On this page of our guide to Resident Evil 3 Remake you will learn how to successfully defend yourself against a horde of zombies in the Hospital. Carlos will take part in this defensive mission. This will happen shortly after he gets the vaccine. This is one of the most difficult battles in the game. Fortunately, our guide contains a step by step walkthrough - we explain how to survive the invasion of a zombie horde. 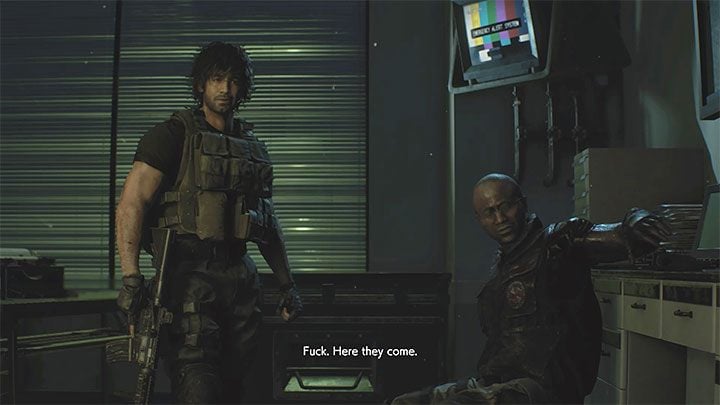 Tyrell will inform Carlos that a zombie horde has appeared near the hospital. Take advantage of the fact that you can use a typewriter to save your game and storage chest to replenish your ammo and healing supplies. 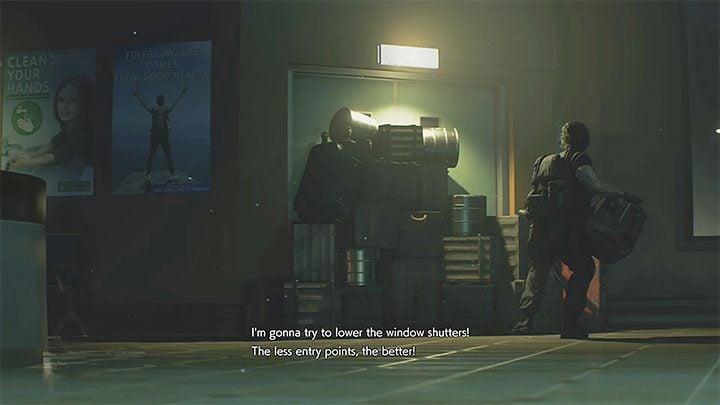 After you enter the lobby, a cutscene will be displayed (a video in which heroes barricade the entrance). The attack of zombie horde will begin. 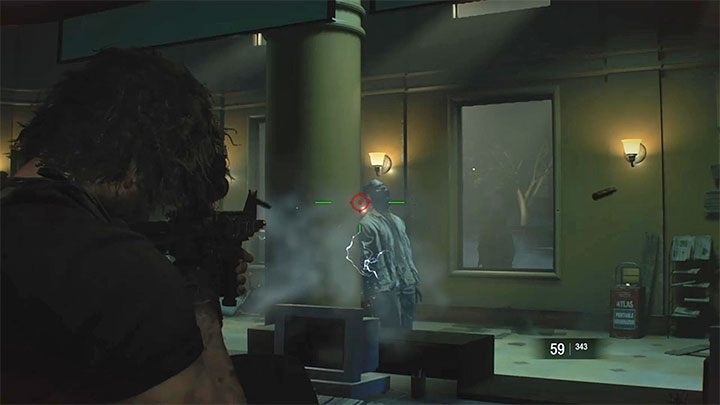 Zombies will enter the lobby through the windows. Shoot only those that are currently squeezing through the window or have already entered the building. Don't attack zombies that are still outside. There are generators near some shutters - aim at them especially if there is more than 1 zombie near the generator. The monsters will be electrocuted. You can take advantage of this opportunity to attack other incoming zombies, or to target the paralyzed monsters (standing or lying on the floor) more easily.

Look around a lot during the battle so as not to let any zombie surprise Carlos from the side or from behind and bite him. It's a good idea to stand behind the reception counter in the lobby, forcing the monsters to approach Carlos from only two possible directions. 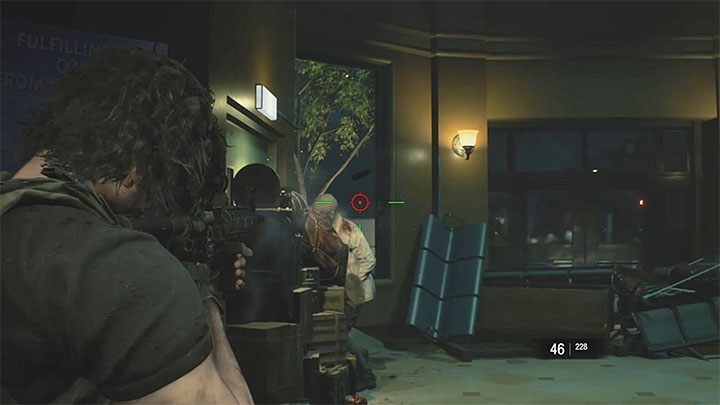 Some zombies will try to break through to the room with injured Jill. They will specifically try to destroy the barricade leading to this room. Eliminate these types of zombies in the first place in order not to fail the whole battle with horde of zombies too early.

In the lobby, you can find numerous items and supplies. Use then if needed, but they will be more useful only in the final phase of the fight. 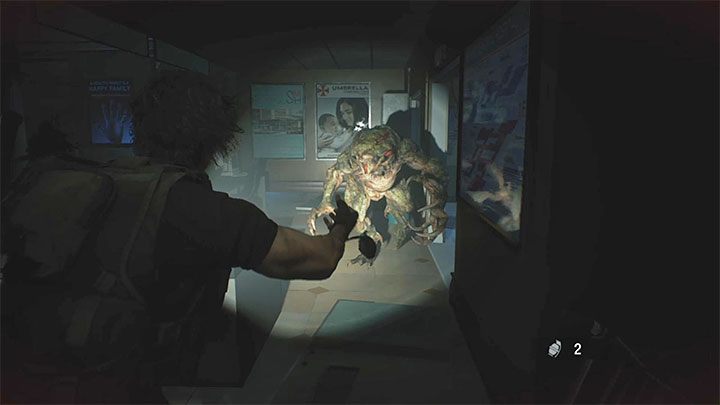 After sufficient advancement in battle, the light will go out. Then, the side room will open. You have to be very careful, because the new Hunter Beta enemy will run out of the side room. We advise you to focus your attacks on him as he is by far the most serious threat to Carlos. You can use a frag grenade to quickly defeat a Hunter. 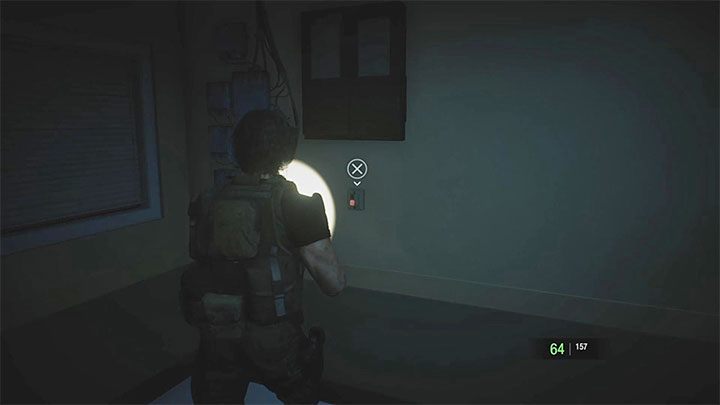 In the newly unlocked side room you will find, among other things, a hip bag, which you can use immediately to collect more items from the area (2 new inventory slots).

Also, there is a switch that allows you to restore the power supply to the lobby. It'll make it easier for you to track down the zombies that appear in this location. 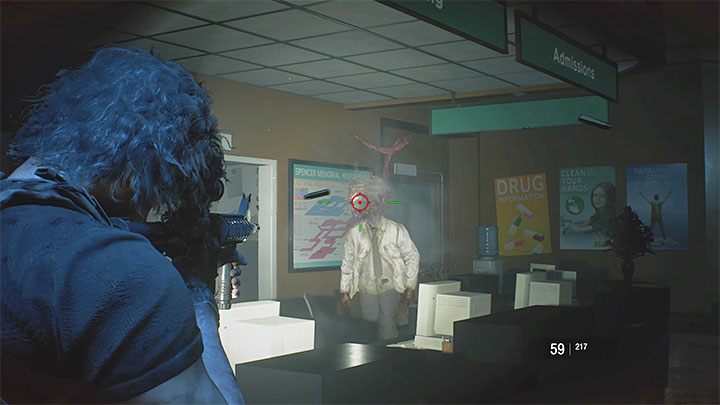 In the final phase of the battle, some zombies with parasites on their heads will also start to appear in the lobby. Try to attack them from a long distance so as to prevent them from attacking Carlos with their tentacles if possible. Don't let them catch the hero either - you can die more easily in this way in contrast to common zombies. 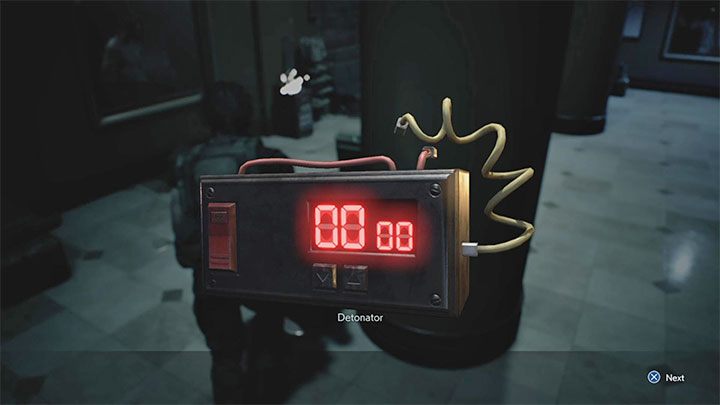 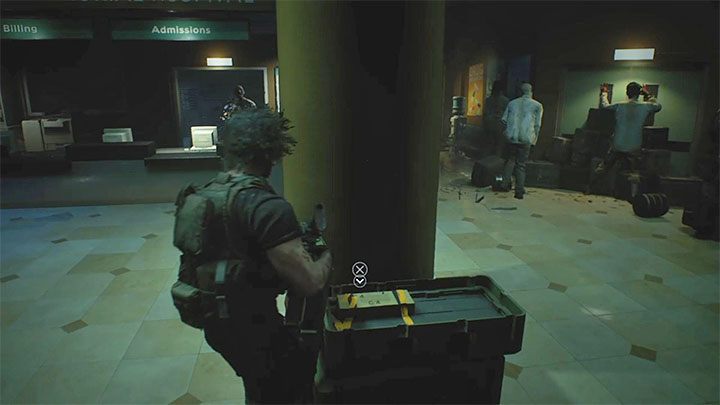 Fight until you will watch a cut-scene that shows how the horde breaks into the lobby. In the crate next to one of the round columns there is a detonator. Combine it with explosive charge (C4) which is also stored in the suitcase.

Hold out until the explosion 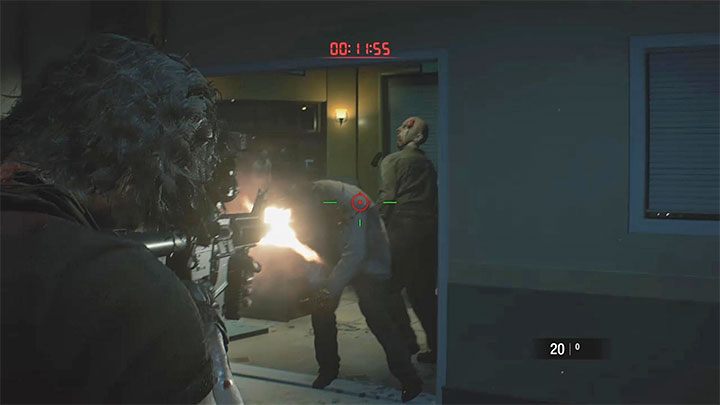 At the very end, you must defend yourself for 30 seconds. It's best to get as far away from the horde as possible and fire from a long distance. It's a good idea to hide in the side room - zombies can only approach Carlos from the entrance to the room. If you have any frag grenades in your inventory, then you can also use them to attack groups of zombies.

After the countdown, the C4 explosive charger will explode. The main entrance to the hospital will collapse. You will stop the horde.