This unofficial guide for Resident Evil 2 contains all necessary information on how to complete the game and discover its secrets. The remake of RE2 has a lot in common with the original game. However, it also has a few things that make it differ from the original. This guide can be useful for both new players and those who have completed the original a few times.

The first few pages contain starting tips that focus on the most important gameplay mechanics such as combat, equipment management, saving your progress, healing or unlocking access to new locations. The FAQ section contains answers to the most frequently asked questions. We inform, e.g. how to increase your inventory space, how to get unique weapons or where to store unwanted items. The guide also has a separate chapter that focuses on trophies/achievements. Read it to learn how to unlock achievements/trophies, including the platinum trophy available on PS4.

The detailed walkthrough is an important part of this guide. This chapter contains step-by-step tips that will allow you to reach the campaign's finale. The walkthrough contains descriptions of mission objectives, puzzles, and fights with monsters - usually, with high-quality pictures as well as maps of the most important locations. The walkthrough section also contains two smaller chapters dedicated to puzzle solutions and boss fights. They should be helpful during the most difficult parts of the game.

Resident Evil 2 from 2019 is a complete remake of the game released on PlayStation in 1998. Besides the visibly improved graphics, the game features a lot of changes. One of the most important ones is the camera - instead of being static, it is now placed behind the hero's back. However, other mechanics know from the original remained unchanged - the heroes need to use their ammo and supplies wisely, the inventory is limited, and the game can be saved only in specific places.

Below you will find all most important hints in a nutshell to help you keep your heroes alive and reach the grand finale of this adventurous horror story. 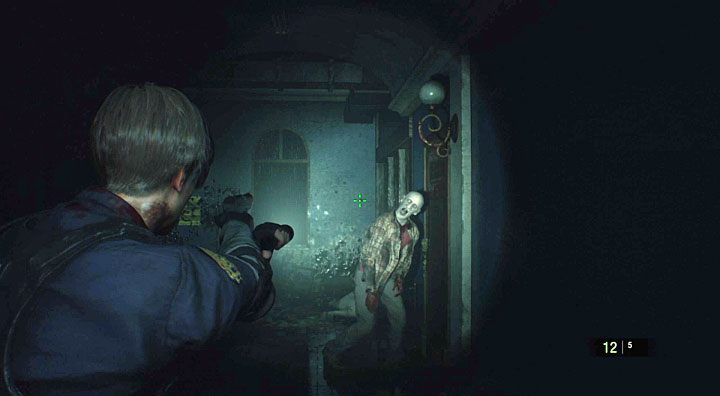 1. You don't have to fight every monster you meet. Resident Evil 2 is a game in which even weaker enemies may require a series of attacks before they die. Trying to eliminate them all can quickly deprive you of ammunition and medication. If you are dealing with e.g. a zombie standing in a wide corridor, it is a better idea to bypass him. Join the fights if you want to thoroughly examine the room, if the monster "guards" the access to an important object or if the passage is too narrow to pass the confrontation. 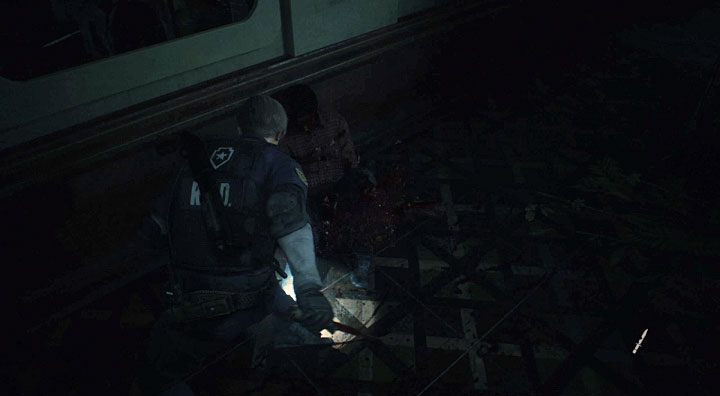 2. Kill the wounded zombies with a knife. Always try to get the weakened zombie to fell over or temporarily lose its balance. You can use this opportunity to start dealing damage to the zombie with your knife. Depending on how strong the monster is, it can die before it gets up of the ground, or it will be weakened significantly after the resumption of battle. This method will save you a lot of ammunition. The knife can also be used to attack stronger monsters like Licker, but this is much riskier. 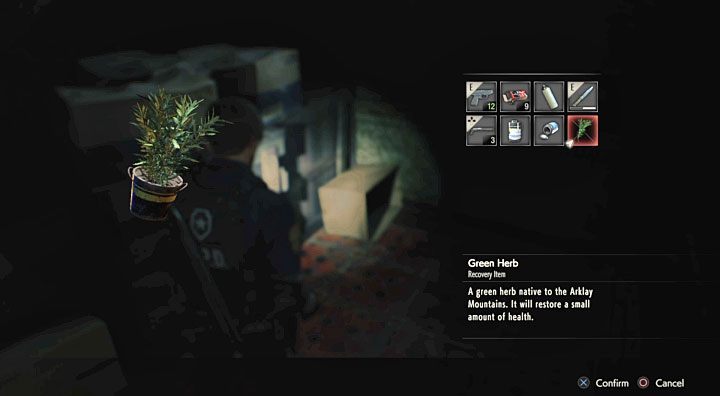 3. Skillfully manage your inventory. The inventory of the main heroes has very limited capacity and as a result it is easy to fill it up. This can make it difficult for you to continue the game by preventing you from raising new supplies or quest and story-related items. Store unnecessary items in chests. It's always good to have 2-3 free slots in your inventory, so you can pick up all newly found treasures on the fly. 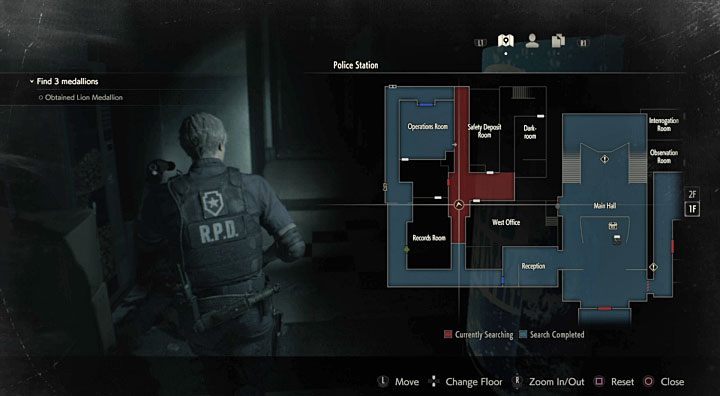 4. Look at the map quite often. It is very helpful in determining which areas have already been examined (blue on the map), and where you can still look at. You should carefully examine all new rooms and return to locations that were not previously available (e.g. until you have found the right key). Locations with typewriters and chests (item storages) are also marked on the map.

In the game world you can also find ready-made maps of the area. They make it easier to find out what places you can still visit. Examples of ready-made maps are those from the Operations Room and Lounge in the police station (floor 1F). 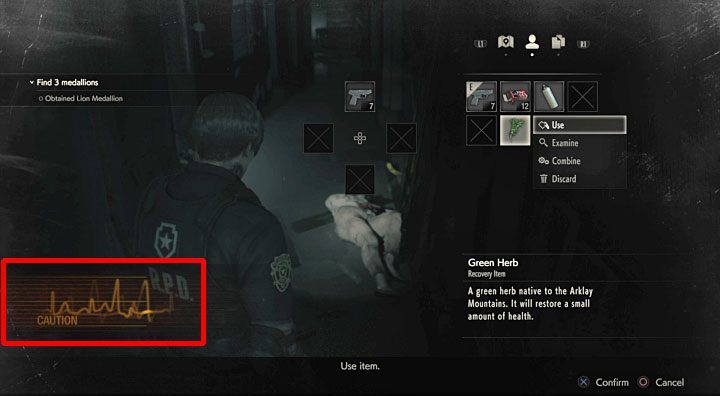 5. Avoid further area exploring with a seriously injured character. You can check the hero's state of health not only by his appearance, but also by looking into the inventory (lower left corner of the screen with health status). You don't have to heal every smaller wound immediately, but for more serious injuries (especially those marked in red) it's not worth postponing the treatment, because you may lose much progress in case of death. It is a good idea to always have sprays and/or medicinal plants on your equipment (we have described the plant combinations on the separate page of this guide).

Is there a VR mode in Resident Evil 2 Remake?

Unfortunately not, the new version of Resident Evil 2 does not offer support for PSVR or any other VR goggles. There are no plans to add support for VR technology in the future. Game developers explain this state of affairs by placing the camera behind the hero's back (as opposed to the FPP view from Resident Evil VII).

Is there a Denuvo protection system in RE2 Remake?

Yes, the version for personal computers, like all other latest productions from Capcom, has DRM Denuvo protection.

Is there a scalable difficulty level in Resident Evil 2 Remake?

Yes. Resident Evil 2 Remake offers an adaptive level of difficulty, which was also present in earlier major releases of the cycle starting with RE4. The difficulty level of the game adapts to the player's actions on an ongoing basis. A better game will result in an increased difficulty level - zombies can become more sturdy or additional monsters can appear during the ongoing battles. If the game notes that the player is not doing as well, it will automatically lower it slightly.

In addition to the adaptive difficulty level, RE2 also offers Hardcore mode. It is a completely separate mode from the standard campaign offering a much higher level of challenge, as well as the ability to unlock several additional trophies.

Is there a Tofu Mode in Resident Evil 2 Remake?

Yes. As a reminder, this is a secret mode that appeared in the original version of Resident Evil 2 (and also in Resident Evil: The Darkside Chronicles). It allows you to go through the campaign playing the title (heavily oversized) cottage cheese. It will be available to unlock in the RE2 Remake. We expect that due to the combined scenarios of Leon and Claire, there will be other requirements to unlock Tofu.

Is it possible to finish the demo of Resident Evil 2 Remake before the time limit?

The Resident Evil 2 Remake demo allows you to spend up to 30 minutes in the game. It may seem like a little time, but you can finish the demo prematurely and even in a few minutes. We have described it later on.

In order to avoid losing unnecessary seconds, pause the game when you need to e.g. check the solution of the puzzle. After switching on the pause menu the limit counter stops until the game resumes. This does not apply to viewing the map and inventory - the counter will then continue to count down the remaining time until the demo ends.

Is new Resident Evil 2 an exact remake of the old game?

Resident Evil 2 from 2019 is a remake of the famous survival horror game from 1998. On this page we answer the question whether the new version of RE2 is a remake in 100 percent faithful to the original. 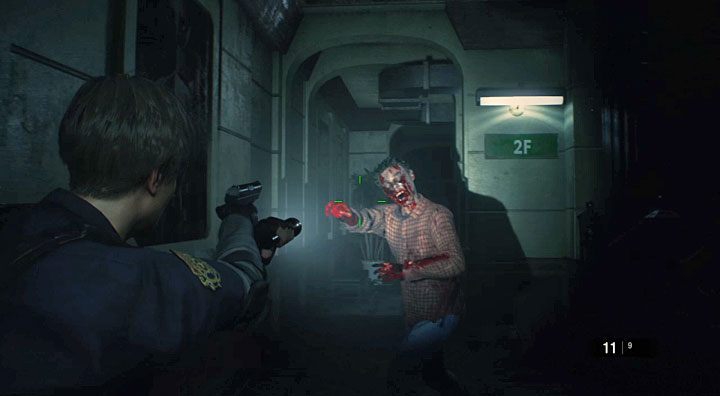 No, there are many important changes in the 2019 production. This is due to the development process of the new version of the game and the fact that the original production contained many archaisms. The most important change is the abandonment of static cameras in favor of a dynamic camera placed behind the hero's back. In addition, unlike the original, it is possible to fire without stopping the character. These changes forced, among other things, the different location of opponents and modifications in how monsters can attack the protagonist with surprise.

Equally important modifications include the way the game goes. In the original game, the scenarios of Leon and Claire not only overlapped with each other, but also the decisions made or actions taken could affect the second scenario. Remake significantly simplifies this mechanism. Separate scenarios are still available for the two main characters, but each of them is autonomous and none of the actions performed affects the scenario reserved for the other character.

The changes also included an audio layer. The creators had to give up static sound sources and develop these elements from scratch. A new soundtrack also appears in the remake, although those who buy a collector's edition or a Deluxe edition can alternatively choose a classic soundtrack.

In which versions Resident Evil 2 is available?

Remake of Resident Evil 2 is offered in several versions with different content. On this page you will find a full list of them.

It only offers bonuses for people who choose to place a preorder for the digital version:

It offers the same bonuses for those who choose to pre-order the digital version. In addition, this version allows you to download the Extra DLC package for free. It includes the following items: 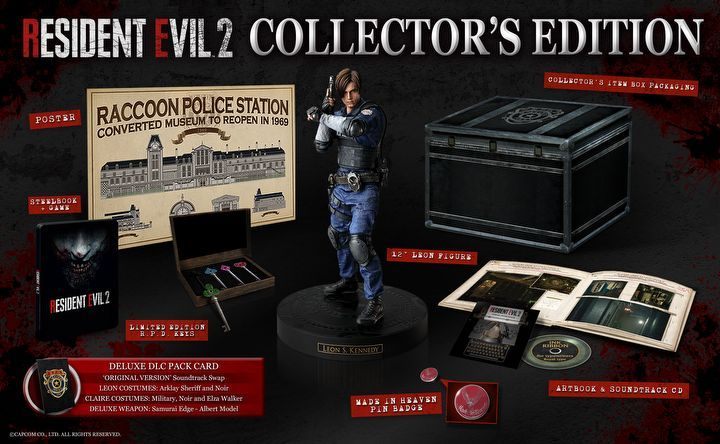 The retail European Collector's Edition has the following elements to offer: 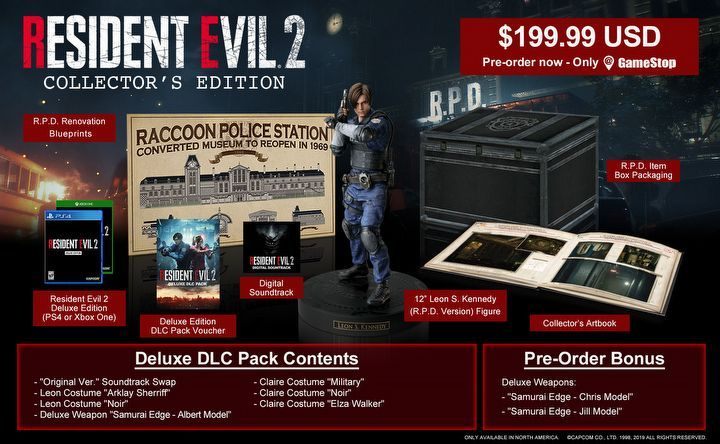 The retail collector's edition intended for the American and Canadian markets is offered for purchase exclusively by GameStop and EB Games chains. It offers the following elements:

We All Yearn Fresh and Innovative Games  Except We Don't

I can't believe some people out there, in the depths of Internet. They start a game with ranting about lack of innovation in games, and end it with a game of the most formulaic multiplayers. But when they actually get innovation, they frown.