This section of the guide to Remnant From the Ashes contains a detailed description of the Canker bossfight. You will find out what attacks the boss has, what battle tactics are suggested, and what secrets/rewards the defeated boss drops.

Canker is a boss which rarely performs attacks on its own. His attacks consist in running in one direction, spreading seeds that can be treated like mines in the arena, and blasting with a wave of water that deals damage and fills the arena with water. 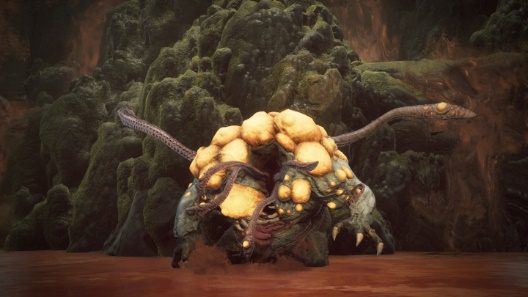 The most important tactic is to beat him as quickly as possible, because the longer he lives, the more water will be poured to the arena. Attack him while he is running and setting up bombs on the ground. The run is not that fast and quite linear, so you will have no problem to avoid the boss. Run lasts a very long time, so this is a great opportunity to deal him some damage. Usually, after the run, the mobs respawn, which can sometimes be joined by an elite mob. Deal with them, then kill boss.

Water wave can be avoided at first by moving sideways, but with time it will be useful to use sideway rollover. The more water, the less visible the bombs will become, so try to remember where Canker ran last time so that you don't accidentally fall into these bombs. Bombs do not inflict too much damage, but they do impose a Corrosive status, which reduces the armor's effectiveness. Bombs disappear after a while, but if you don't want to wait for them to disappear, you can shoot them down with your weapon.