This section of the guide to Remnant From the Ashes contains a detailed description of the Mangler bossfight. You will find out what attacks the boss has, what battle tactics are suggested, and what secrets/rewards the defeated boss drops.

Mangler is an improved version of the elite enemy the Root in the form of a boss. In the first phase he is very small, like a normal mob, while in the second phase, grows to large sizes. 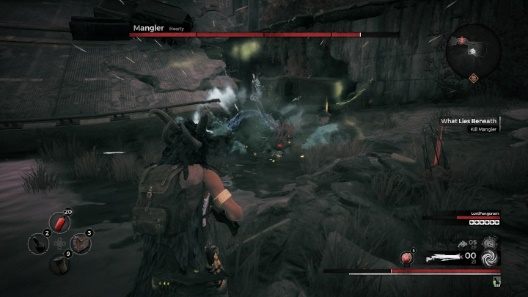 The first phase is very passive, the only thing he does is run up to the player and hides under the ground to call for reinforcements. When you see him rolling towards you, dodge to the side and try to shoot it. As soon as he starts calling for reinforcements, eliminate them. Only then attack Mangler.

When his health falls below 50%, he starts to grow, thus becoming easier to hit, but also a bit more dangerous. He now gains an attack that allows him to get off the ground, jump on the player and attack with a series of cuts. When you see him jump on you, roll backwards to avoid his attack. The whole fight is really troublesome in terms of reinforcements, since this boss can accumulate them quite a lot on the battlefield. When killing reinforcements, also keep in mind where the boss is, so you won't be surprised by an attack from behind.