The Ent, as the name suggests, is a large treant. This is a very slow opponent who lacks skills in terms of maneuverability, however, he is very dangerous and resistant to damage. He can perform a lot of areal attacks. And he is aided by exploding mobs. 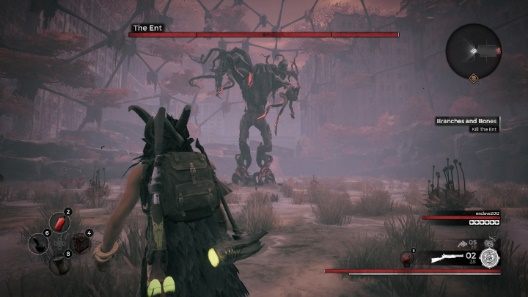 Before fighting with Ent, prepare Ammo Boxes, because the fight with him will last for quite a long time, and you might quickly exhaust the supply of ammunition and Oilskin Tonic, since most of his attacks, imposes a state of Rot. His weak spots are mainly legs and back (in the moment when he starts to shoot projectiles).

It's good to keep an average distance while fighting him, because then you'll have plenty of time to avoid its seismic waves. Stomping is an areal attack, the animation of this attack lasts a very long time, so you have plenty of time to run as far away from him as possible when he performs this attack. Its area is large enough, it is also best to move away from. His hand blow is a similar attack, yet from a larger distance and much more powerful. Avoid it by running sideways.

When you see that sticks his hands into the ground and stays in this position, it will shoot at you with bullets that cause areal damage and impose the Rot condition. The easiest way is to just run until it stops shooting, but you can always give one shot at it, make a dodge at the moment when the ball falls, and repeat the pattern until the Ent finishes shooting. When he has less than half his HP, he will start screaming and the character will not be able to move for a while. It's a sign that reinforcements are coming.

If you hurt the Ent's legs enough, it will fall, resulting in a close-range attack. He will also shoot projectiles at you. It's easier now to get to his weak spot on his back when he is lying on the ground.