Onslaught wields lightning and teleportation. He can quickly move anywhere in the arena. In addition to lightning, he can also perform melee attacks with his weapon. 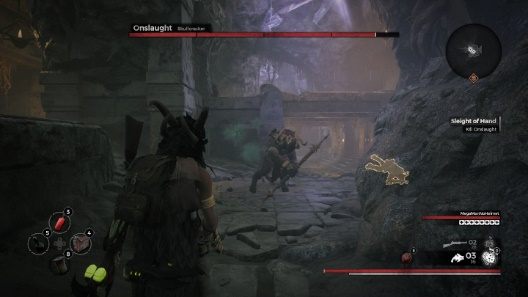 Fighting Onslaught at close range is the best option. Provoke him to stop the use of teleportation, and he will try to attack the player with the 3 hit combo. To avoid it, it is enough to step back when he is performing the first blow. However, when you see him move right at you, you have a moment to dodge back to avoid the explosion. It does not deal too much damage, but throws the hero off balance.

Mobs are problematic, as they help Onslaught to fight. There are two kinds of them. There are the winged beasts that shoot electric bullets, and the warriors who teleport very often, making it difficult to defeat them. Also, after you kill them, you have a minute to move away from them because some time after they die, they will explode.