This section of the guide to Remnant From the Ashes contains a detailed description of the Harrow bossfight. You will find out what attacks the boss has, what battle tactics are suggested, and what secrets/rewards the defeated boss drops.

One can encounter either Harrow or Claviger. His attacks are mostly claw swings, which have a fairly large range. His weak point are its feet and head, so make sure to aim at these body parts. 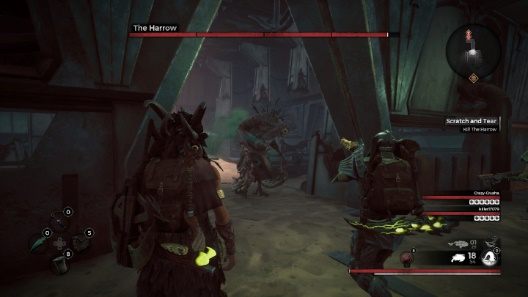 Upon entering the arena, The Harrow will be in front of you. Possibly, he will charge. Shoot him until he is next to you. When it gets close, perform a roll forard to avoid being hit. Attack mainly his legs and head. If you shoot him in the legs enough times, he will fall to the ground so you have time to deal damage to him. Moreover, there is a harpoon behind his back. You can take it when he's on the ground. When you dothat, you will get it as a reward for defeating him instead of anoter reward you will learn about later.

The main problem are the cramped rooms at the bottom of the arena, go down there only if necessary, it is not enough that there is not a lot of free space, you can get stuck inside with no exit, and you will have to return to the place where the boss and his reinforcements are. Avoid his 3 hit combo by doing forward rolls while moving away as far as possible. If you deal enough damage, he will start to run away, calling the reinforcements. In this time deal with mobs, to not fight with the reinforcements and the boss simultaneously. If you do not want The Harrow to run and call for reinforcements, you can get in his way at the time of his escape, which will provoke him to attack you.