This section of the guide to Remnant From the Ashes contains a detailed description of the Shade & Shelter bossfight. You will find out what attacks the boss has, what battle tactics are suggested, and what secrets/rewards the defeated boss drops.

This is a Duo of Golems, one of them (Shade) fights at a distance, and the other (Shatter) engages in melee combat. This duo can even perform a combined attack. They are also reinforced by Lurkers (the same as in the fight against Undying King). 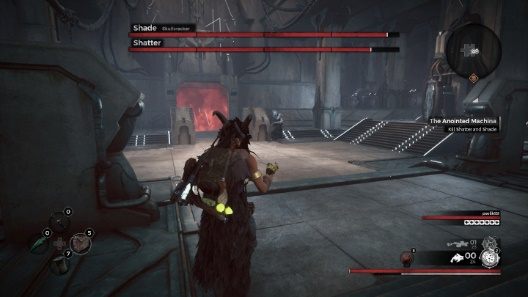 Before the battle, you should equip Heavy Water Elixir, because attacks of this Duo may cause the Radiation status. In both cases, their weak spot is the head, more precisely the mark on their head.

First take care of Shatter, hiding at the same time from the Shade's ranged attacks, or simply avoiding them. Shatter will charge at you from the start, so aim at his head as soon as you notice him running. When he gets close enough, he'll attack, so get ready to Dodge. Then it's good to move a little away from Shatter, avoiding Shade's long-range attacks. Sometimes this pair will run towards each other to perform a combined attack. When you see them performing that, try to avoid the projectiles that will follow you. At the same time, Lurkers will begin to appear, knock them out, only then take care of the bosses. To cancel their attack, you need to destroy the barrier surrounding them. Shoot at it a few times. That should be enough.

After you defeat Shatter, you have to fight only Shade. Still, keep your distance, there's no reason to approach him. Shooting at his head from a distance will give more time to react by dodging. Watch out for his radioactive bullet, this is a good opportunity to attack him several times, but remember to evade at the moment when he raises his staff.