This section of the guide to Remnant From the Ashes contains a detailed description of the Raze bossfight. You will find out what attacks the boss has, what battle tactics are suggested, and what secrets/rewards the defeated boss drops.

Raze is one of the dungeon bosses you will find in the Rhom. This is a triangle-shaped boss who can fly, summon skulls to help and, if necessary, to attack with fire. 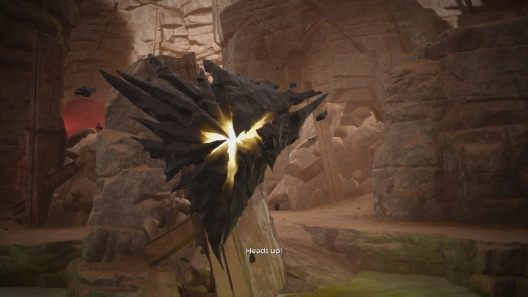 Before the fight with Raze buy Ammo Boxes and Hydro Coolants. Shooting his reinforcements may consume a lot of ammo, and his attack puts your character on fire. Its weak spot is the center of the body, the yellow field. You will be able to hurt the weak spot, however, only when it "opens" showing its yellow field in the body. He does this when he starts screaming, calling in units or attacking.

When you target him during the boss's inability to attack, he'll probably make a big sidestep, keep that in mind. Raze's reinforcements will interrupt the fight- that is the skulls attacking with dark matter. Raze can also summon skulls, which will follow the player at high speed. When they are close enough, they explode, dealing damage and imposing Radiation status on the player. Killing skulls is easy, but their number is a problem, try as quickly as possible to overcome the power of the boss, and only then do the boss.

His attack, fire projectiles, imposes the condition of a Fire upon impact. He fires several fire projectiles at the player. To avoid this attack, it is best to dodge to the side, but keep in mind that the farther you are from the boss, the more chances that you will have time to dodge. Use surroundings to hide from boss's attacks.