This section of the guide to Remnant From the Ashes contains a detailed description of the Root Horror bossfight. You will find out what attacks the boss has, what battle tactics are suggested, and what secrets/rewards the defeated boss drops.

The fight against Root Horror is a weird one. During the first encounter, after you bring its health to 50%, Root Horror will simply disappear from the arena. You will fight it again in a different location, usually where you meet NPC (Stuck Merchant) selling a ring for 100 thousand scrap. However, Root Horror is not a demanding boss. 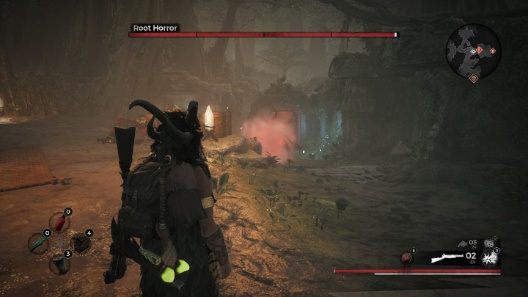 In both cases (on the first and the second arena) the battle is very similar. Try not to come too close to the boss, keep your distance, and start by killing its minions, as they can greatly interfere during the fight. Focus on Root Horror's head, it's the weak spot.

When the creature performs a bomb throw, avoid it by moving in any direction. This attack is slow and gives you a lot of time to react. However, you need to keep in mind that the bomb leaves a cloud of smoke behind, and standing inside of it fills the Rot status bar. As soon as you get close to the boss, he will perform three attacks. Avoid the first two by rolling forward (these are horizontal attacks). The last one can be avoided by rolling aside. As for the explosion, it's best to avoid it by running around the arena when you notice the creature putting its hand into the ground. When you avoid the explosion, shot the creature in the head as much as possible in order to inflict additional damage.