Stormcaller is one of the less demanding bosses. As the name suggests, he wields the power of thunders. He keeps a distance from the player. He is also accompanied by a lot of mobs who make this fight slightly more difficult. 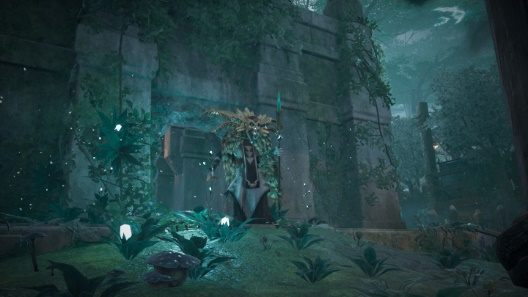 It is necessary to wear armor with the highest protection against electricity. All of Stormcaller's attacks are based on this element. If you are having trouble avoiding his attacks, Adrenaline should help.

You have to be on the move at all times during this fight, as Stormcaller can attack with a series of lightning bolts that appear where the player is. Moreover, a large number of mobs forces you not stand in place. Take care of the reinforcements first and then start attacking the boss.

Aim for the boss's head (his weak spot), preferably with a weapon that deals large damage with one shot. Avoid the orbs simply by walking/sprinting - there is no need to dodge them. Stormcaller starts using lightning only when he stands still - he raises his head up while screaming. Then, lightning will begin to fall from the sky - look out, this is his only attack that can be a threat to your character. Dodge when you notice the lightning appearing above you. Pay attention to the sky to avoid getting surprised.