This section of the guide to Remnant From the Ashes contains a detailed description of the Ravager bossfight. You will find out what attacks the boss has, what battle tactics are suggested, and what secrets/rewards the defeated boss drops.

The Ravager is a wolf boss that you will have to face in a huge arena. His attacks are very fast. In addition, he can carry three mobs on the back that help him in battle by shooting the player. 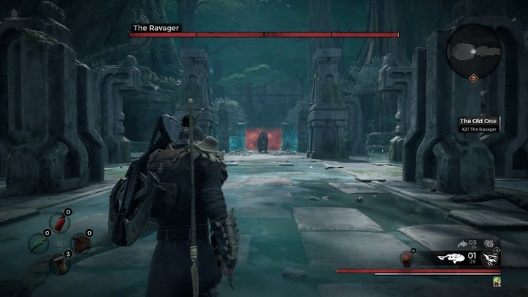 Try to keep the average/far distance from the Ravager. Close range can be lethal, so it is better to fight the boss at a distance. Every time the boss comes up to you, he will make a claw attack or try to bite you. Avoid these attacks by dodging in any direction, but remember that the attacks are pretty fast, so you need to react quickly. Shoot him as much as possible whenever you get a chance. Sometimes the Ravager will try to escape from the battlefield, only to return in a minute with reinforcements on his back. The best way to deal with this situation is to use a weapon that deals area damage - the opponents are concentrated in one place, making them an easy target. If you don't have such a weapon, focus first on killing the mobs and then on the boss. If you don't kill them quickly, they will jump off the Ravager and start attacking you while moving freely around the arena.

When the Ravager leaps high into the air, he will try to attack you with thunder, which can cause a lot of damage upon hit. You can avoid it by dodging in any direction, the attack happens when the wolf lands on the ground. When you are very close to him, he will attack you with his claws 3 times. Back off when performs this attack.

An interesting fact is that we don't even have to fight the Ravager. When you enter the arena, the boss lies in his cave. There are many bells in the arena - if we shoot them in the right order (you need to find the instruction in earlier locations), the Ravager will be ready to talk to us. This allows us to avoid fighting him - in return, we will get another item from him.