Butcher of Blavi... Iskal. The Unclean One is a large boss looking like a butcher. He holds a giant hammer in one of his hands. Don't let his appearance distract you, this boss is faster than you may think. 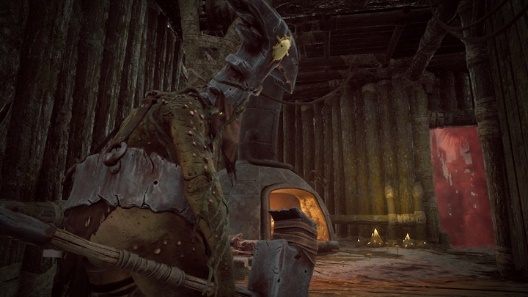 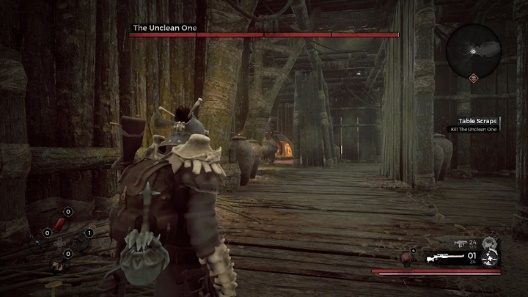 It is hard to really say what tactics against The Unclean One are the best. If we stay close to him, we will provoke him to use mostly regular attacks, but he will perform them quite fast. In turn, if we fight him at a distance, we will have to prepare for his jumps and hammer throws.

Try to keep a medium distance - he will more likely walk towards you rather than leap. However, the latter is possible, too. If he jumps, the best option is to dodge towards him - you will get behind his back. This is very important because his two weak spots are his head and... buttocks. You can also provoke him to use a hammer throw. This move is highly telegraphed - the boss raises up the hammer and throws it at the player. If you don't avoid it, you will get quite a lot of damage. In addition, it will push you a few meters back. However, if you manage to avoid it (you do this when the boss hauls the hammer off and when his leg falls to the ground), you will have a lot of time to attack. The Unclean One is very weak without his hammer. He moves automatically to pick it up. This is a great opportunity to cause him a lot of damage aiming at the head or buttocks.

The whirlwind attack can also be problematic. It lasts a very long time, despite the fact that it isn't very accurate. However, be careful as this attack destroys the environment. The advantage is that it also deals damage to the reinforcements. It is important to always shoot him in the head, or make dodges in his direction to get behind the boss. You don't have to attack his minions since The Unclean One can kill them with his attacks. But if they are troublesome for you, nothing stands in the way of killing them and then focusing on the boss.