This section of the guide to Remnant From the Ashes contains a detailed description of the Ancient Construct bossfight. You will find out what attacks the boss has, what battle tactics are suggested, and what secrets/rewards the defeated boss drops.

Ancient Construct is an optional boss that can only be fought when you earn Control Rod (this item is available after defeating Maul). Initially, the Construct will lie motionless next to the store belonging to Wud, an NPC. Approach the mini-boss and you will be able to insert the Control Rod into the chest. After that, you will automatically start the fight. 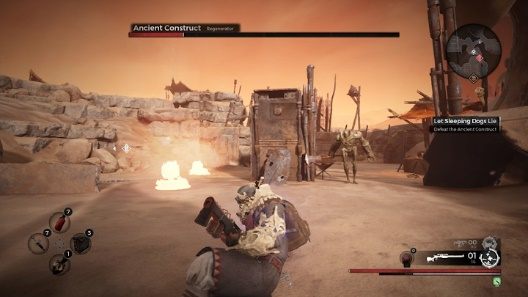 Always focus on destroying the turrets first. Individually, they don't do very much damage, however, if you don't focus on them and start fighting Ancient Construct, you can run into a situation where your health bar will start dropping rapidly. As soon as we're in their line of sight, they'll start shooting at us. You can hide behind covers - if you do that, you won't have to focus on eliminating the turrets (if they don't see you, they won't shoot).

As for Ancient Construct, try to keep the distance, provoking him to slowly move towards you or to use the charge move. Avoid the charge only when it is very close and starts swinging its weapon - you can avoid this attack by rolling in any direction. When the Construct is very close, it won't use the charge. Instead, the mini-boss will attack with a single swing - avoid it by rolling backward. The orb inflicts Radiation status upon hit. The mini-boss usually uses it when you're too far away from it. If you have trouble avoiding the Construct's attack, Water Elixir will prove useful.