Maul is one of the more dangerous dog opponents, which serves as an optional mini-boss. However, he won't be that much of a problem if you defeat its reinforcements fast. Maul can also be assisted by Houndmaster, an NPC we can upset during the dialogues, asking about his story or by shooting the dogs. 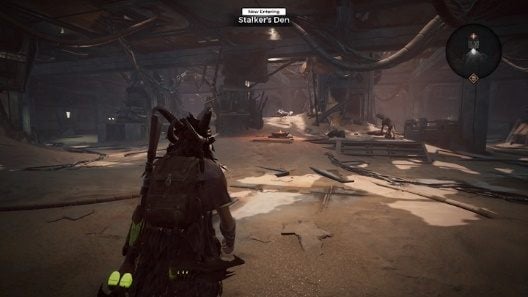 While facing Maul, the first thing you have to do is kill as many hounds as possible. They should be your priority because the more of them are in the arena, the less chance we have of defeating the mini-boss.

After eliminating the small dogs, focus on attacking Maul - it doesn't matter what body part you shoot. It is important to avoid his attack at the right moment - when he is already leaping towards us. You can also attack Maul while the creature is howling - it takes a little while before reinforcements arrive, and the mini-boss stands still in one spot. The main tactic is not to let the hounds surround you - kill them quickly and then attack Maul with everything you have.

Houndmaster, an NPC that controls Maul, can help the creature in battle. He attacks with a single shot. Try to focus on his head and the horns - you can knock an object that he uses to control Maul. Once we do it, Maul will also start attacking the Houndmaster. Also, the player will gain access to this item after defeating the mini-boss.