This section of the guide to Remnant From the Ashes contains a detailed description of the Claviger bossfight. You will find out what attacks the boss has, what battle tactics are suggested, and what secrets/rewards the defeated boss drops.

Claviger is a boss who uses lasers, Orbs and Golems. He leans on the arena and we only see his upper body. Interestingly, Claviger can rotate the arena to his liking. 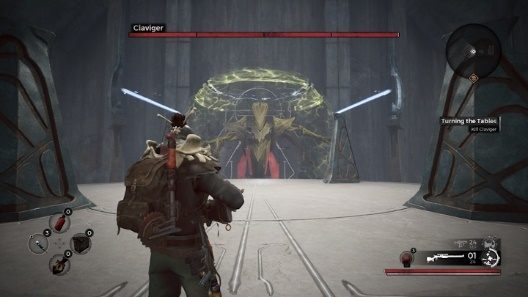 Try to stock up on a few Ammo Boxes because the fight with Claviger can take some time. At the beginning of the battle, Claviger is always surrounded by Protective Shield created by his two orbs. You can't damage him until you destroy the orbs. Focus on them first and then attack Claviger.

Once they are destroyed, you can fire at the boss from a safe distance. It is better not to get closer to him because his attacks will hit us much faster. Besides, there is also a chance that we can fall out of the arena. Claviger will eventually summon his Golems to help. Kill them as soon as possible- shoot them in the head, this is their weak point.

Sometimes, it's worth hiding behind cover if we have a problem with killing Golems. There are 4 covers on the arena, however, they can be quickly destroyed by one of Claviger's attacks. He attacks in two ways, with a ray or electric orbs. The ray is easy to avoid, just go to the side, and when you get to the end of the arena, move to the other side, jumping over the ray. It won't hurt you unless you don't jump over it in time. However, you won't receive much damage.

In turn, his second attack is a little harder to avoid because the electric orbs are rather fast, giving no time to counterattack. Avoid them by rolling to the side. For both attacks, shoot straight to the center where he folds his arms. When he gets enough damage, he will stop attacking. Then, he will likely summon reinforcements, rotate the arena or restore his shield.