This section of the guide to Remnant From the Ashes contains a detailed description of the Scourge bossfight. You will find out what attacks the boss has, what battle tactics are suggested, and what secrets/rewards the defeated boss drops.

Scourge is one of the mini-bosses in Remnant: From the Ashes. The appearance resembles a humanoid figure wearing a beehive on the head. The hive is his main weapon, which should be avoided at all cost. This is an improved version of the opponent that the player could have met before. 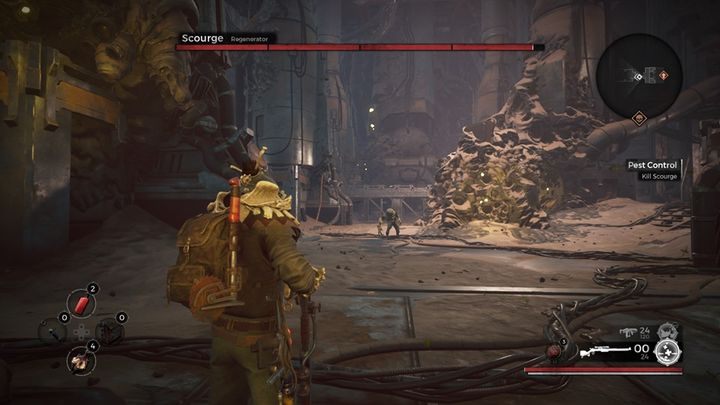 Before the battle, it is advisable to stock up on Heavy Water Elixir (nullifies Radiation). Both the boss and his suppoer have attacks that inflict Radiation damage. When it's applied, your stamina is reduced by half.

At the very beginning of the fight, Scourge will be slowly heading in your direction, this is a good opportunity to deal damage from a distance, while remembering to avoid shooting in the head (the hive). Otherwise you will release many insects from the hive, and they'll attack. Over time, he will be aided by 2 mobs that activate local poison clouds after they're killed, causing Radiation damage - avoid them.

When Scourge gets moderately close, it is likely to perform a claw attack. It is necessary to avoid it at the time when he's taking a Swing. No matter which way the attack's directed, it's important not to dodge too soon or too late. As soon as it gets close, it will attack with the ground rumble, resulting in an explosion of radiation. It's a pretty fast attack - expect it only when you're very close. Immediately roll back when you see his hand go up in the air to deliver the attack. When you see Scourge surround himself with a barrier made of swarm, stop attacking and focus on dodging. In this state, you cannot cause any injuries.

Try to kill reinforcements first, bearing in mind the fact that after killing they explode and cause additional damage. If the opponents manage to apply the radiation debuff, use the Heavy Water Elixir.