This section of the guide to Remnant From the Ashes contains a detailed description of the Root Mother bossfight. You will find out what attacks the boss has, what battle tactics are suggested, and what secrets/rewards the defeated boss drops.

It is hard to call this a boss fight, because it is really the player who has to protect the supposed boss from being killed by The Root. After talking with the mother, the fight against The Root begins. The enemies' main target is The Root Mother, not the player. We must protect her at all costs. The Root Mother must survive at least 2 minutes after the attack begins. 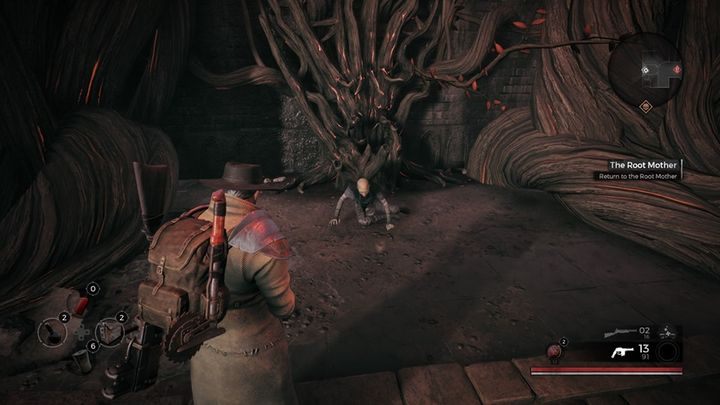 We will be attacked by three types of enemies - Devil, Slayer and Hulk.

At the very beginning of the fight, you will be attacked mainly by Devils. However, over time, Slayer and Hulk units will arrive. It is recommended to take care of the Devils as fast as possible. They are the easiest to defeat, and there are many of them, moreover, they are a great resource of ammunition. As for a Hulk, make him focus on you instead of The Root Mother. Once you do that, deal with him in the same way you dealt with Gorefist. Slayer, on the other hand, will stay away from you. He shoots triple series at a short time interval. If you were his target, shoot him several times in the head after performing a dodge.