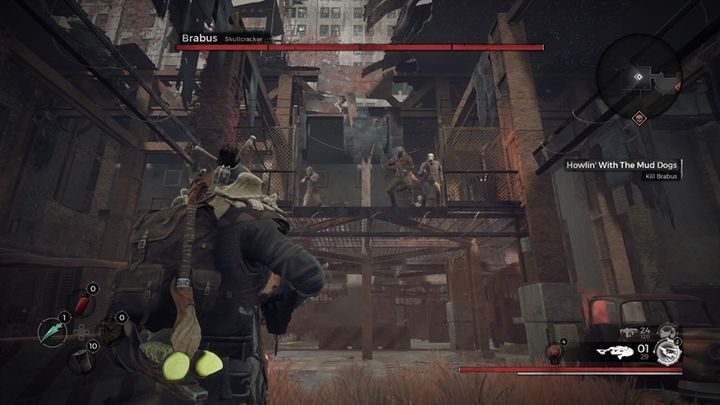 Brabus is a boss in Remnant: From the Ashes and a leader of a gang. He and his gang will start firing you after a brief conversation. The boss isn't difficult, but rather annoying. In combat, he uses his shotgun, which can knock the character (and player) out of balance.

In fact, apart from shooting his shotgun, he doesn't have any other attacks. Unless calling for backup and taking cover counts.

Brabus and his gang will start firing at you right after the fight starts, so the best solution is to hide behind cover and eliminate his reinforcements one after another. This is not a difficult task - crouch and use a weapon that can deal big damage with a single shot (shotgun, crossbow, sniper rifle) because Brabus immediately hides behind the cover after a single shot to reload. That is why it is important to shoot him in the head when he leans out from a cover to shoot. When Brabus hits us, the character momentarily loses balance and shakes slightly, which means that we can't do anything for a while. Once the reinforcements are eliminated (they will arrive from time to time), you can start attacking Brabus from the flank.

There is another way to defeat Brabus, but it is risky. It requires you to literally "stick" to Brabus, that is, to run after him and shoot after he shoots at you. In this case, Brabus will want to escape from the player at all costs, so you can deal free damage. But we have to keep in mind that then we are more open to his gang attacks.