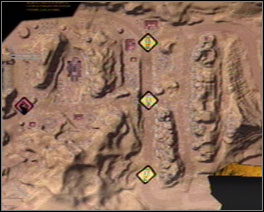 You have to kill some enemies in the marked building #1, and you have to run to all you targets #2. After a while EDF cars will show up. Simply destroy them with rocket launcher, proximity mines or remote charges.

You have to handle with three waves. Every time you will see enemy vehicles on your mini map. You can use ground rocket launcher to strengthen your firepower #1. There will be nothing wrong when some enemy troops will survive. They will simply gather near the marked building waiting for your rockets #2. 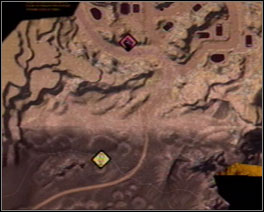 You have to destroy five tanks. The first one will come from the south #1, two others from the north and last two from north and south. Use your rocket launcher #2 (you will need four rockets to destroy them). Refill your ammunition near special chests.

Try to move you character, because your enemies can shoot you with easy. Both infantry #1 and tanks #2.

This site is not associated with and/or endorsed by the THQ or Volition. All logos and images are copyrighted by their respective owners.