This page of the guide features a mini FAQ to Red Dead Redemption 2. It is a list of various questions related to the game, its availability and content. You will also learn in an nutshell what RDR 2 is.

Red Dead Redemption 2 in a nutshell

Rockstar made us wait a long time for the continuation of this amazing franchise. The first part was released on PS3 and Xbox 360 on May 18, 2010. The game received high scores and overall acclaim, won the favor of both - the gaming press and players. After eight years Rockstar Games returns to the topic, but this time the story takes us back in time (RDR2 is a prequel). The famous Dutch van der Linde's gang is forced to fight for survival as a result of an unsuccessful attack in Blackwater. The main character, Arthur Morgan, has to make decisions that will allow him and the whole gang to survive. 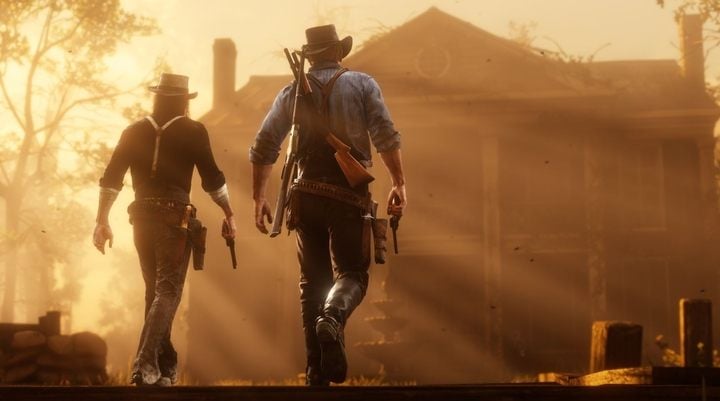 Return to the Wild West in RDR2.

RDR2 is still a third person perspective (TPP) game, although the developers have also added the ability to use the FPP view. Of course, the well-known Dead Eye bullet time system, which allows for quick elimination of several enemies, returns in this part. The prequel is still an open and seamless world game, and the map of the world is literally huge. The world is bigger than in GTA5, and the creators revealed that in the second part of the map known from the first part of Red Dead Redemption, we can also visit New Austin and Armadillo. RDR2 runs on GTA 5 engine, but has been significantly improved for the new project. Engine of the game will use, among other things, the benefits of the Euphoria system, i.e. 3D animation of a character designed by NaturalMotion, covering the whole figure or body muscles. For example, thanks to this, enemies die extremely realistically and spectacularly.

Red Dead Redemption 2 also features a multiplayer mode, called Red Dead Online, which launched a few months after the game's release. It features some story content and allows many players to explore the same world and perform various interactions (e.g. attacking one another, travelling in groups, hunting together). RDR Online installs with the base game by default, but you can also install just the multiplayer component alone.

Season Pass - is it in the game?

No, Rockstar Games did not announce a season pass, just like in the case of the release of GTA5. Perhaps it means that Rockstar does not plan any DLC to single player mode and after the release of Red Dead Online will focus only on releasing DLC to multiplayer.The game does, however, feature many microtransactions related to the multiplayer Red Dead Online mode, which allow you to unlock the available content faster and make the game easier for yourself in general.

Playing offline - is it possible?

The answer to this question is not so straightforward. On PC, you need to log into the game servers each time you launch the game. The console editions do allow for playing offline, but for obvious reasons, the Red Dead Online mode is not available then.

Is Red Dead Redemption 2 a prequel of the first title?

Yes, the events in RDR2 were set in 1899, they precede the events from the first part. In the second title the Dutch van der Linde gang still exists, and it includes the main character of the first part, John Marston, as well as the main character of this title - Arthur. Marston is still an active member of the gang at that time, and the whole game tells the story of a breakdown and collapse of a criminal group and explains what exactly led Marston to abandon the path of crime.

Steam - is the game available there?

Yes, the PC edition of Red Dead Redemption 2 is available on Steam, but also in other stores - Epic Games Store and Rockstar Social Club.

RDR2 on Switch - will it be released?

At the moment neither the game developer nor the publisher has taken an official statement on this issue. Although the game seems to be too technically advanced to work on the Nintendo console, some industry experts still hope for such a version. They point to the successful transfer to the Nintendo platform of such complex titles as Doom, Wolfenstein 2 or Rockstar's LA Noir. Another possibility is to make Red Dead Redemption 2 available to Switch users via streaming service, as will be the case with Assassin's Creed Odyssey. On the release day (26.10.2018), the game was only available on Xbox One and PlayStation.If the game is announced on Nintendo Switch, we will update the information in this guide.

Undead Nighmare mode - will it be available?

At the moment there is no official information about the zombie mode for this title, known from the first part as the Undead Nightmares Challenge. However, given the great interest of game recipients in such mode, it cannot be ruled out that it will be added in one of the planned DLCs.

First-Person-Perspective (FPP) - is it available?

The game has a fully-fledged first person view system. In PlayStation 4 version, the player can change the view "on the fly" using a touchpad integrated with the controller. In addition to TPP and FPS views, the player can also watch the gameplay using a cinematic camera known from Rockstar games.

How long is Red Dead Redemption 2?

According to information provided by one of the game's creators, Dan Houser, Red Dead Redemption 2 should provide you at least 60 hours of fun. However, there is no precise data on what aspects of the game and how many side activities are able to extend the overall gameplay.

Yes, the world map in Red Dead Redemption 2 is very big and diverse. It consists primarily of uninhabited territories - forests, vast wilderness and glades, and even mountain areas where you will get stuck in snow. The map also features some larger cities (including a very big Saint Denis) and many smaller villages.

What is the PEGI rating of Red Dead Redemption 2?

The European raiting agency PEGI has rated the latest Rockstar game as only for adult audiences (rating 18+).

Native Americans - do they appear in the game?

The indigenous peoples of North America don't play a major role in Red Dead Redemption 2's story. According to the creators of the game, the native population of the North American continent will not play a leading role in the story presented in Red Dead Redemption 2. This is fully in line with historical realities - in the year 1899 (time used in the game), practically all Native Americans stayed in special, closed reserves. The percentage of indigenous U.S. citizens was negligible.