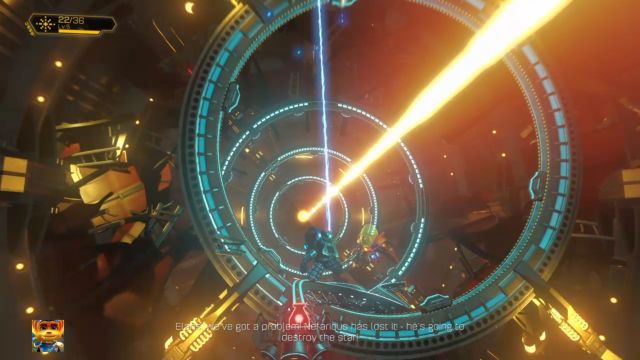 Remember to use the harpoon to get to the other side of the abyss.

Another boss fight, as well as the final moment of the game. The encounter starts with you grinding on a rail - you must straight ahead to safely reach the other side. When the first meeting of rails happen, jump on the one located on the right side, destroy a couple of mines and jump across the abyss with the help of your harpoon. 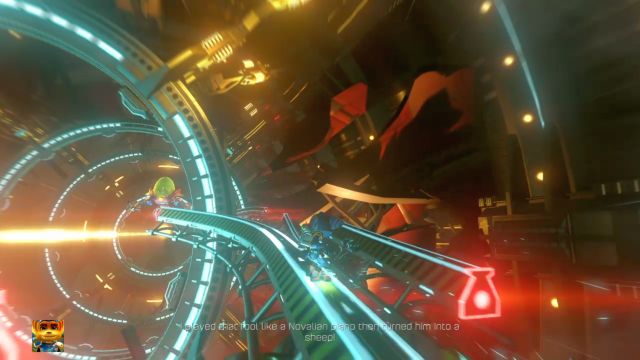 Don't miss the jump on the neighboring rail.

At the next meeting of rails you must jump on the left side. When you reach the abyss use the harpoon again to get to the further part of the rail. Jump thrice to the rails on the right side and get across the abyss with the harpoon again. You must now destroy few more mines, jump across the abyss and change the rail to the one on the right side to reach the ending of the rail and start the real encounter. 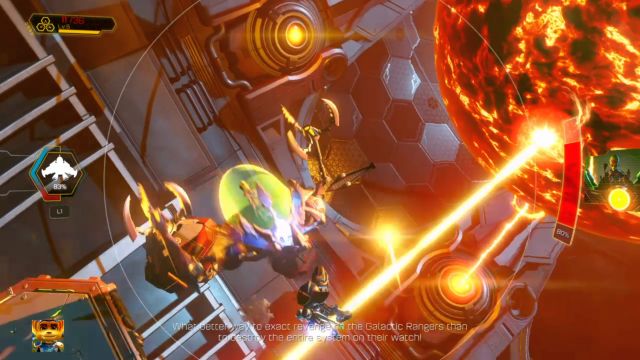 The encounter with Dr. Nefarious is quite an easy, but an exciting one nonetheless.

The encounter with Dr. Nefarious isn't that hard. You must remain in motion all the time (which access to the Jetpack helps a lot with), avoid his attacks and deliver your own. After losing some of his health, the boss will start regenerating by drawing energy from the nearby supernova. There's no special tactic to prevent him from doing so - continue your barrage and after a few seconds the boss will be knocked back from the star, which will stun him for a few seconds.

Some enemies will appear on the battlefield, but at this point in the game they pose zero threat - you won't even notice them in the area. Remember to regularly replenish fuel for the Jetpack and to move around the area all the time - the enemy will regularly destroy the platforms you refueled at, preventing you from using it again. Drop the health bar of the enemy to zero and a long series of cut-scenes will initiate, ending the game.