On this page of the Ratchet & Clank guide, you will find a description of the fight against the fourth boss available in the game - Captain Qwark. 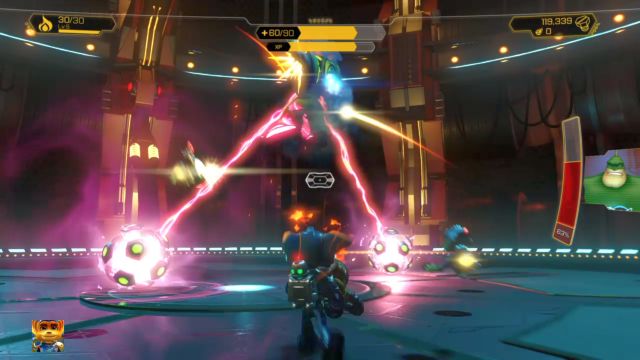 Use Mr. Zurkon and Proton Drum to make the encounter a lot easier.

The encounter with the Captain Quark is quite unique, as the enemy has access to similar gear. The fight can be divided into two parts, like most of the boss battles in the game. During the first one the boss will simply attack - both by using his plasma pistol and throwing grenades that cause shockwaves. The first attack can be dodged by staying in motion, the latter one by jumping at the right moment. 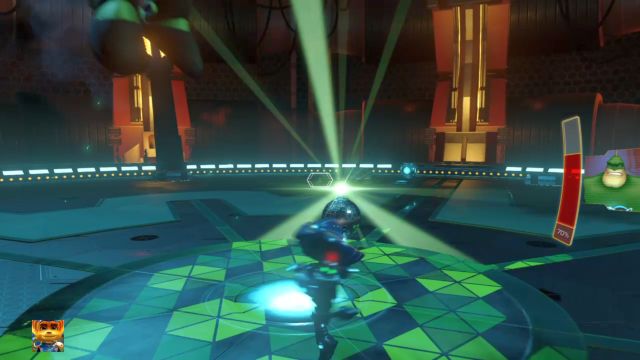 Step on the Groovitron ball to get rid of its effects.

The second phase begins when Captain Quark loses a portion of his health. He will then drop a Groovitron ball on the ground, which will force your character to dance. You won't be able to shoot, only to move around and jump. To break free of the effect you must get to the center of the arena and step on the Groovitron ball, which will return the encounter to "phase one".

You can use Mr. Zurkon and Proton Drum ball(s) to make the encounter a lot easier - both of those weapons will damage the enemy, even during the phase in which you are forced do dance. Captain Quark will repeat the maneuver with the Groovitron a couple of times, but the effects are easy to negate. When the health bar of the boss reaches few percent, the encounter will end and a series of cut-scenes will initiate.