On this page of the guide to Ratchet & Clank, you will find a description of the tasks on the fourth planet - Aridia. Planet Aridia is where you will get valuable gadgets (one of which is used for the racing mini-game). You have to visit this planet before you go to the fifth because it will be necessary to save Skidd Mcmarx.

Planet Aridia is a place in which you acquire two new valuable gadgets (one of which is used for a mini-game). You must visit this planet before you go to the fifth in order - Rilgar - as you must first rescue a character named Skidd McMarx. Below you can find a detailed walkthrough of the location.

Hoverboard - a gadget acquired for completing one of the quests

Hydrodisplacer - a gadget acquired during your journey through the planet 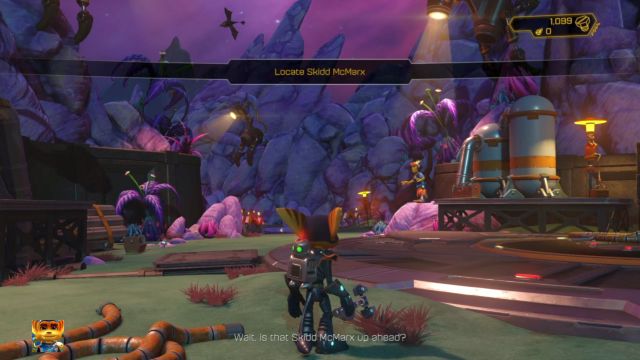 Skidd is located directly in front of the starting location.

After you land on the planet, head straight ahead to talk with Skidd McMarx. During quite a long conversation you will learn, that he needs help in getting back to his ship - and as you've probably guessed, you're the one that must clear the way. This will also end this very short objective.

Help Skidd get to his ship 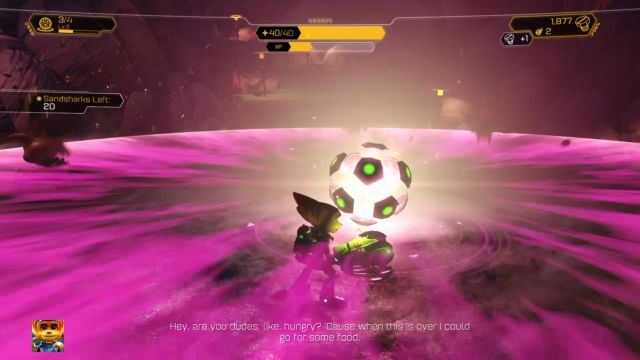 Your task is to eliminate 100 Sandsharks, which can be found in the passageway located behind Skidd (the western part of the map). Those enemies are trivial to defeat (you have to hit them once with any weapon) and the best method to deal with them is to use the Proton Drum and Pyrocitor. 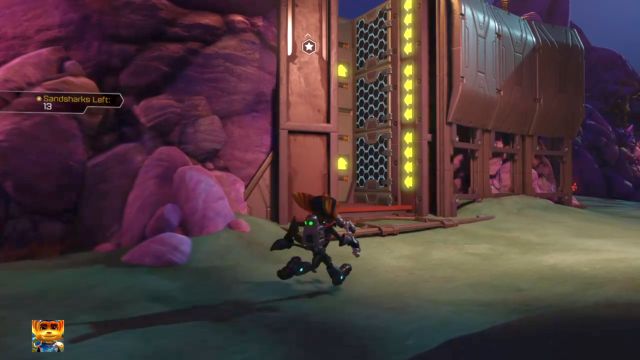 The last group of Sandsharks is located on an elevation.

Get rid of all of the enemies located on the ground floor, and when there's only about a dozen of them remaining you must get on top of an elevation by bouncing off the walls. If you can't find the exact location, a marked will appear on the screen after a short while. Get on top of the said elevation and eliminate the remaining enemies, which will initiate another cut-scene, and you will be given a new gadget - Hoverboard. This will allow you to take part in hoverboard racing events. The first such event can be found on the next planet (Rilgar). 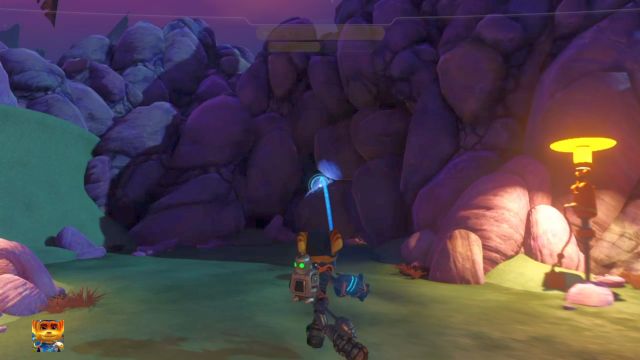 A wall blocking the secret passage to the Gold Bolt.

Before you continue your journey, you will be able to acquire another Gold Bolt in a place where Sandsharks were previously lurking. Get back to the place where you've spoken with Skidd for the first time and head towards the area where mentioned enemies where. Jump through the swap and head straight ahead, sticking to the wall on the right side.

About halfway through the mountains you will see a small room with the treasure you are looking for, although you will not be able to reach it from here. Continue your journey along the wall on the right side. Jump through another swamp, head to the right and jump through another trap. Now you turn your camera to the right (as shown on the above screenshot) and throw a grenade at the wall. It will open up the passageway to a secret room with a Gold Bolt and a number of boxes to destroy. 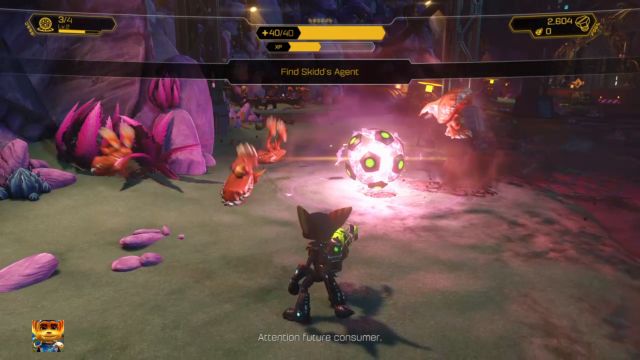 Get back to the ship and replenish ammo and health at the store - remember to upgrade your weapons as well, as you've probably collected a few Raritarium crystals. Go to the passage located behind the store. Another encounter with Sandsharks await you here, accompanied by a new enemy. This foe shoots walls of fire that travel towards you - to avoid getting hit by it you can either jump over it, or dodge to the side. 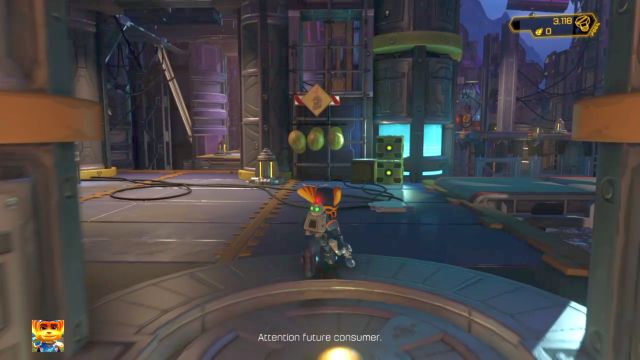 Ignore the passage in front of you.

There's nothing important to do or collect here, so just head straight ahead until you reach an elevator. When you're at the top of it, ignore the passageway in front of you (but remember about it, as you will be back here in a moment) and turn to the right. You must venture through a number of narrow, moving platforms, where a few of the flamethrower-wielding enemies will try to knock you down. Continue your journey until you reach another elevator, this time heading downwards. 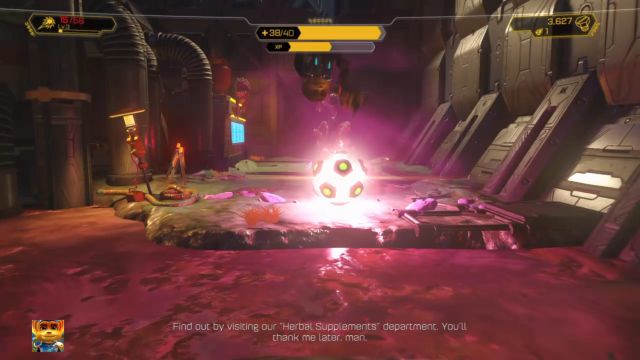 Try not to fall into the swamp.

While moving around the area watch your steps, as there's a swamp here. Jump over it, eliminate the Sandsharks and the enemy on an elevation and climb up using the wall with the yellow up-arrows on it. There's a few enemies, a large amount of boxes and a holocard to pick up on the other side. Collect all of it and climb up the yellow wall. 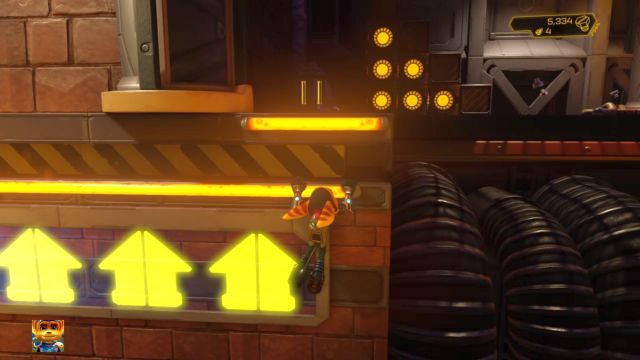 A climbing section awaits you here.

There's an enemy equipped with the flamethrower on the other side of the pipes - shoot at him when he becomes visible and jump to the side to avoid getting hit. When you've defeated him go through the pipes and get on top of the elevation by climbing the yellow handrails on the wall with yellow up-arrows. Continue along the handrails until you're back on solid ground. 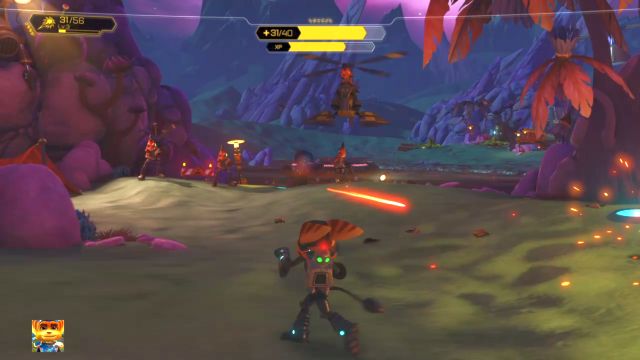 Clear the area to save Skidd's agent.

You will arrive back at the surface, where Skidd's agent is located. Eliminate all the enemies in the area, collect everything they dropped and approach the agent to initiate a cut-scene. When it's over, get back to the passageway you've ignored earlier - don't pay any attention to the magnetic ramp in the area, as you require Magneboots to get there.

Locate the gadget inside the McMarx Sports Shack 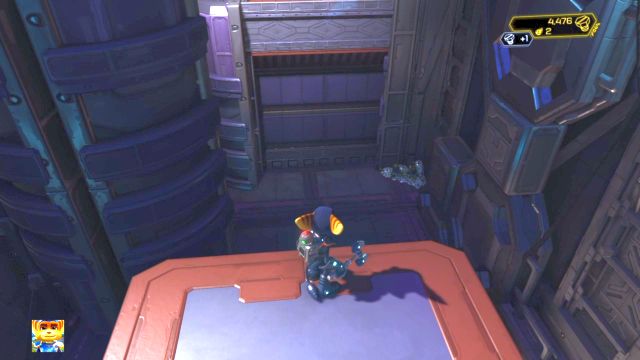 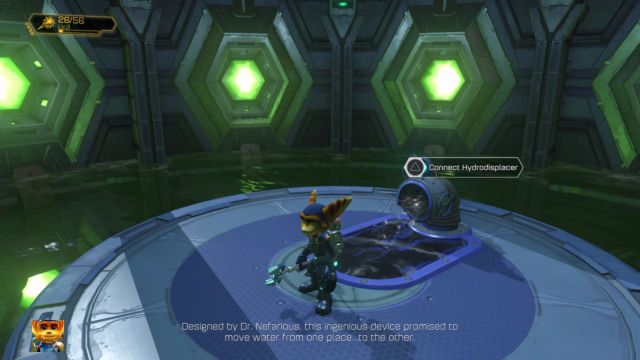 Another gadget to collect. 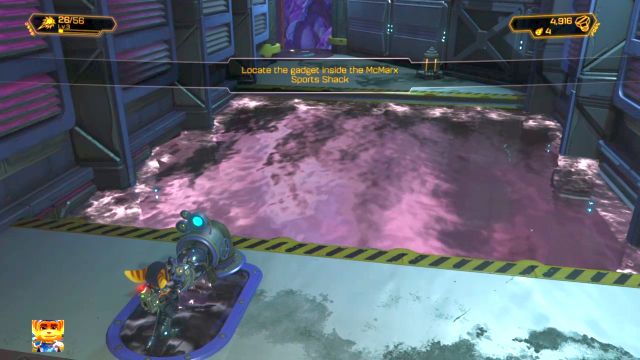 Hydrodisplacer will be used a number of Times here, as well as on other planets.

Interact with the mechanism with the Omniwrech, but before you go to the newly opened passageway, jump into the water and dive. There's another Gold Bolt located there. Collect it, resurface and go through the gate you've just opened. Use the Hydrodisplacer again to fill the empty space with water. Go straight ahead and use the elevator to get to the lower floor, until you reach a familiar place.

All of the objectives on this planet are now complete. Head back to the ship and set your destination to planet Rilgar.