On this page of the guide to Ratchet & Clank, you will find a description of the tasks on the second planet - Novalis. During this visit, you will try to repair the ship, look for treasure, and defense the planet.

Novalis is the second planet you will visit. During your stay here you will try to repair your ship, look for a treasure and will get involved in the defense of the planet. Below you can find a detailed walkthrough of the location.

Pyrocitor - a weapon for purchase in the store. It costs 2,000 bolts.

Proton Drum - a weapon for purchase in the store. It costs 4,000 bolts. 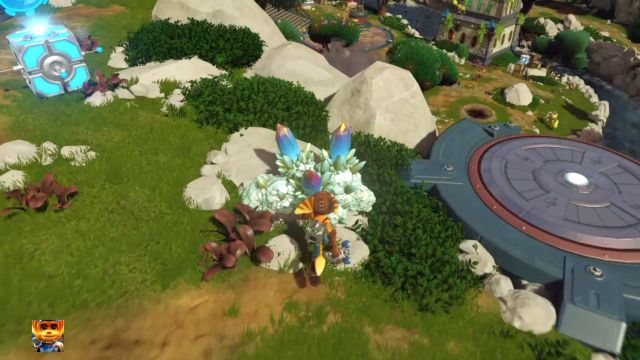 After a long series of cut-scenes you will end up on a new planet - Novalis. The ship the duo was traveling with was damaged during the journey. Your main task here is to find someone to repair it while you fend of the enemy invasion on the planet. Additionally, there's a side quest here requiring you to clear a cave, which will allow you to gain a lot of bolts. 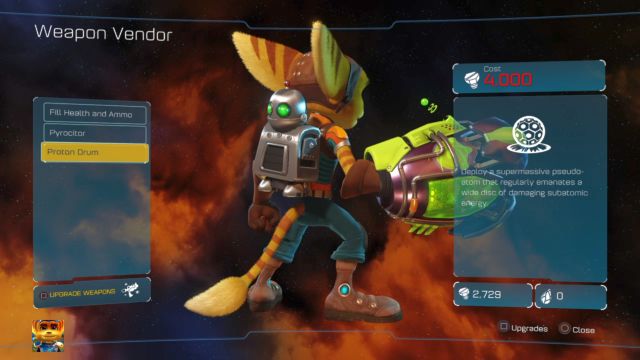 Two new weapons will appear in the store.

Head straight ahead of the starting location and hit the crystals located to the left of the round platform. This way you will acquire Raritarium, used to upgrade weapons at the store. You can learn about the whole mechanic by entering the said store, which can be found nearby. You will be introduced to the system of weapon upgrading step by step, during which you will enhance a fictional weapon, given to you for the purpose of the tutorial. Don't worry - you won't use your own supply of Raritarium during this section. 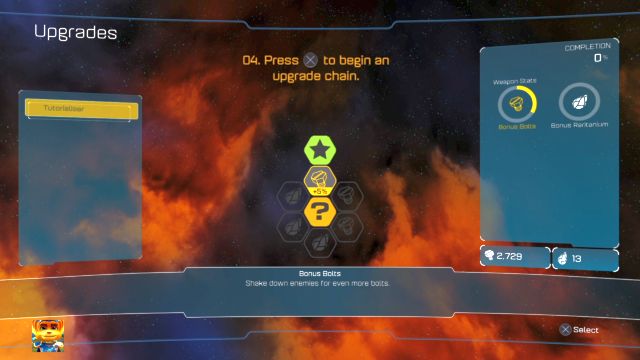 The game will introduce you to the weapon upgrading system.

Afterwards, upgrade one of your weapons (Combustor preferably), unlocking the things you need the most. If you manage to unlock all the upgrades surrounding a yellow question mark, the weapon will be given a special, unique characteristic. You should always aim to unlock those bonuses. More of them will appear as you level up your weapon - more on the topic can be found in the "Weapon upgrading" chapter of this guide.

There are two new weapons available in the store - Pyrocitor and Proton Drum. The first one is basically a flamethrower, effective at short range, when dealing with swarms of monsters. The second one allows you to shoot a ball that emits shockwaves, damaging all the enemies around it. More on them can be found in the chapter about weapons.

Find someone to help you repair your ship 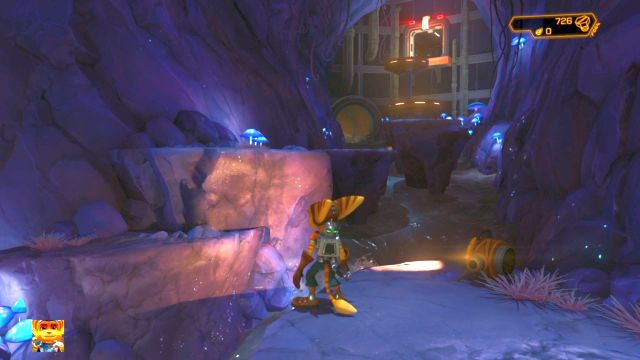 Try not to fall into the water. 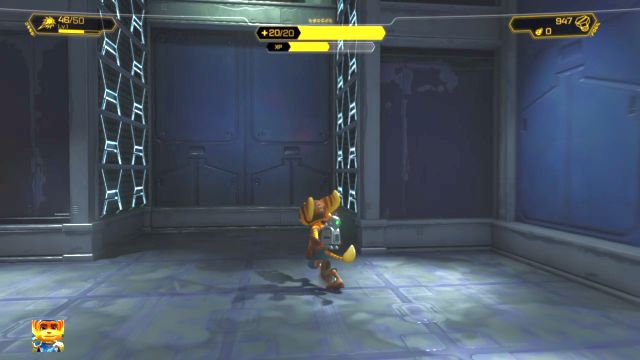 Bounce off the walls to reach the top.

A new type of enemy will appear hear - a robot resembling a bee. If you've purchased any of the new weapons in the store use them against those foes - both the Pyrocitor, as well as the Proton Drum are extremely effective against them. Approach a narrowing resembling a chimney - you must climb upwards by bouncing off the walls covered with "crosses". After you've reached the top, head towards the next room. 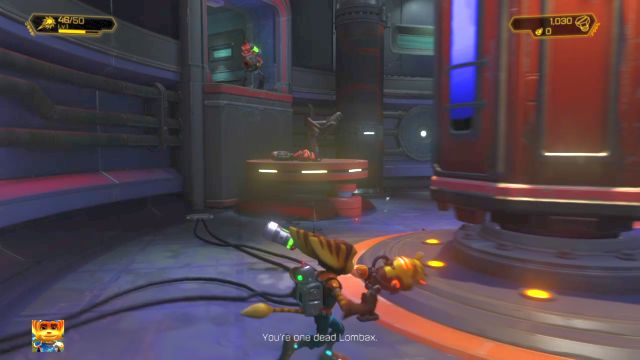 Try not to fall into the hole in the floor while fighting the enemy.

A new group of enemies will await you here, but you must also watch out for the hole in the wall dividing the room. If you fall into it, you will end up at the entrance to the cave. Get rid of the enemies and get to the passageway by using the moving platform. 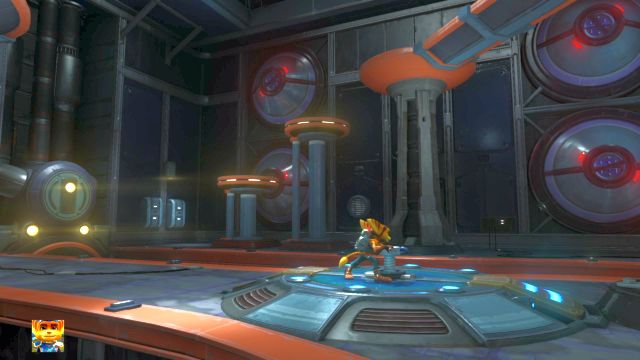 Use the mechanism to unlock the passageway.

Clear the next room off the enemies and approach the highlighted mechanism. Interact with it all the way to the end, which will set the platforms at the other side of the room in motion. Climb up using them and head towards the next room, eliminating the enemies along the way. A series of cut-scenes will kick in. After they're over, destroy all the boxes in the area and jump into the canal to get back to the starting location.

Search the caves for hidden treasure 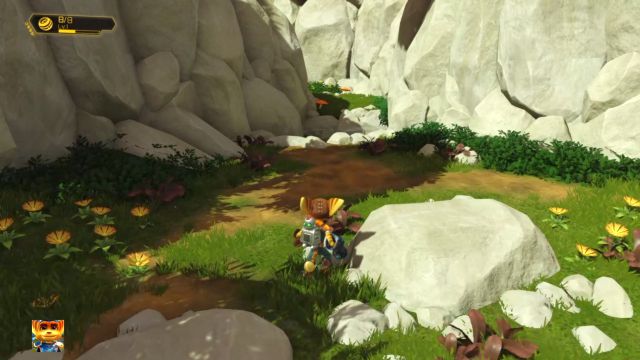 A passageway leading to the secret cave.

You must now get rid of the enemies attacking the planet, but before you do that head to the narrow passageway located behind the ship. Jump into the water and swim to the other side, until you reach a gate with the Omniwrench mechanism in front of it. Interact with it to open the entrance to the secret cave. 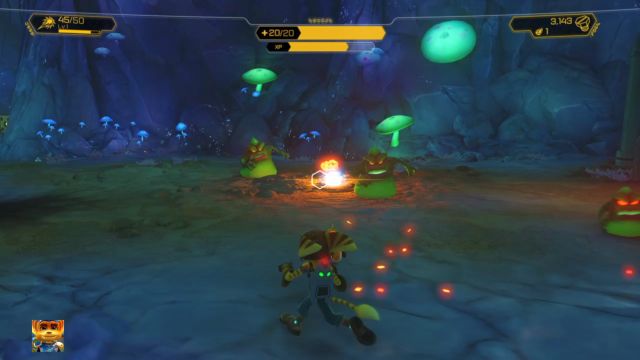 A new type of enemies.

Clear the room off enemies and boxes, and then head straight ahead, until you reach the next water reservoir. Jump into and dive underwater (by pressing and holding the "square" button). Swim through the pipe to the next room. Resurface to catch a breath and dive again to destroy the boxes underwater. You can't attack them directly, which is why you must get close to the glowing boxes, which will activate the bombs. Get away from them to not take any damage and wait for them to explode. Collect the bolts and continue your journey. 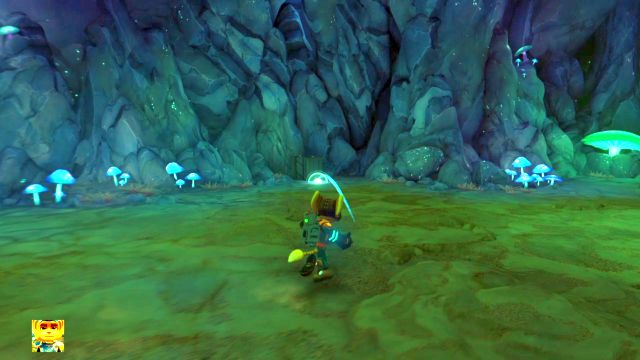 A wall that can be destroyed with a grenade.

Jump from the reservoir to the ground, where another group of green enemies awaits you. After you've eliminated them, don't go further into the cave. Instead, destroy the wall shown on the above screenshot with a grenade to reveal a secret room. Inside you will find a huge number of boxes and a holocard. Collect them all and then head further into the cave, until you reach another water reservoir. Dive into the water and swim to the other side, where an exit can be found. 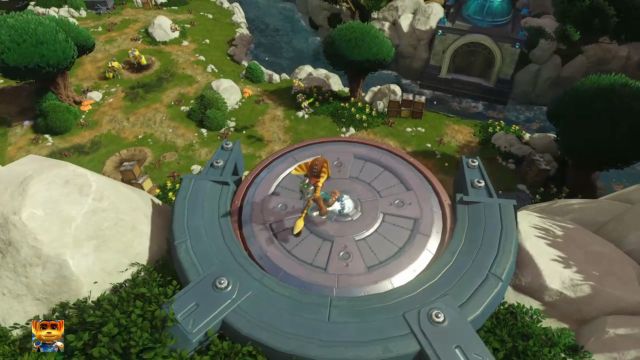 Use the platform to get to the lower ground.

You will yet again end up at the starting point. Use the bolts you've collected to purchase new weapons and restock on ammo, and Raritarium to upgrade your tools. Your final objective on this planet will be to eradicate all the enemies attacking it. Jump to the lower ground (or use the nearby round platform to reach it). 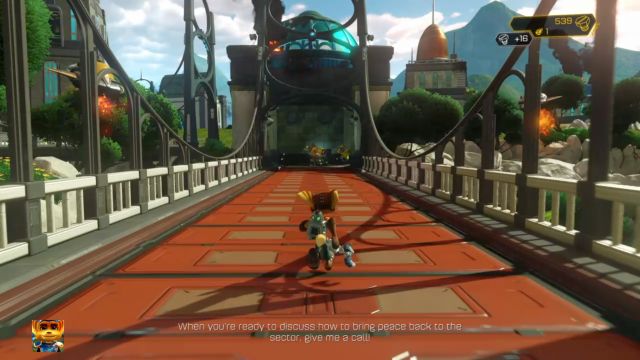 Enemies can blast holes in the bridge.

An encounter with a rather large group of enemies awaits you here. Eliminate them one by one and slowly move forward (to the north while looking at the map), as there's nothing else to do here at the moment. Climb up the stairs and approach the bridge. Note that the enemies can blast holes in it with their attacks - you won't be killed or even damaged by falling into it, but you will be forced to get here again. 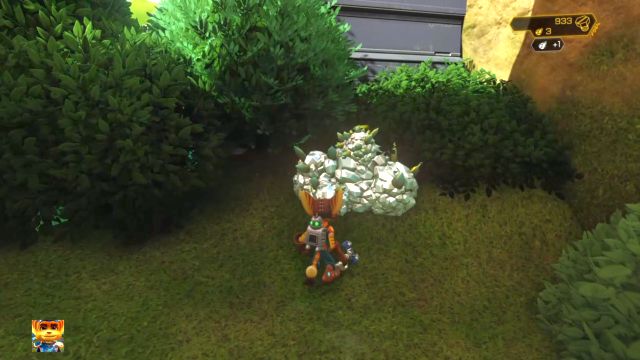 Raritarium field hidden in the brushes.

After crossing the bridge a cut-scene will initiate. You must now defeat all the enemies attacking the spaceship of Mayor Buckwash. Before you do so, however, turn left from the stairs and then turn left again. Enter the nearby brushes, where a Raritarium field can be found. Collect the crystal and eliminate all the enemies in the area, after which another cut-scene will initiate. 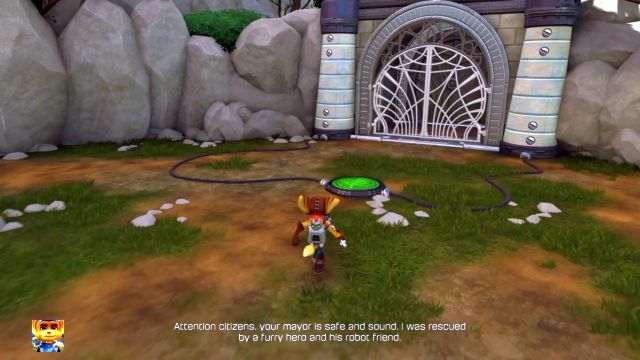 A button used to open the gate.

After the cut-scene ends, activate the green button located near the Mayor's ship to open the gate. Head back to the ship, where another cut-scene will initiate. Your ship is now fully functional again. You've done everything on this planet - head inside the ship and select planet Kerwan as your destination.