This page of the Ratchet & Clank Rift Apart guide has the second part of the walkthrough for your second visit to Sargasso. The following guide explains, among other things, how to get to Trudi, how to use fireballs to destroy the core of Nefarious' ship, and how to pick up and throw bombs.

Take down the Nefarious ships 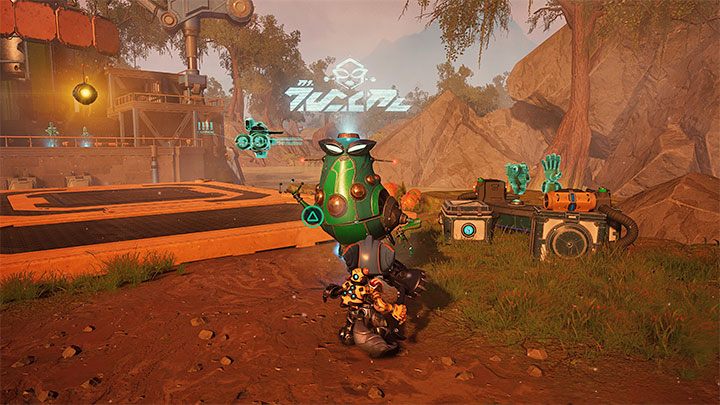 You start in the place where you have passed 3 logic puzzles as Kit. These puzzles set Seekerpede free so that it could join the battle.

You are in the southwestern part of the map - Ms. Zurkon has set up her shop nearby. She doesn't have any new weapons this time, but you can, for example, spend Raritanium to unlock new upgrades. 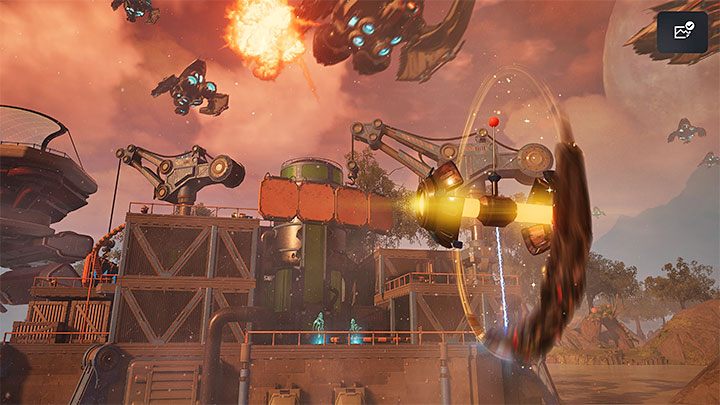 Next to Mrs. Zurkon, you will notice an interactive grappling point - use the Hurlshot to catapult Rivet toward the nearby larger platform.

You can start using rails in the new location. While using them, remember to destroy passing objects. You will also have to run on walls in several places. 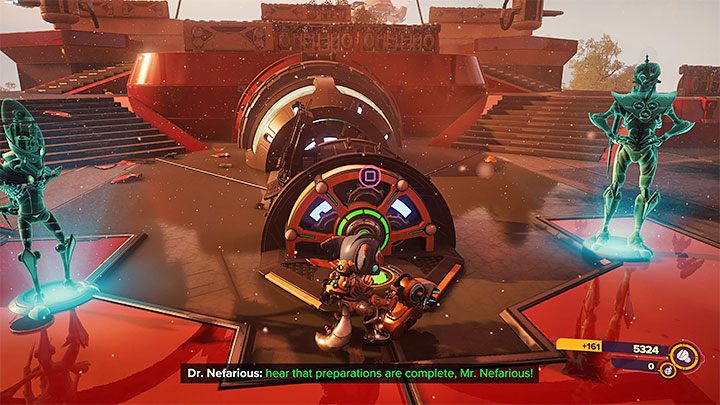 Once you reach one of the upper levels, attack Nefarious' machines. Depending on their placement, use weapons for short/medium or long-range attacks.

After the battles, locate the crank in the image above and interact with it. Trudi will appear - jump on her back to start flying.

Destroy the Nefarious ships with Trudi 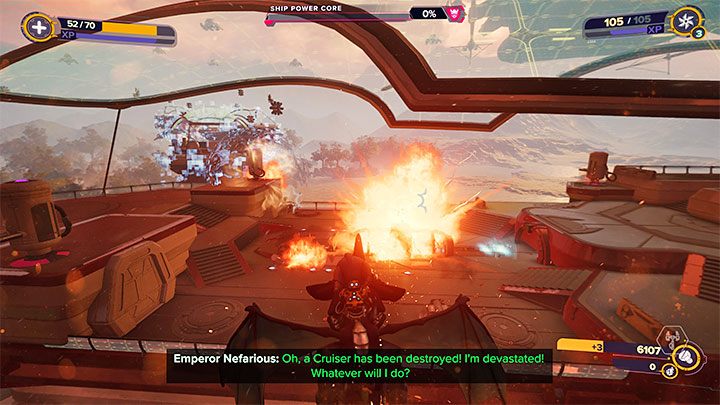 Look for Nefarious ships, specifically those that shoot large beams at Sargasso.

Your job is to destroy the cores of ships. You can do this by flying up to them - hold L2 to slow down and shoot fireballs (R2) at the cores. A core's energy bar will appear at the top of the screen so you can check the effectiveness of your attacks. 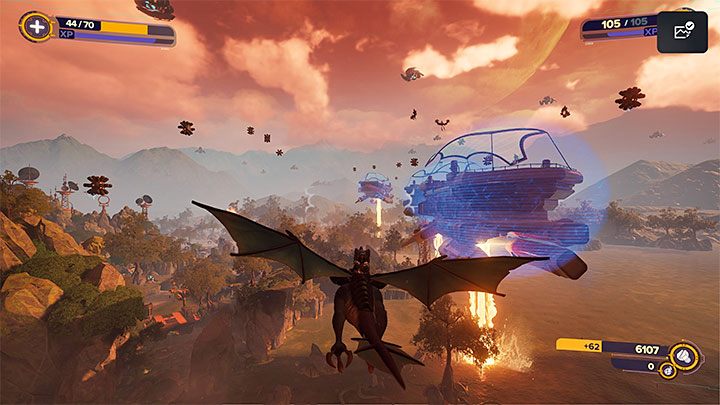 If necessary, you can attack Nefarious troops while dealing with the cores.

After destroying the 2 airships, the remaining ships will be surrounded by energy fields. This means you will have to change your tactics.

Use bombs to destroy the Nefarious ships 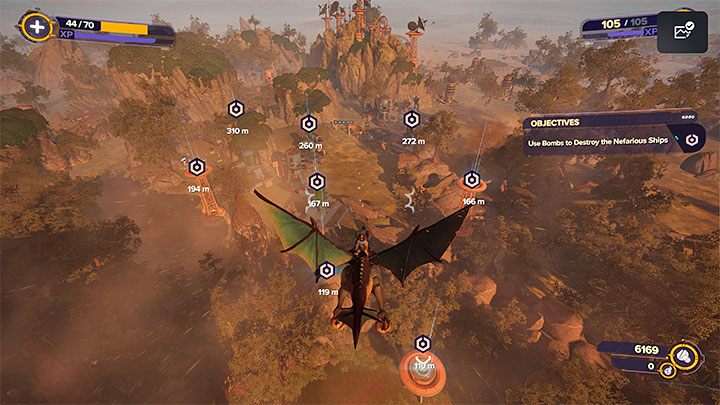 After talking with the Morts, the game will mark the places where you can pick up bombs. You can choose any bombs from the available ones - you won't use them all anyway. 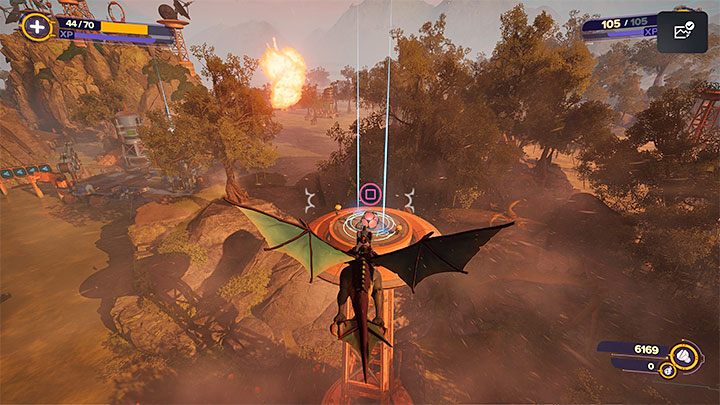 To grab a bomb, you must fly up to it and press Square. Trudi can only carry one bomb at a time. 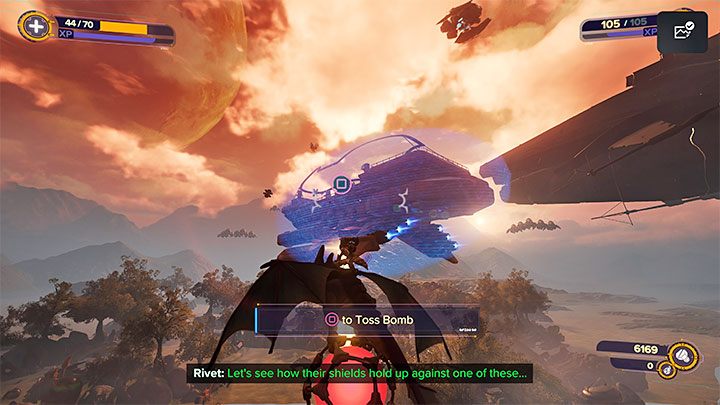 After picking up a bomb, start flying towards any enemy ship with an active force field. Make sure the enemy unit is exactly on your flight path and press Square again to throw the bomb. The ship will be destroyed. 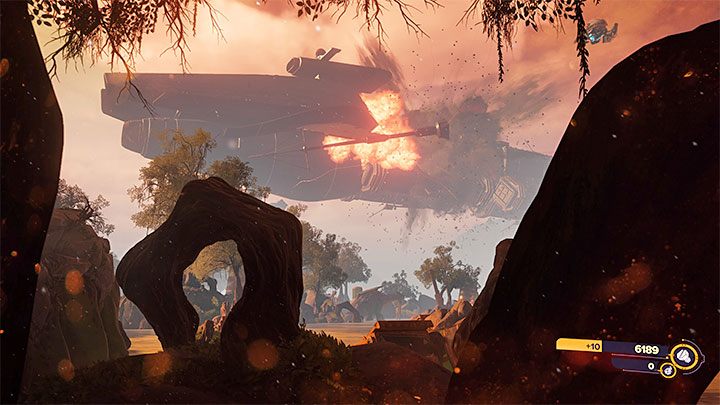 Do the same with the second bomb to destroy the second ship. Watch a cut-scene from destroying Nefarious' main ship and winning the battle.

Watch another cut-scene with Emperor Nefarious, although this encounter does not contain any interactive scenes. 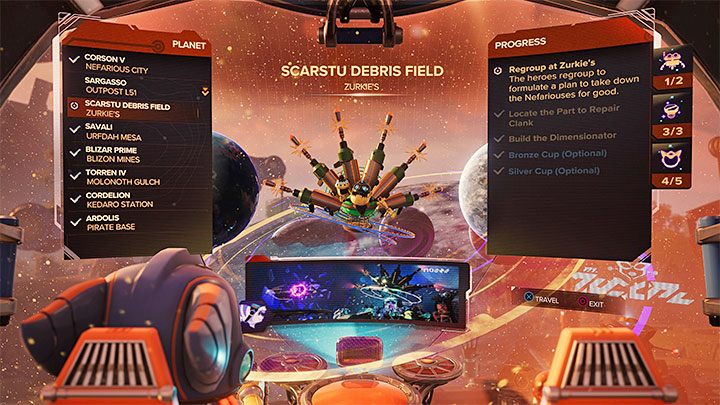 You can use the spaceship to leave Sargasso. To continue the main story, you have to return to the Scarstu Debris Field.

A new cut-scene will start - you will automatically switch to Ratchet, who will return to the Savali planet. You can find the description of the second visit to Savala on the next page of the walkthrough.