This page of the Ratchet & Clank Rift Apart guide covers the third part of the Ardolis walkthrough. This part of the walkthrough focuses on the Pirate Trials that you must complete on your way to Captain Quantum. You will learn how to pass all 3 tests. 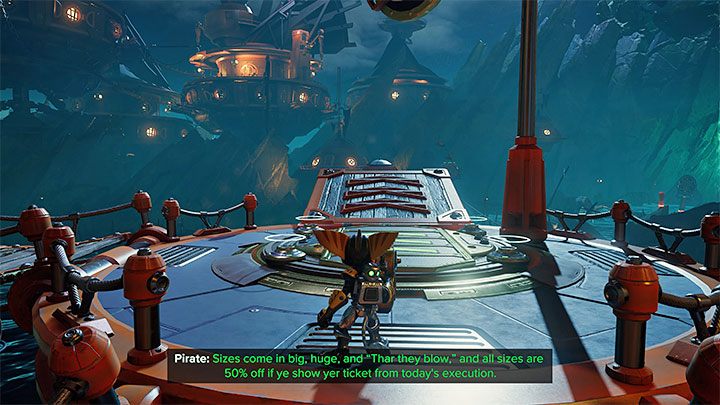 You must start on the circular platform where you rescued Pierre Le Fer - we discussed this on the first page of the Ardolis walkthrough.

Check out the western pathway. Find a pressure plate with arrows shown in the picture. Gain enough momentum with the Hoverboots and run on the plate - Ratchet will be catapulted to the island far to the west. 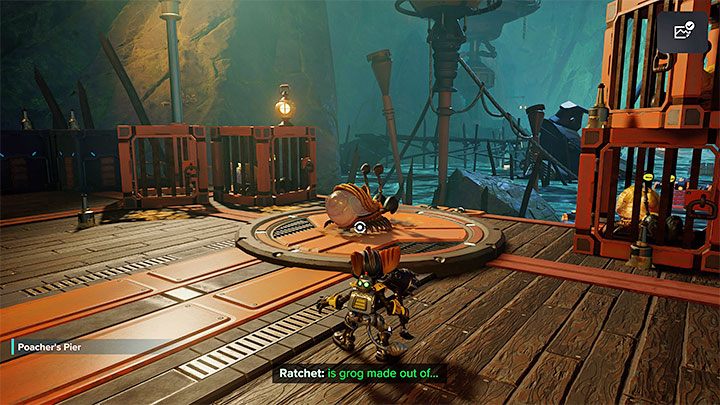 Keep jumping to the next islands and avoid contact with the water - there are carnivorous fish swimming around. Reach Poacher's Pier and find a Speetle. With its help, you will be able to move in the water. 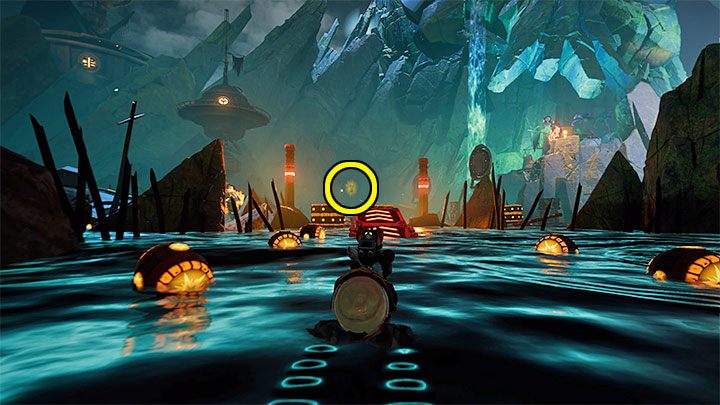 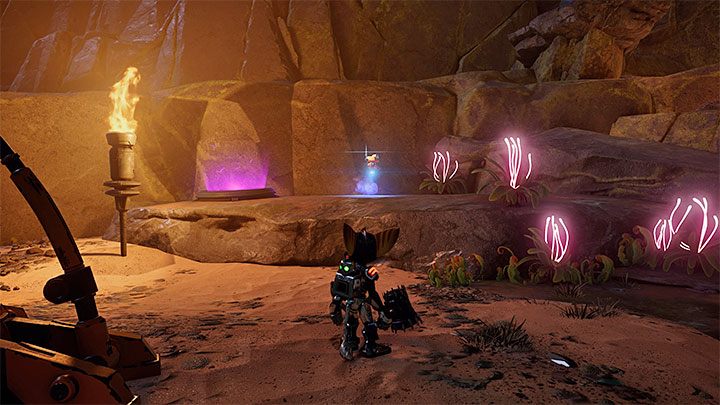 Before you take care of the current main objective, use the Speetle to obtain two collectibles in this area. Getting to them is, of course, entirely optional: 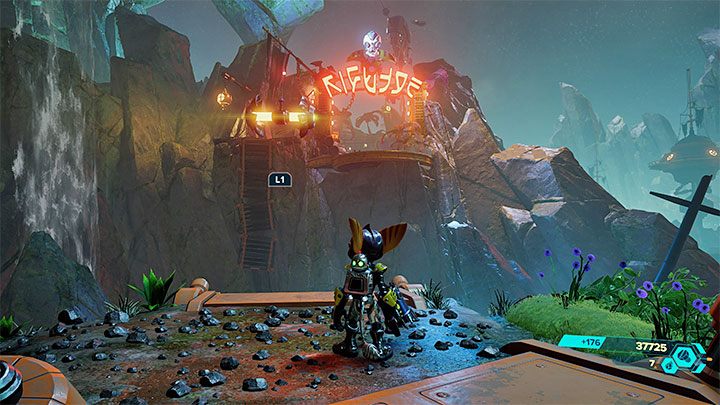 To get to Skull Mountain, reach the tiny island in the northwestern part of the reservoir marked by the game. Get off the Speetle. In the place from the picture, you can grab the grappling point and launch yourself to reach the place of solving the Pirate Trials. 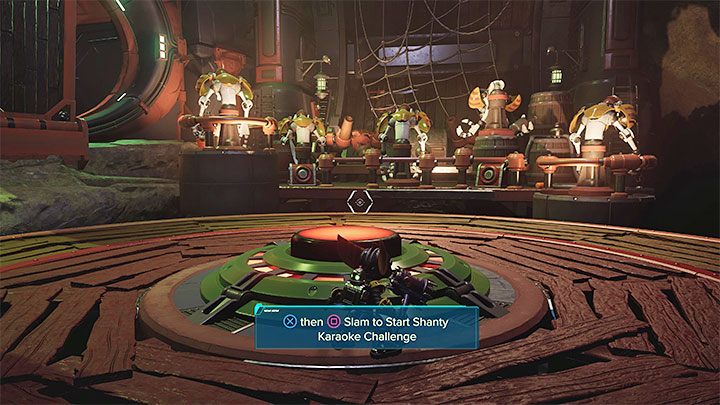 The Karaoke Challenge requires you to perform Shanty perfectly. You must start by hitting the big red button - jump up (X) and use your melee weapon (Square) when you are in the air. 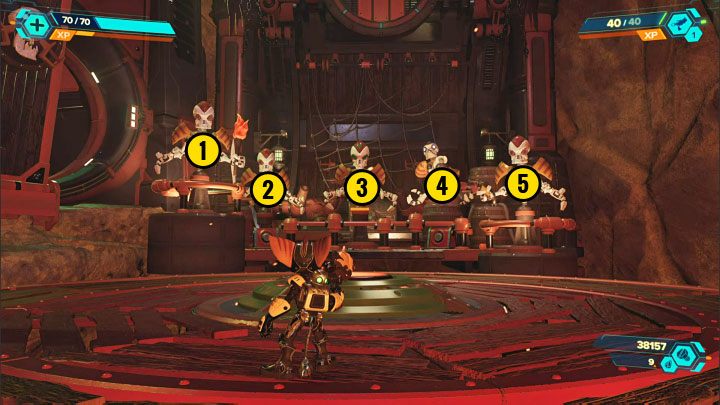 Your task is to shoot the singing pirates with (any) firearms in the same order they were singing the song. Always wait until the end of the song so you won't have problems replaying it. Here's the solution to the puzzle:

By correctly completing all three parts of the puzzle, the passage on the left will be unlocked. 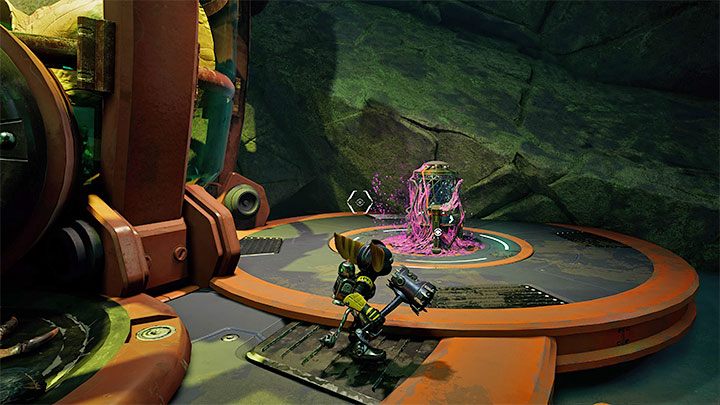 Use the elevator to reach the place where the fight with Grunthor was supposed to take place. This trial doesn't require you to do any mandatory actions.

You may, however, complete an optional sequence for Glitch - repair an infected console. You will be rewarded with a Gold Bolt.

We described Glitch's sequence in more detail on our page about secrets and collectibles in Ardolis. 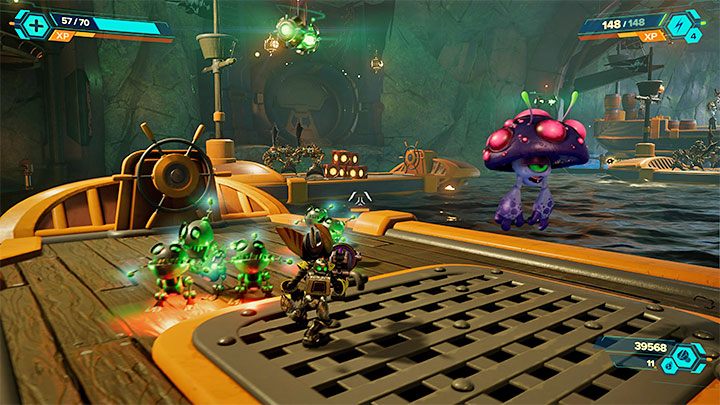 A linear path will lead you to a cavern where the final third trial will take place - you will have to fight pirates.

First, you must face "regular" pirates. Try to use short and medium-range weapons, and remember to hit explosive red barrels. You can either jump to the next ship, reach it using the hooks, or swim to it - you won't be eaten by a sea monster. 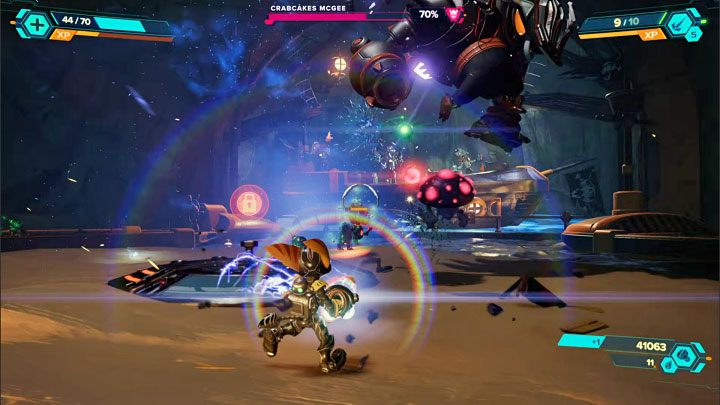 After you eliminate enough regular enemies, an island will emerge from the water. Also, a boss - Crabcakes McGee - will appear.

The boss won't stay on the middle island all the time - it can make long jumps. As in the case of previous battles with large mechanical opponents, move away from the areas where the opponent intends to land. You can help yourself with Phantom Dash, Hoverboot or by grabbing nearby hooks. 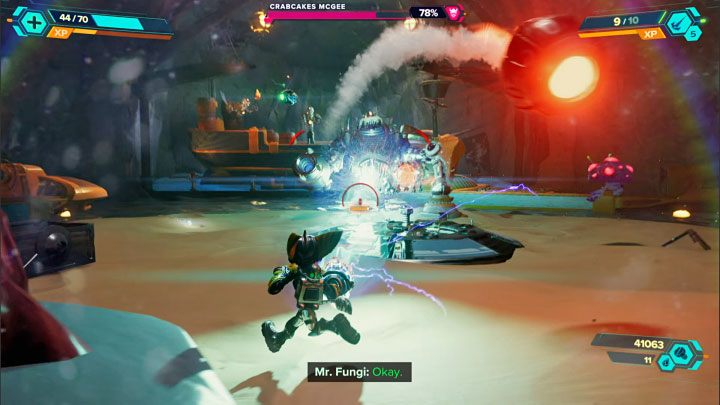 Crabcakes McGee is equipped with a grenade launcher. Try to avoid the projectiles and mines in flight and quickly move away from areas where they will hit the ground. 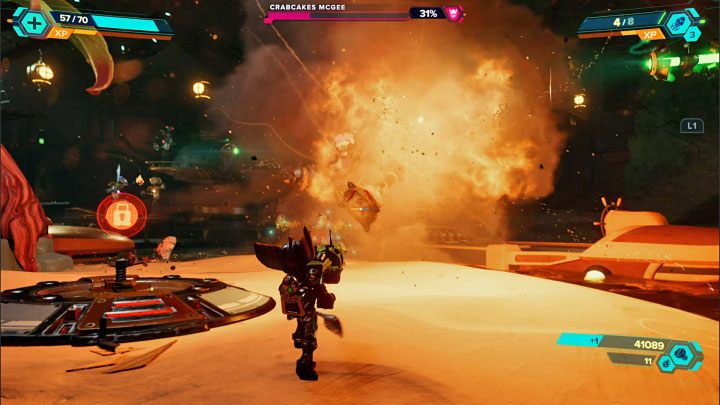 Run around the central island. You can also return to the area with ships from time to time.

You will find ammo and health crates on the island - smash them when needed. 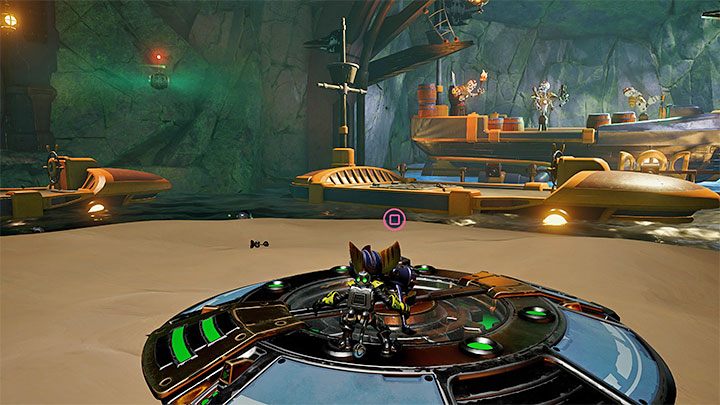 After winning the boss battle, approach the central mechanism with a crank. Using it will unlock one of the side passages, which you can reach by grabbing onto the top hook. This way you will get a piece of armor (collectible). 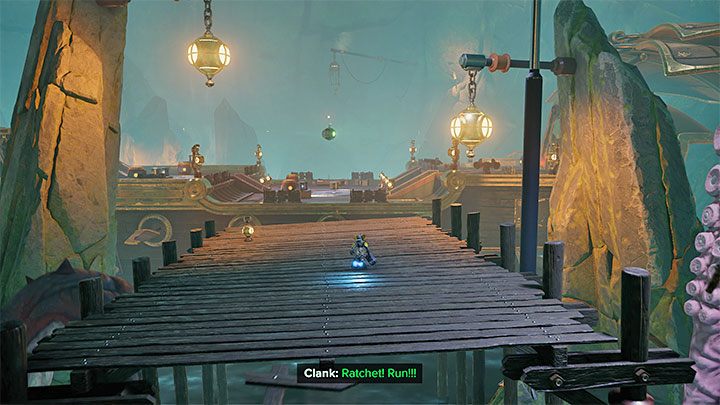 Set off southwest and run across the pier before it completely collapses. You will encounter Captain Quantum - the pirate trials are complete.