On this page of the Ratchet & Clank Rift Apart game guide, you'll find a walkthrough for returning to the Scarstu Debris Field location, which happens after capturing Phase Quartz and creating a Dimensionator. You will learn about the circumstances of Ratchet and Rivet's encounter, as well as how to defeat the boss Doctor Nefarious again.

Requirements for returning to the Gastropub 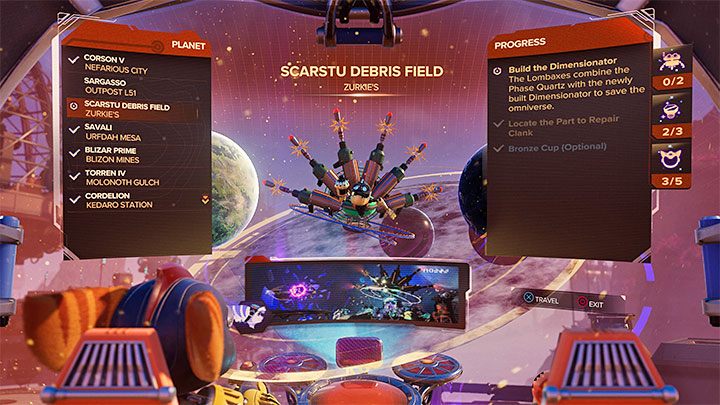 You have to return to the Scarstu Debris Field as part of the main storyline after:

Both of these planets are described in detail in the previous chapters of the guide. After highlighting the Scarstu Debris Field in the list of locations, you should see the main mission objective about the heroes meeting in the Gastropub. 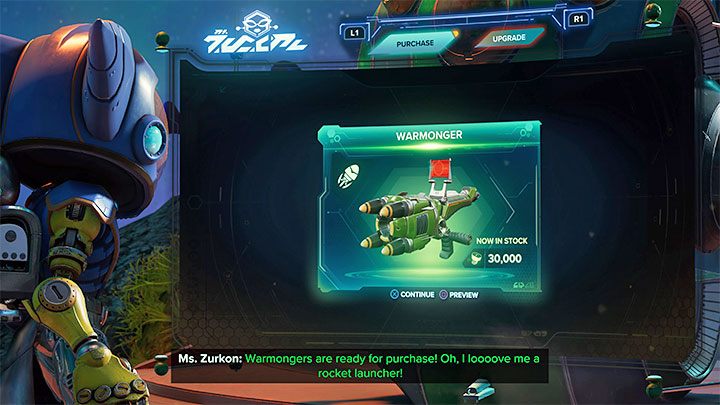 After landing on the platform in the Scarstu Debris Field, you must head towards the entrance to the Gastropub.

Before you enter the location, it's worth visiting Ms. Zurkon, as a Warmonger launcher appeared in her offer for 30000 bolts. The weapon is perfect for attacking strong enemies for obvious reasons. If you have enough bolts in stock, purchase it right away to use it in the upcoming boss fight. Otherwise, you can easily collect bolts with the new optional arena battles. 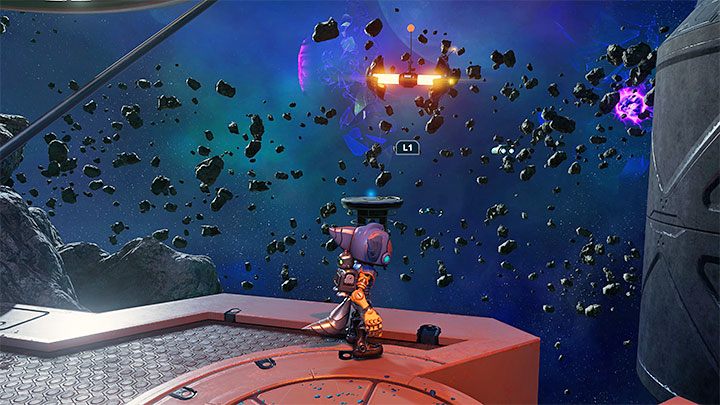 It is also worth noting that by obtaining the Hurlshot on the planet Torren IV, you can now reach Spybot located to the right of the Gastropub entrance. In the place from the picture, you can grab the grappling and, by holding down L1, pull yourself to a distant platform with a secret. 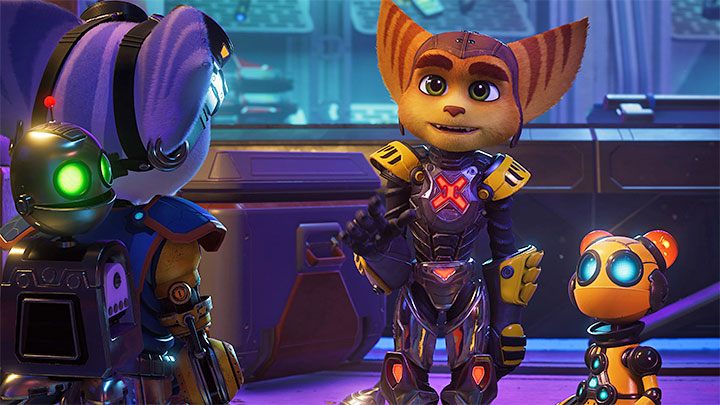 Entering Zurkie's will lead to a cut-scene of Ratchet and Rivet (and Clank and Kit) meeting for the first time. 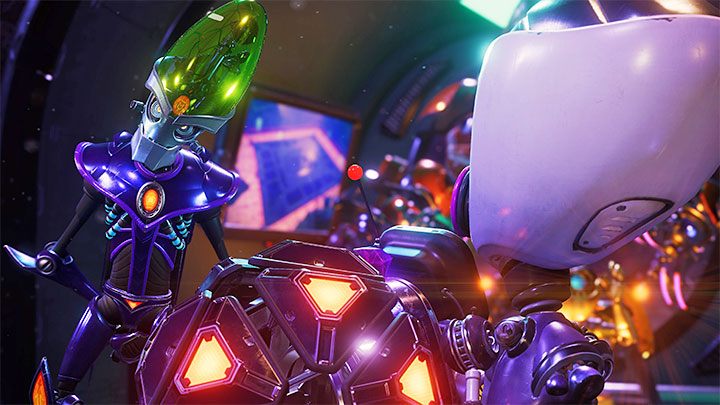 The heroes' meeting is interrupted by the appearance of Dr. Nefarious and you will have to fight a four-part boss battle. The next stages of the fight with Doctor Nefarious are described in detail below.

Dr. Nefarious - the first stage of the fight 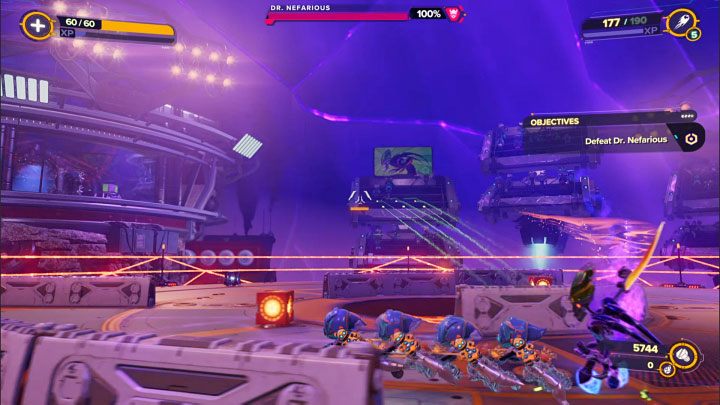 During the first phase (out of four), your task will be to get his health bar down from 100 down to 80%. You are free to choose the weapon you want to use to attack the boss. You can use medium and long range weapons, as well as melee weapons whenever the boss gets close.

Watch out for the boss's melee attacks. There is little time to react appropriately. You must use Phantom Dash to avoid being hit. 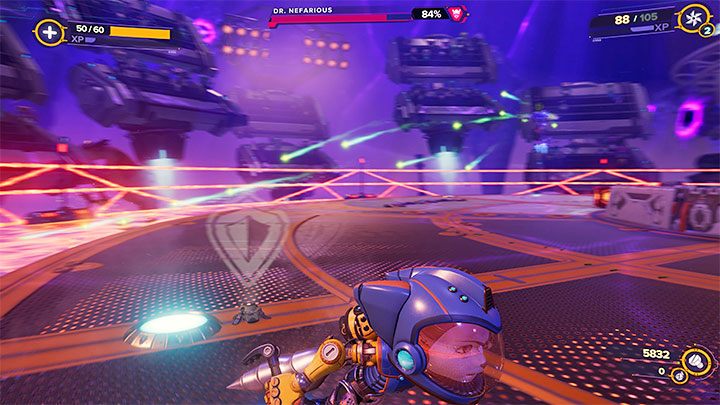 Nefarious will also shoot at you. Here, things are pretty simple - you can run sideways or use Hoverboots and Phantom Dash if things get more dangerous. 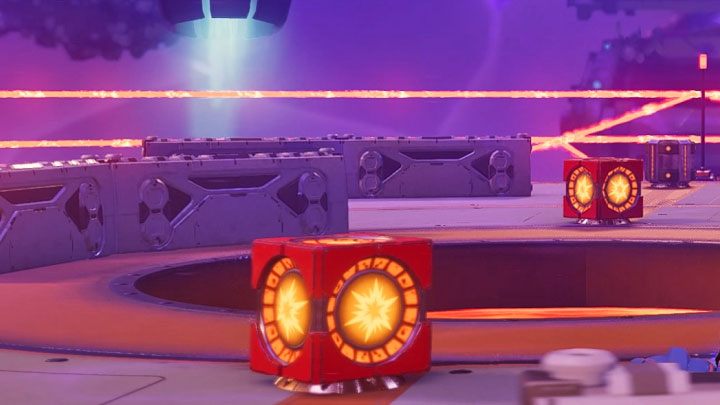 During battles, watch out for explosive crates that the boss can detonate with his attacks. You can, of course, try to use them against the boss when he gets close to them.

Instead, look for regular boxes so that you can replenish your ammunition and restore health when needed. 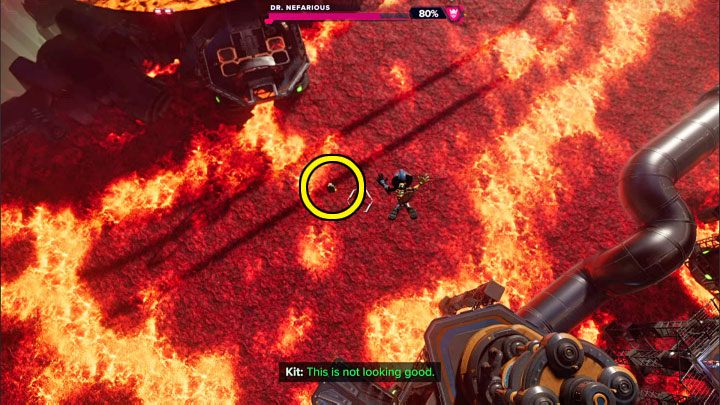 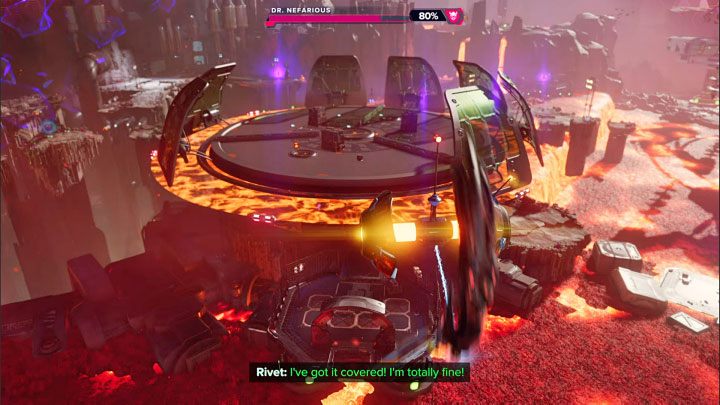 The first phase of the battle against Dr. Nefarious will conclude with a rail ride scene. The most important is its final part - you have to catch on the fly the interactive grapple (we've marked it on the screenshot 1), and additionally catapult your character (hold L1) to the place where you enter the second phase of the fight. 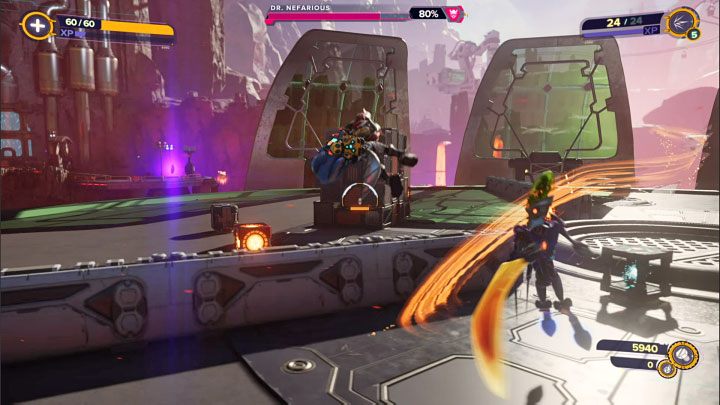 In the second phase of the battle, you have to drop Dr. Nefarious' health from 80 to 50 percent.

The boss in this phase of the duel will keep his selected attacks, and again you must pay most attention to his melee attacks. As before, use Phantom Dash to avoid taking damage. 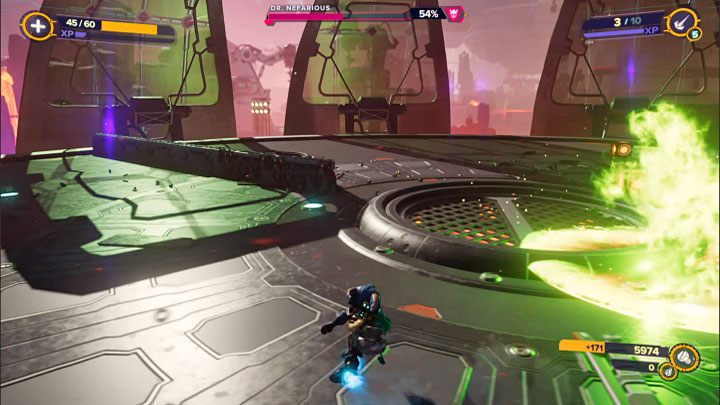 Nefarious' new attack will include bombarding the arena with green missiles. Fortunately, they do not land on the entire arena, but only on a selected area. When you see where the missiles are headed, quickly go in the opposite direction, using the Hoverboots and Phantom Dash to get out of their range. 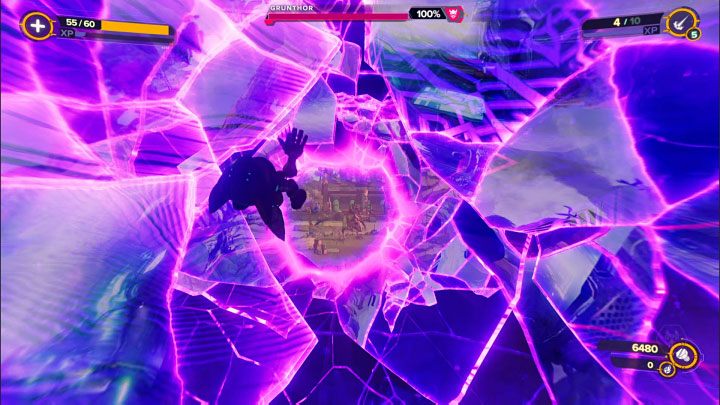 Keep fighting until Nefarious has half his health bar left. The boss will move the fight to another dimension (to the planet Sargasso) where the third phase of the battle described below will begin. 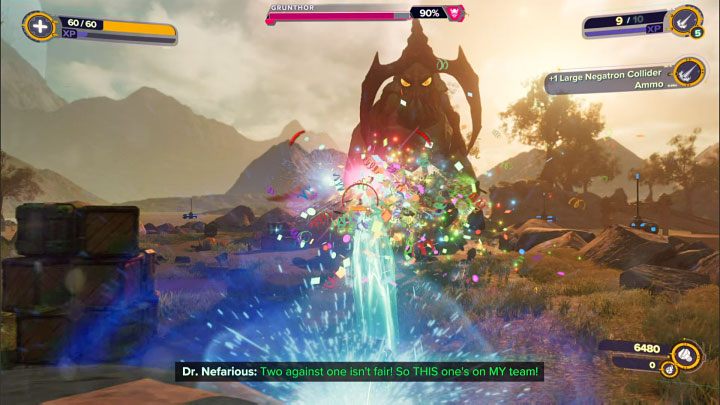 After advancing to the third phase of the battle, you must first deal with Grunthor, a mini-boss "summoned" by Nefarious. Here's a quick reminder of how to fight Grunthors: 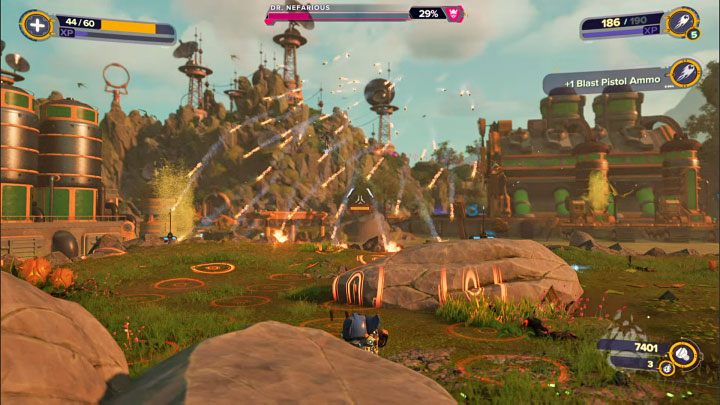 Only after defeating Grunthor you can continue fighting Dr. Nefarious and in the third phase of the battle you must deplete the boss's health bar from 50 to 25%.

Dr. Nefarious' only new unique attack in this phase is massed rocket fire that targets roughly half the arena. Pay attention to signs appearing on the ground and quickly use Hoverboots and/or Phantom Dash to leave the danger zone. 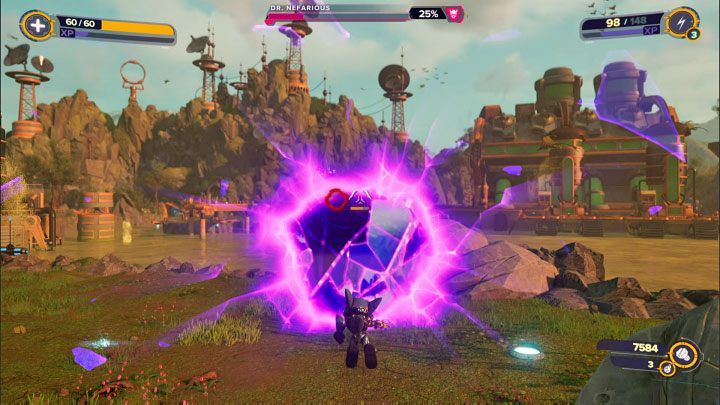 Don't forget to destroy nearby crates in order to renew your health and ammunition supplies. There should be at least a few to find.

After Dr. Nefarious will only have 1/4 of his health left, a slot will open for you to return to the arena and advance to the final phase of the duel. 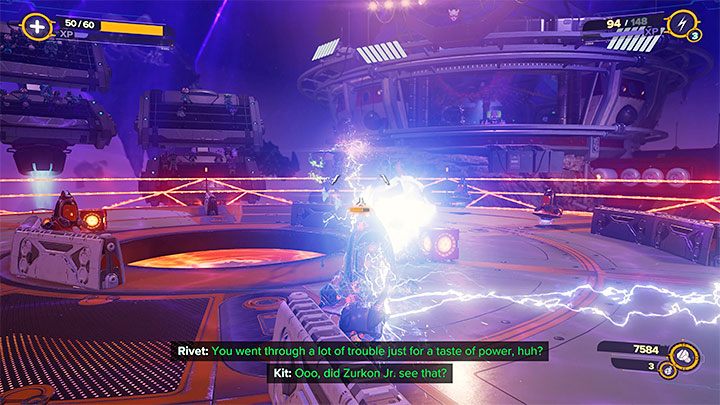 In the final phase of the fight, you must deprive Nefarious of the last 25% of his health bar.

The boss will summon minions and you should also decide to do the same. Mr. Mushroom, Glove of Doom) in order to be able to distract regular enemies from Rivet and be able to deal with attacking Nefarious. If any enemies get in your way, it's a good idea to quickly get rid of them with area attacks or, for example, temporarily stop them by using Lightning. 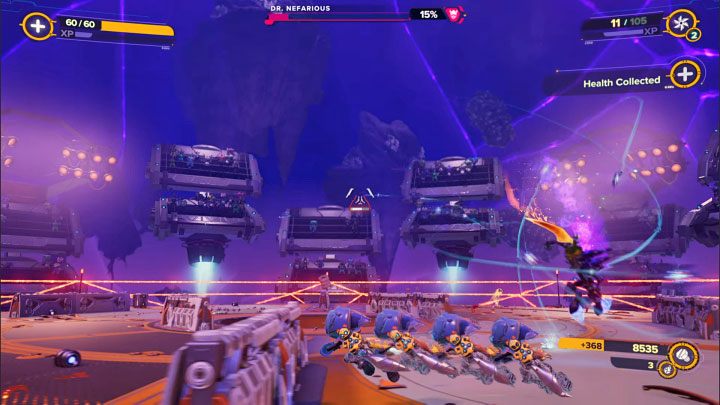 During battles, again watch out for red boxes, which can be a convenience (weakening bosses and surrounding enemies) or a hindrance (accidentally detonating near Rivet).

When attacking Nefarious, as before, avoid his melee attacks, as this is the easiest way to take damage - Phantom Dash is the universal solution to this problem. 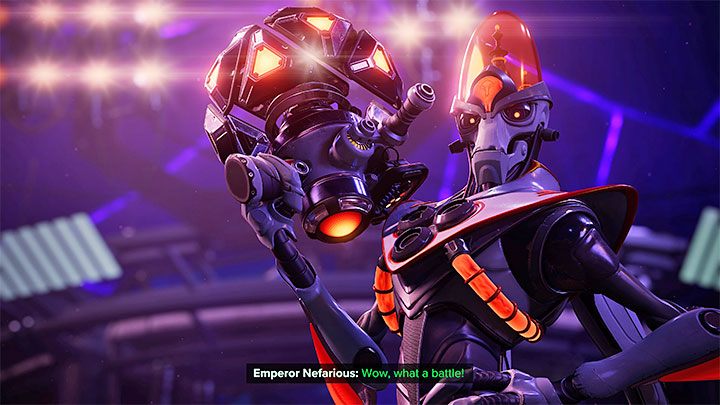 You will not succeed in ultimately stopping Dr. Nefarious, as Emperor Nefarious makes his first appearance. You will face the Doctor and the Emperor at the end of the campaign. 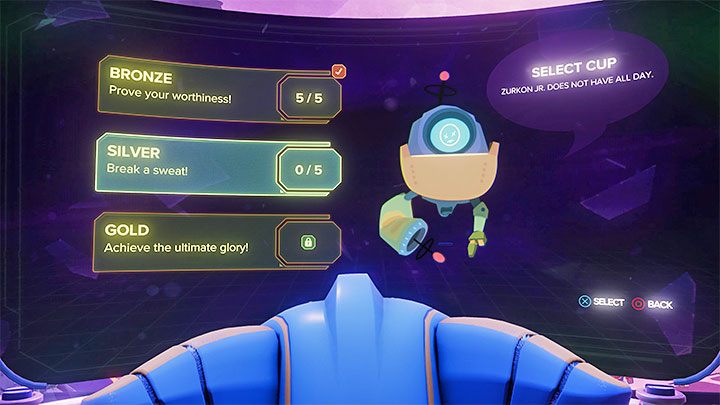 Before you continue with the main storyline, you can optionally fight in the Gastropub arena. The Silver Cup has been unlocked, so you can now enter five new battles with unique rewards.

We described the Silver arena battles in detail on the Arena - silver cup page of our guide.

Returning to the spaceship 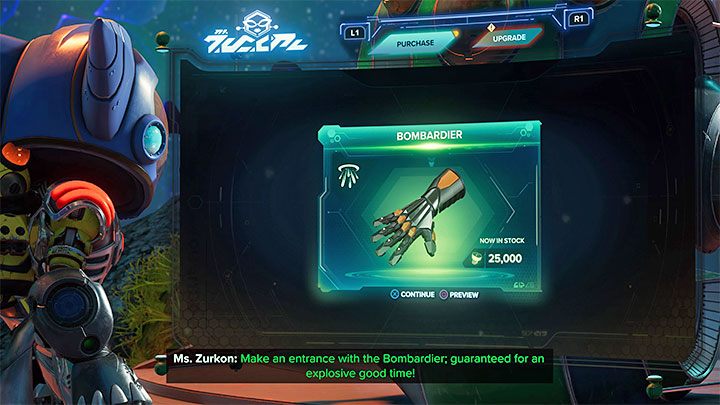 You may leave the Gastropub. Check out Ms. Zurkon's offer along the way. Her offer has been expanded, and you can purchase the Bombardier glove for 25,000 bolts. This weapon summons a flying drone that bombards the area around it for some time. This can be a good gadget for eliminating groups of enemies, but you have to aim well and choose the right place to use it so that the drone does not start attacking an empty area without enemies. 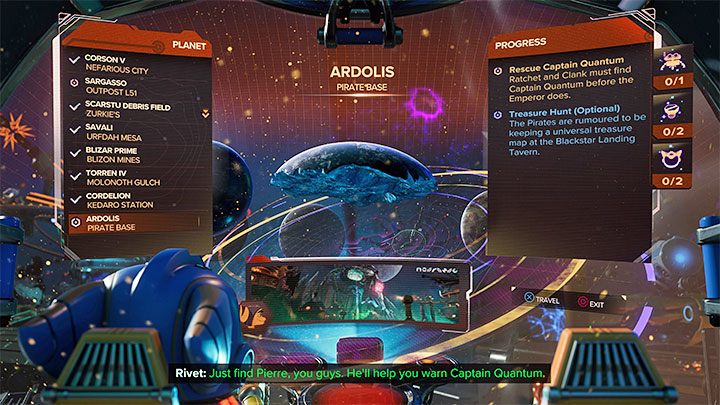 Interact with the Rivet's spaceship. A brand new location to explore has appeared on the list of planets - a pirate base on the planet Ardolis. We described it in detail in the next section of the game walkthrough.