This page of the Ratchet & Clank Rift Apart guide covers the fourth and final part of the Cordelion planet walkthrough. From our guide, you will learn how to free the beast Juice, how to defeat the Elite Security Detail (a group of bosses), and how to create a device called the Dimensionator. 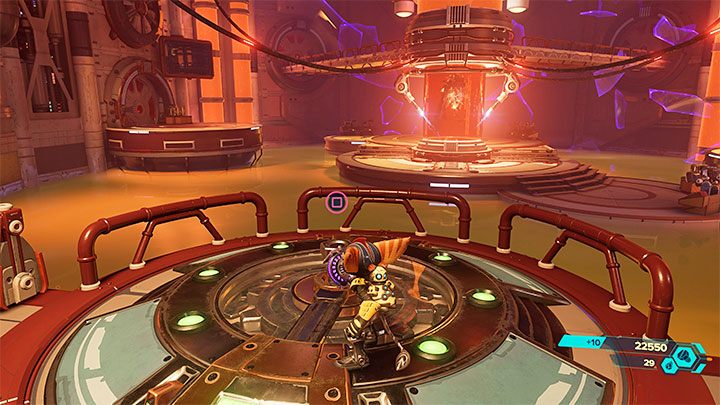 As you move through the vast underground complex of Kadaro Station in the dimension of the hot planet, you have to reach the location from the picture above. Juice is imprisonedhere.

Your task will be to free the monster to complete the mission objective to create the Dimensionator. You can liberate Juice by interacting with the crank. 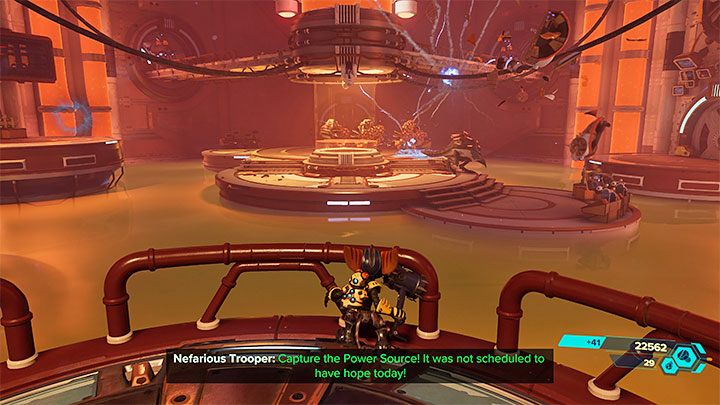 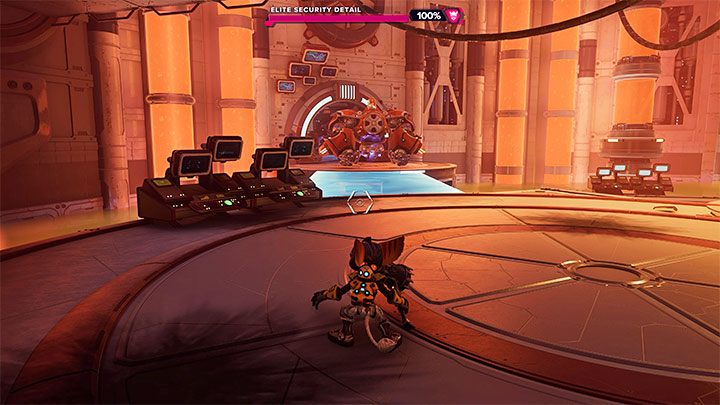 After Juice defeats all the enemies (alone or with Ratchet's support), approach the place where it was captivated. Group of bosses will appear - Elite Security Detail. Large machines will enter the arena through the previously closed door. In this case, you should definitely help Juice deal with the enemies.

Security members are a variation of the opponents known from earlier fights. You can use different weapons to attack the bosses in this battle. The Negatron Collider or the Lightning Rod (able to temporarily paralyze machines) can be useful. You may also consider using the Glove of Doom to summon additional allies (little robots). 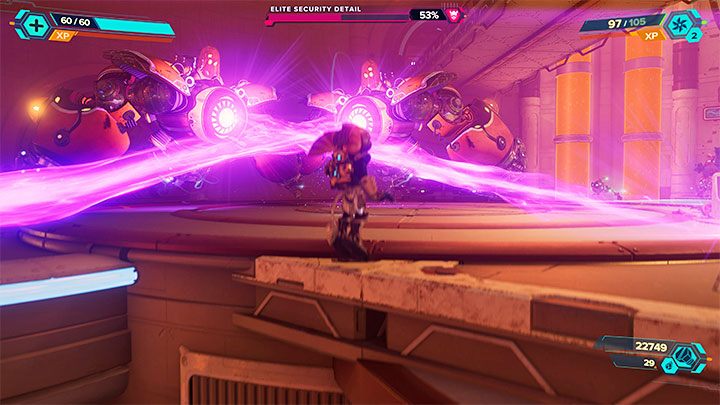 During the battles you better watch out for the powerful laser attacks of the bosses. As a reminder, you can jump over purple laser beams, or help yourself by using the Phantom Dash ability. 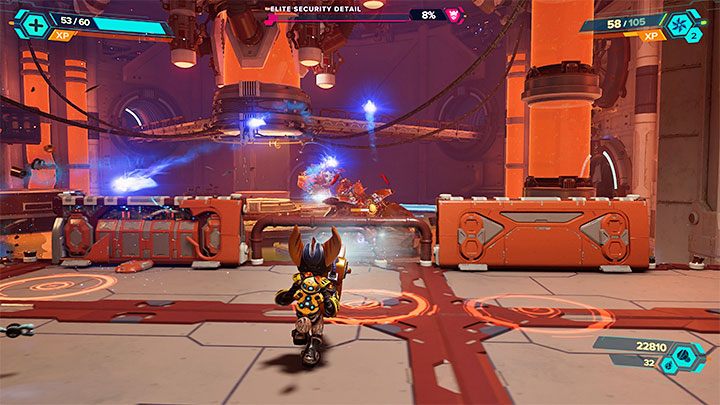 Bosses can also use a rocket barrage, and in these types of situations the best option is to run sideways. However, you can also use Hoverboot or Phantom Dash abilities. 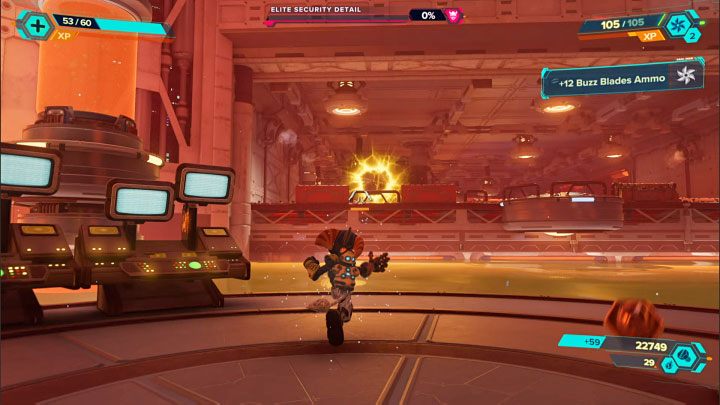 Take advantage of the fact that you can pull your hero to nearby crevices, and also return to a remote ledges where you have used the crank earlier. This can help you avoid situations in which you may get overrun by bosses. Also, it makes it easier for you to launch ranged attacks.

Don't count on enemy machines to stay close to where the Juice was released, as they can get close to you and are also capable of making long jumps - run away from where they plan to land. 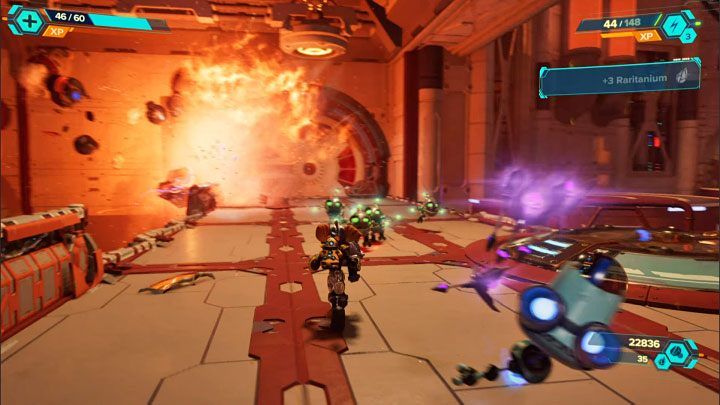 Be careful not to fall into the tank during the battle - don't get pushed down into it and rely on double jumps regularly.

Attack bosses one at a time if possible, so that as you destroy more machines the effectiveness of their combined attacks will decrease.

Return to the Forge 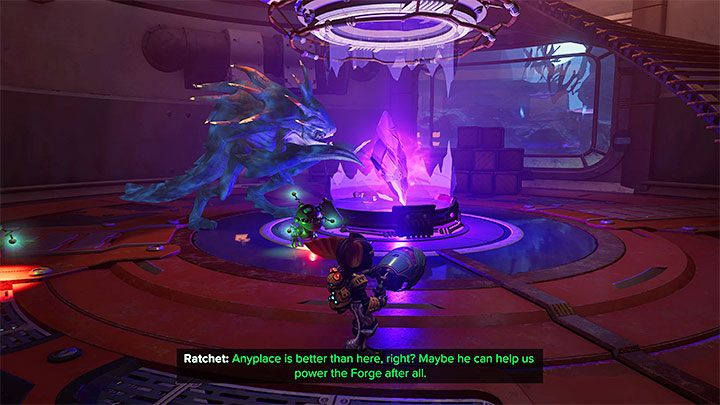 After defeating the bosses Ratchet will follow Juice and continue his journey. Choose the southwest exit of the large hall where you defeated the Elite Security Detail.

You will reach a point where Juice will break the barrier surrounding the Blizon. This will allow you to hit the Blizon and move to a frosty dimension. 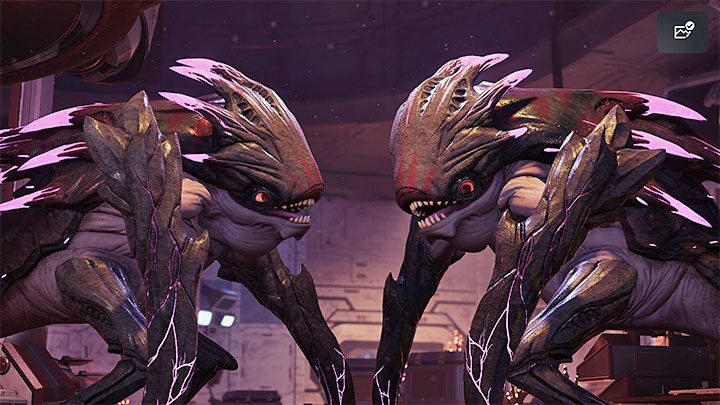 You will get to the Manufacturing Division. Go up the stairs and enter the Forge room. You will see a cut-scene of the encounter between the two Juices. You will find out that they are friendly to each other. 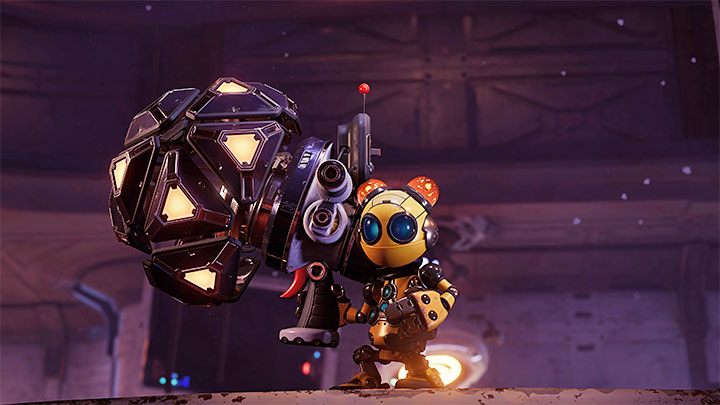 The Forge will be activated during a cut-scene (you don't need to do anything else), and you will automatically get the Dimensionator(a quest item).

Return to the surface 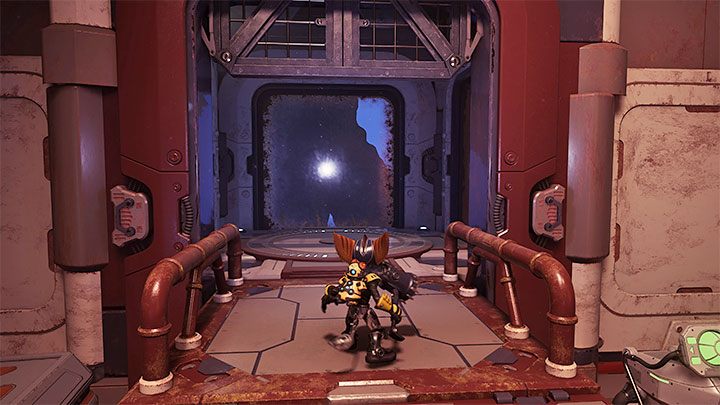 This mission objective is very simple. In the Forge (the place with the two Juices), the elevator shown in the picture has been unlocked. Use it to return to the surface - the platforms surrounded by water. 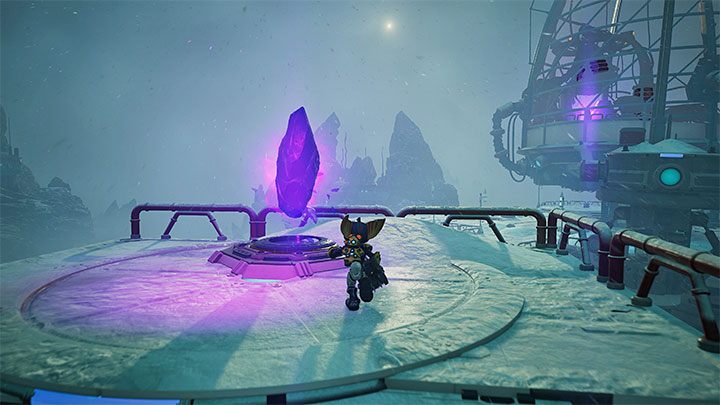 Once you reach the top, hit the Blizon to return to the dimension of the hot planet. Then place yourself on the square platform that will take you to the spaceship.

If you have visited all the planets in the same order as in our guide, then the next step will be to return to the Scarstu Debris Field, where the characters can meet in the Gastropub.