This page of the Ratchet & Clank Rift Apart game guide contains the second part of the planet Torren IV walkthrough. The following guide explains how to use the Hurlshot correctly, how to defeat the Wee Roger boss, how to get near the Fixer and reboot the big machine, and more.

Return to Town with the Hurlshot 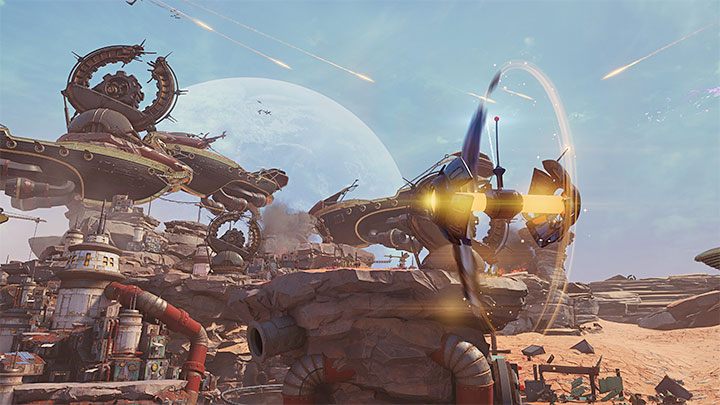 As soon as you obtain the gadget called the Hurlshot, you will be able to test it. The gadget described here is used on interactive hooks (the same ones you've been using so far to swing on a rope) and you can find one right next to it.

You must hold down the L1 button for a few seconds, that is, until your character begins to swing on the hook at maximum speed. This will catapult you with maximum force when you let go of the L1 button, allowing you to cross the longest possible distance. 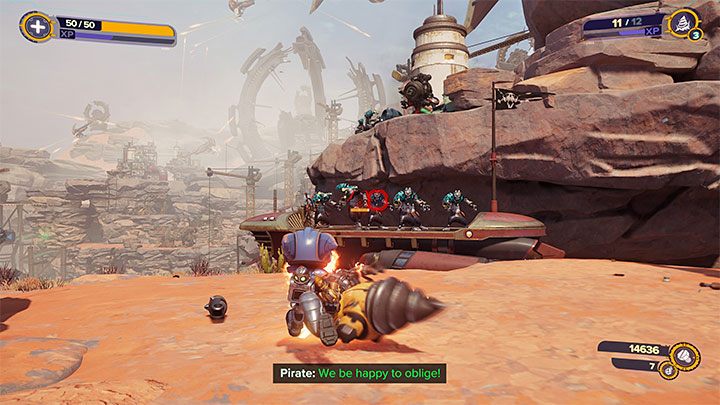 Expect to fight more pirates that will arrive on the map via flying ships. It's a good idea to use strong weapons to attack groups of pirates before they jump off each ship and scatter.

Along the way, you'll have to use the Hurlshot twice to catapult Rivet to a new rock ledge and then toward the larger ship. 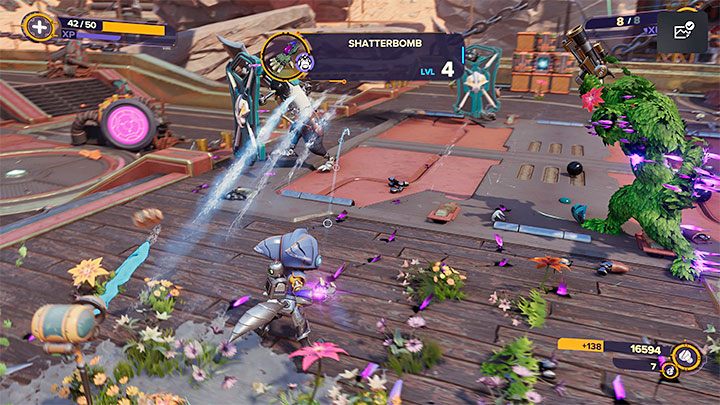 Once you arrive on the main deck of the large ship, you must first face some "standard" pirates in combat. They shouldn't be too difficult to defeat, however, avoid positioning yourself near explosive crates that can be detonated after random attacks by enemies.

In the case of pirates carrying shields, again try to distract them by summoning helpers or attacking them at short range once they become vulnerable. 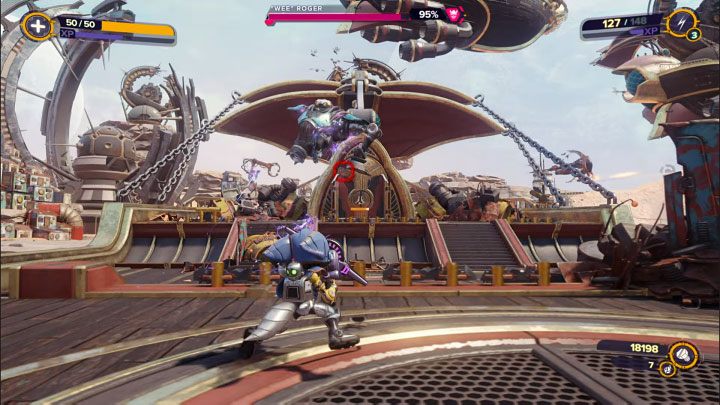 As the battles unfold on the main deck of the ship, a short cut-scene will play to herald the arrival of the boss Wee Roger. During the boss fight, try to stay on the move at all times. Use Phantom Dash or the Hoverboots so that your character doesn't get trapped in a corner too easily and receive a lot of damage.

Wee Roger can jump pretty far, but you should always make sure to move away from where he is about to land. 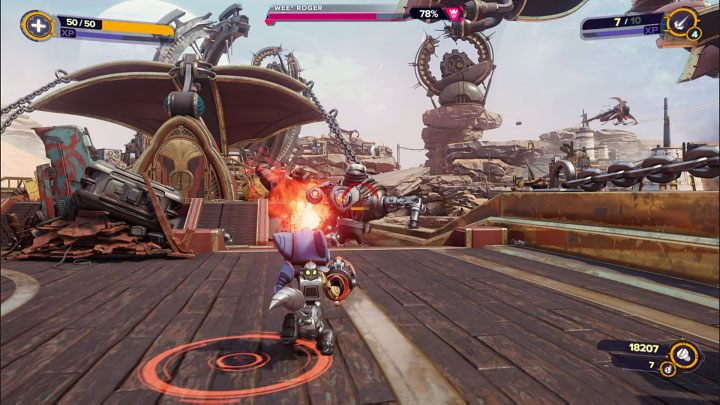 Wee Roger shoots with explosive mines. Red markings on the ground indicate the landing spots of the projectiles. You can try to destroy explosive projectiles while they're flying or use Phantom Dash to easily move away from the spot where they are about to hit. 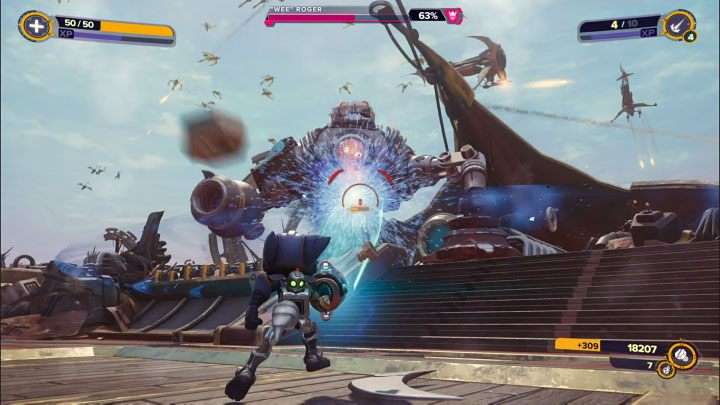 You can use different weapons to attack the boss. For example, a Negatron Collider may come in handy or a Lightning Rod that can paralyze a large opponent for a few seconds.

On the ship you can find some crates, thanks to which you can try to replenish ammunition as well as heal yourself. 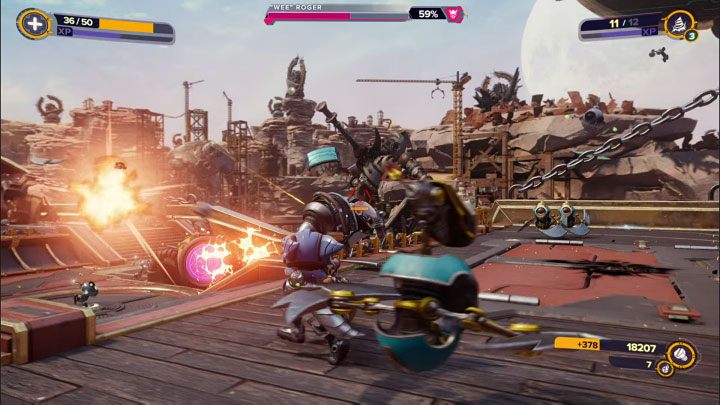 As you take part in the battles, new weak opponents may appear on the board. It is best to get rid of them by using strong AoE attacks or throw Shatterbombs so that you won't waste too much time wiping them out.

Upon defeat, the boss will disintegrate into pieces. Another cut-scene will play, this time depicting your encounter with Pierre and you will end up in Little Junktown. 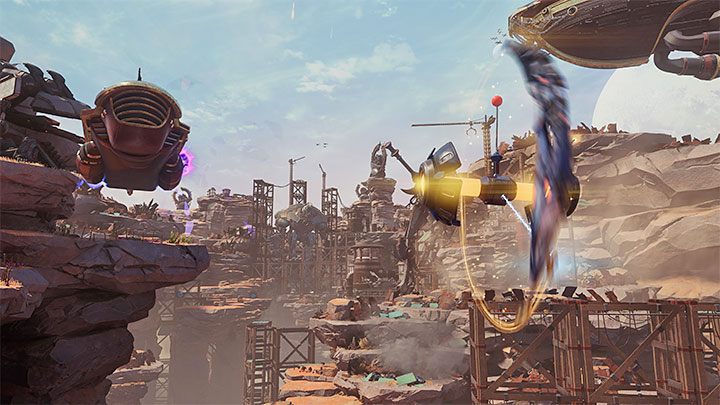 You will need to head towards the Fixer and since you have unlocked the Hurlshot, you can now use the hook to the east of the village to catapult yourself towards the new island. 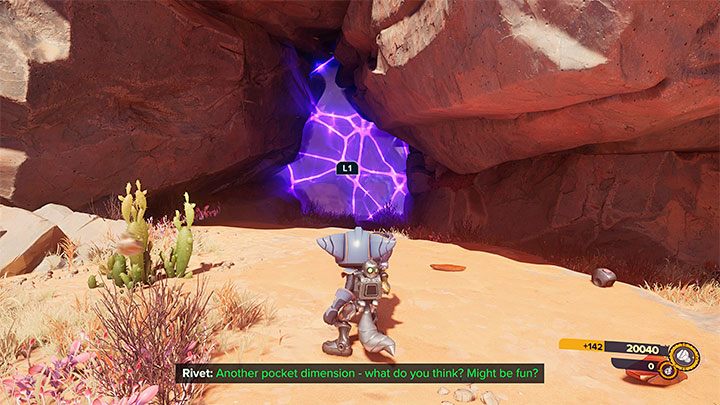 Once you land there successfully, dispose of the some more weak monsters and look around for the pocket dimension shown in the screenshot, which is hidden among the rocks. By opening up the pocket dimension, you'll be able to ride on a Speetle and launch yourself off of ramps (be sure to accelerate!). Going through the entire micro-dimension will earn you an armor piece. 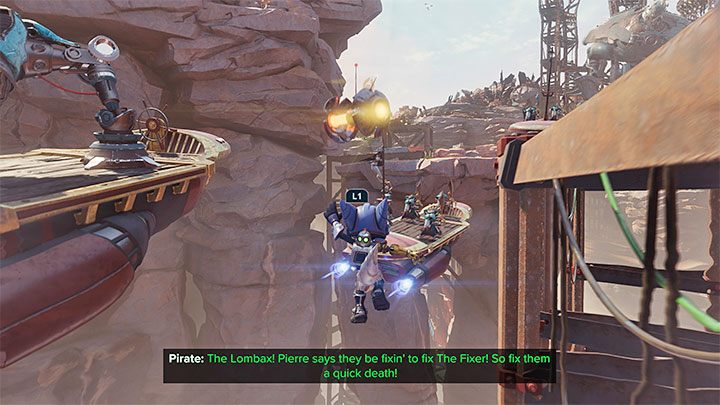 Once out of the pocket dimension, make use of the nearby hooks. The consequent jumps will lead you to a small ship and then on stable ground where a battle against some "regular" pirates awaits you.

During battle, distract the enemies carrying shields or attack them when they become vulnerable. Use good weapons to eliminate the pirates attacking at range and make sure to use Hoverboots and the rifts when you are in danger. Once the battle is won, head to where you will need to use the Hurlshot. 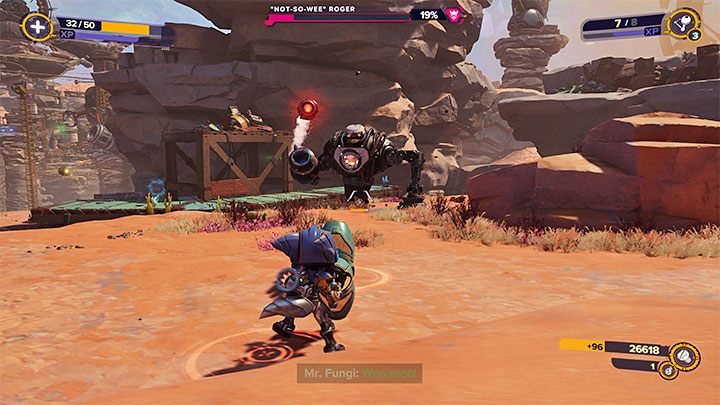 Before long, a new mini-boss - Not-So-Wee Roger- will be joining the fray. The fight against this mechanical opponent is very similar to the previous confrontation against the boss Wee Roger. Here are the key features of the encounter:

The one difference during this fight is that more pirates carrying shields may appear in the area. You can ignore the boss' vanguards, or switch to good short-range weapons and wait for enemies with shields to briefly expose themselves before launching a melee attack. This will allow you to easily weaken, cripple or eliminate them.

After winning all the fights, find the location from the screenshot to continue your journey. To start, you will need to activate the Hoverboots, run over the pressure plate with arrows and then run on the wall. 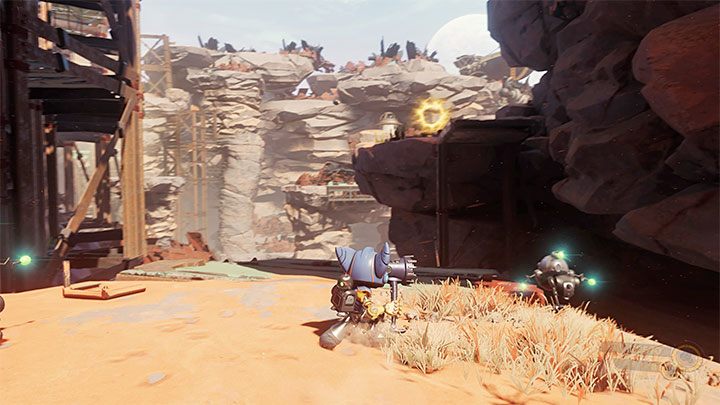 Get rid of some new regular monsters and look around for an interactive rift on a higher platform. Once you have used it, attach yourself to the new hook and swing on it to use the Hurlshot correctly. Repeat the process with the next hook to land on the rail. 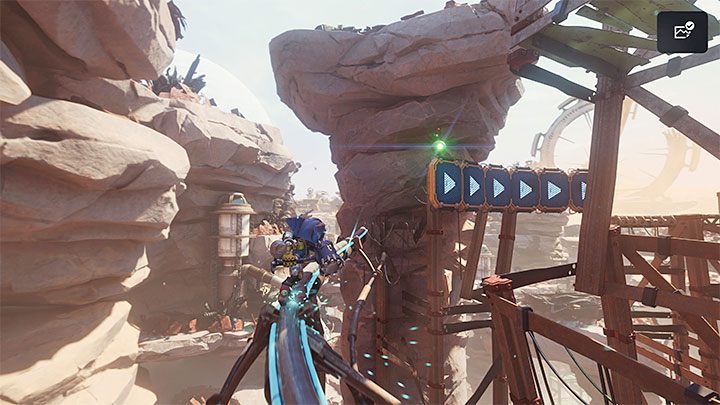 This section is filled with moments that require more focus. In the location from the screenshot, you need to attach yourself to the hook and run on the wall. 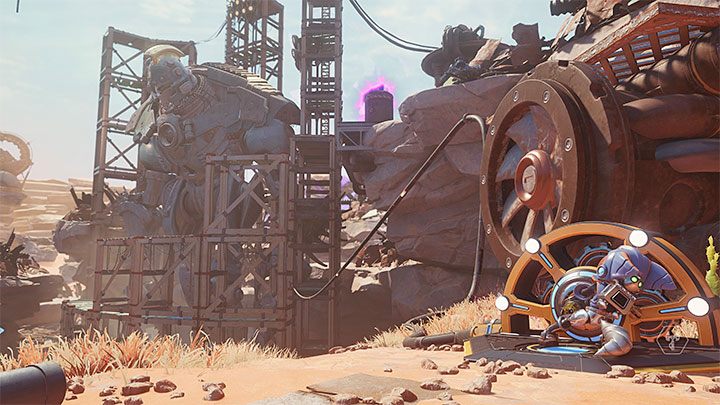 Eventually you will reach a crank located next to a large inactive machine, the Fixer. Interact with it.