This page of the Ratchet & Clank Rift Apart game guide contains the first part of the planet Torren IV walkthrough. You'll learn how to reach the first village, how to complete the rail riding stage, how to defeat the pirates carrying shields, and how to get the Hurlshot used to catapult yourself off of hooks. 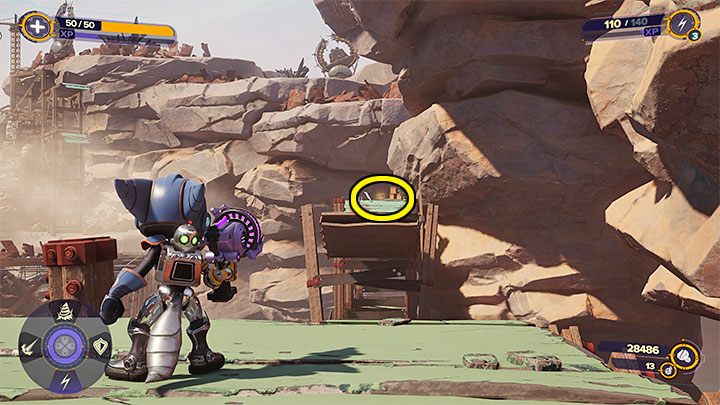 You begin in the southern part of the planet Torren IV and will first need to reach the nearby village.

Near the starting point, you have to deal with a group of overgrown frogs. You will also probably notice a Gold Bolt in the distance. Don't try to reach the ledge on the other side of the chasm, as it is too far away. Instead, explore the southern area. You can use the hoverboots there and hover over the arrow board, then take any opportunity to use more boards along the way, run on the walls and grab onto the hook. 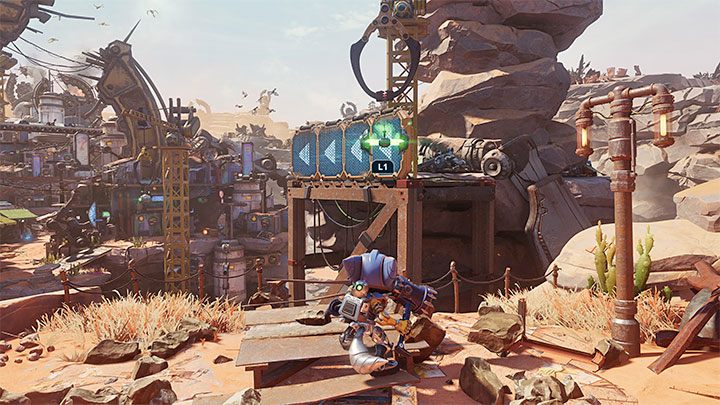 On the way to the village, you have to grab onto the hook pictured in the screenshot, swing on the rope and run on the nearby wall. 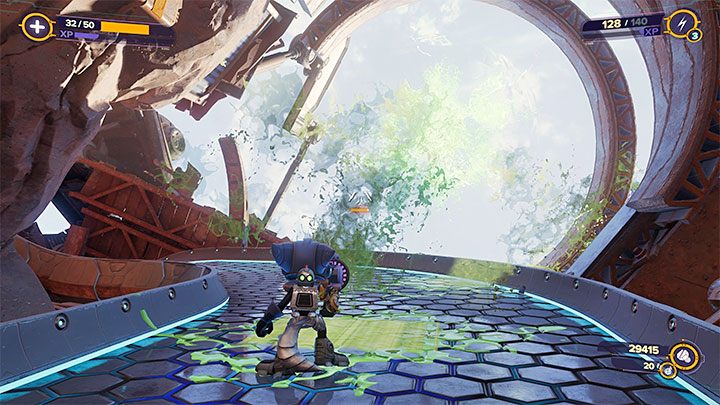 Before you head straight for Mrs. Zurkon, who is visible in the distance, you should explore the optional path to the right. It will lead you to the location from the screenshot where you can use the magneboots. Follow the magnetic, twisting path to reach the area under the village, where you will find a spybot (one of the collectibles) and a large stash of raritanium. 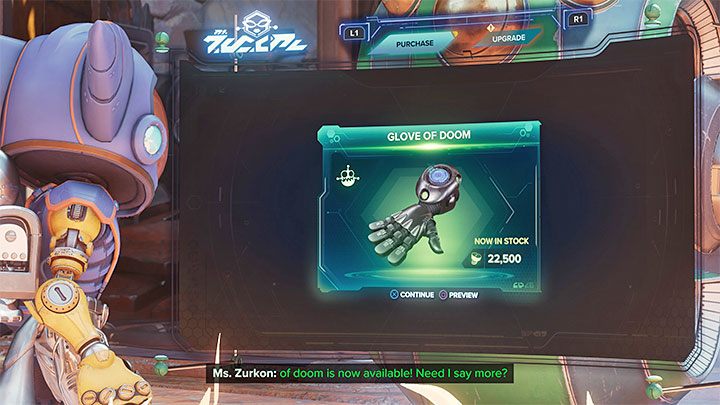 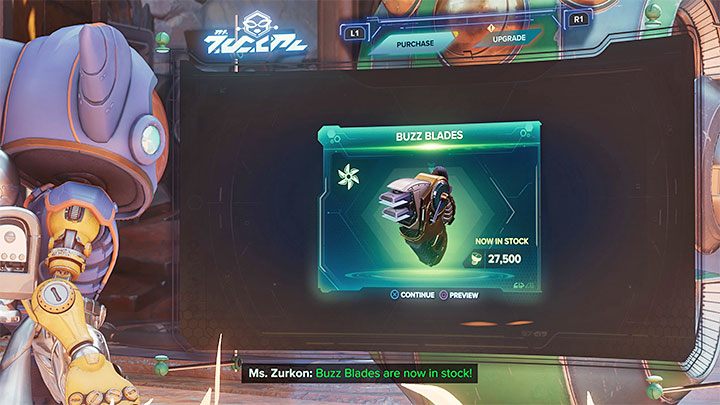 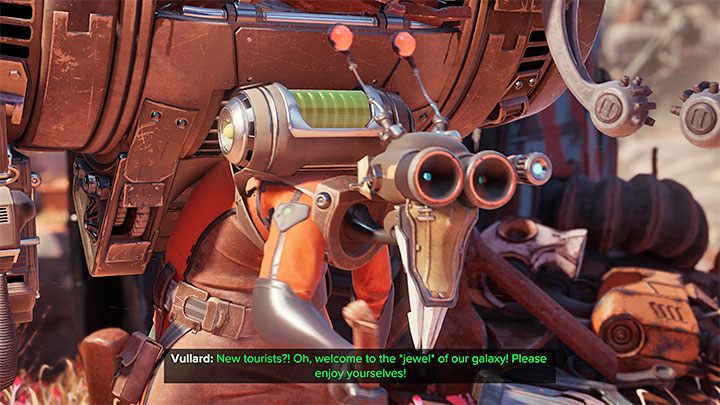 Near Mrs. Zurkon's store, you will encounter one of the Vullards, who are galactic scrap dealers. The friendly NPC will inform you about a large machine called the Fixer and the chance to obtain a Hurlshot.

Recover the Hurlshot from the Smelting Pit 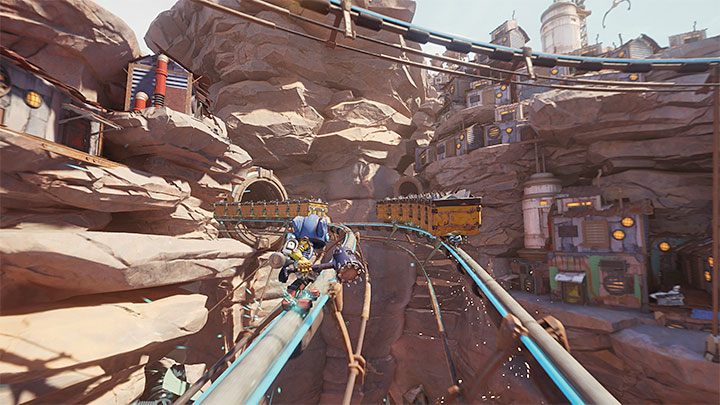 You must head north in your search for the Hurlshot. Expect some easy fights with local fauna along the way.

In order to reach your destination, you will need to hop on the rail and ride it for a longer while. When riding, jump to adjacent rails or do double jumps to avoid collisions. 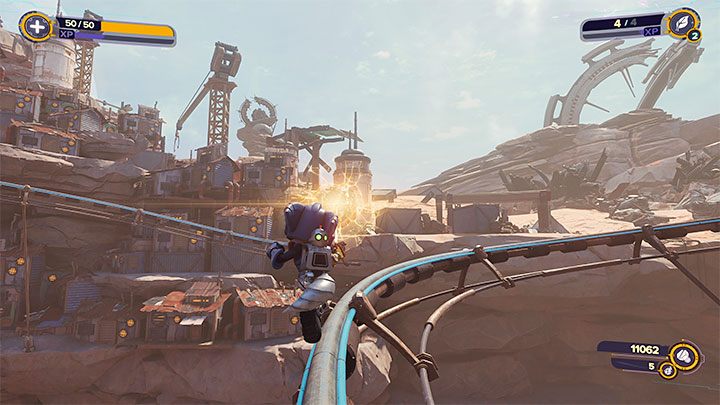 Later during the ride, take the opportunity to quickly pull into the rift from the screenshot above. This will allow you to reach the side rail that will consequently lead you to the Gold Bolt that is levitating above the rail. 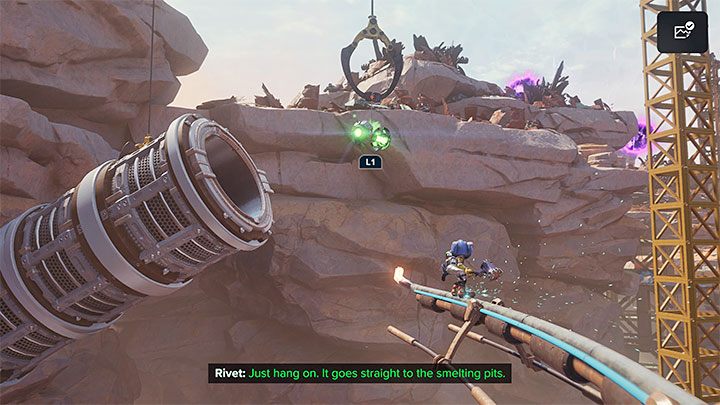 Return to the "main" rail and resume the ride, which again involves dodging wagons. Additionally, in the spot from the above screenshot, you have to grab onto the hook (L1). Shortly after you perform this action, you will start running along the wall.

Once you've completed the trek, use the hook again. You will reach the location where Pierre's pirate lackeys appear. 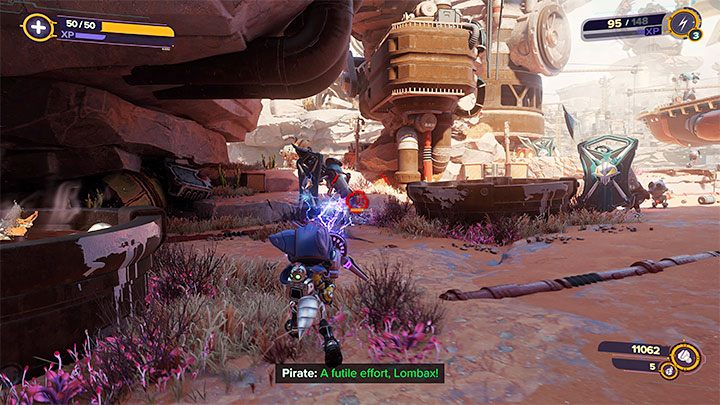 During the battles, you may notice that some pirates are using large shields and this can make it difficult to get rid of them. The easiest way to deal with this problem is to use short range weapons and attack the pirates the moment they become vulnerable, i.e. when they attempt to attack you in melee.

Alternatively, you can rely on helpers (Mr. Fungi, the recently acquired Glove of Doom), who can aid you in eliminating the pirates using shields or distract them so that they position themselves with their backs or sides exposed to Rivet. Also look for opportunities to hit the red, explosive barrels during battles. 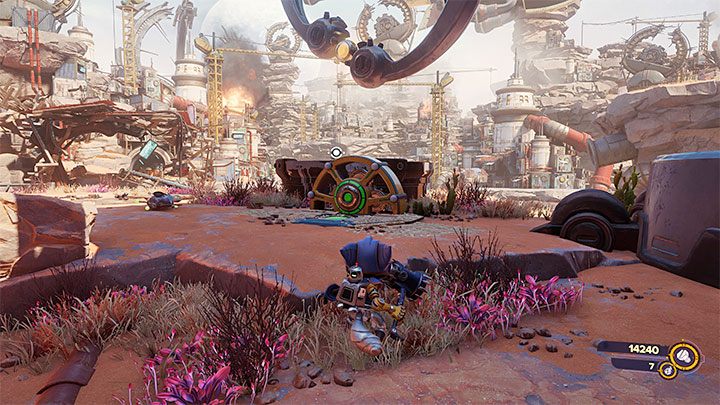 After the battles are over, you can collect loot from the area or immediately use the crank from the screenshot above. The orb held over the crank will be lowered and you will obtained the sought-after Hurlshot.