This page of the Ratchet & Clank Rift Apart game guide is the third part of the Blizar Prime exploration walkthrough It explains, among other things, where the Chief Engineer is in the miners' colony, where to find all 3 scout bots, and how to survive the battle in the location with the Engineer. 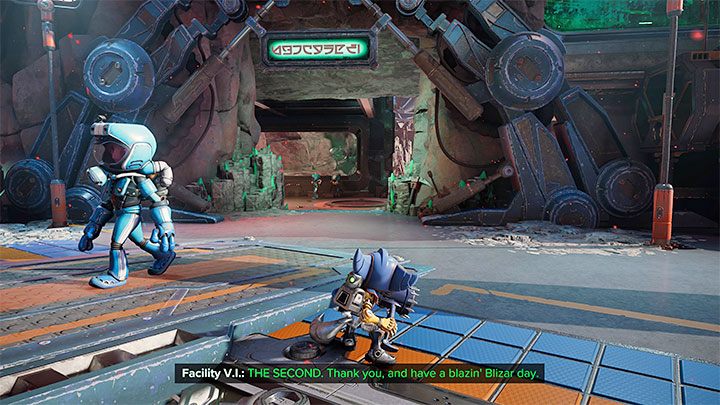 You must start at the Mining Hub in the pre-cataclysmic dimension, a location with a large number of friendly miners. Choose the west passage and use the new large moving platform. It will take you to the Survey Station where the Chief Engineer resides. 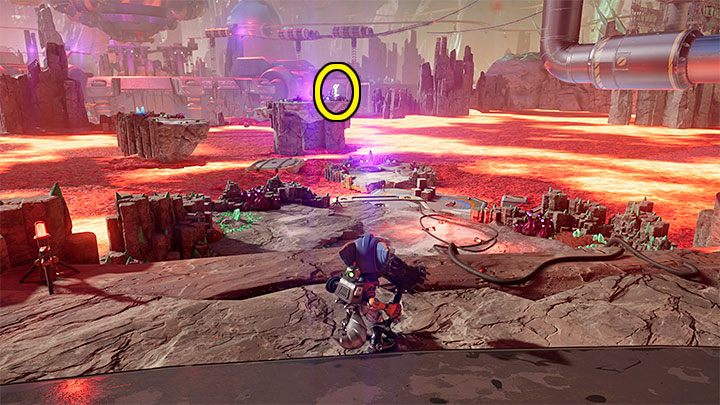 Investigate the area shown in the screenshot to the north of the Chief Engineer's location. You will notice a piece of armor on the top ledge in the distance.

In order to reach it, you must first hit the blizon surrounded by lava, which will transport you to the dimension after the cataclysm. You must make double jumps to the next ledges and reach the second rift. After hitting it, you will find yourself right next to the secret. 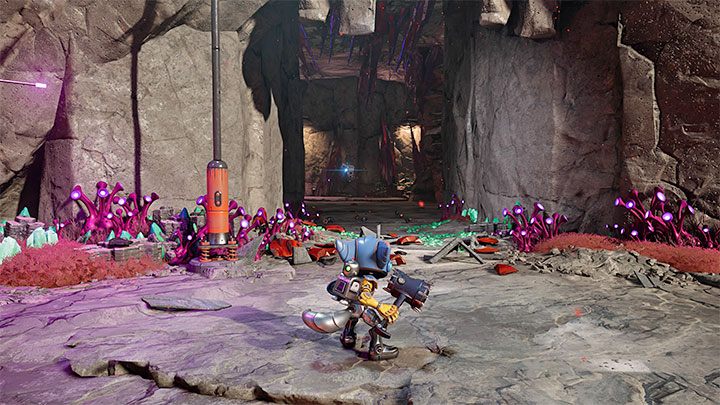 The science bots are in various parts of the area west of the Chief Engineer's location. You will reach them in a set order.

As you cross, leap over the lava and pull yourself to the rift. Head south - towards the cave with the first bot. All bots found immediately set off on a journey to the engineer's meeting point. 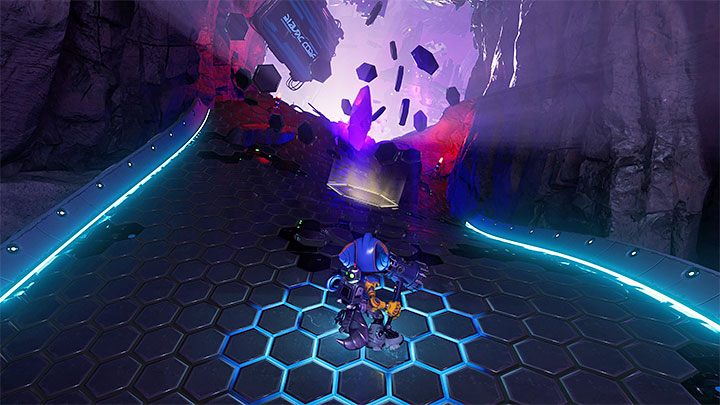 Hit the blizon to reach the dimension after the cataclysm. Deal with the surrounding Nefarious machines.

Locate the magnetic path and use it, jumping to the other part of it along the way. Eventually you will reach the blizon in the image above, which will return you to the dimension before the disaster. 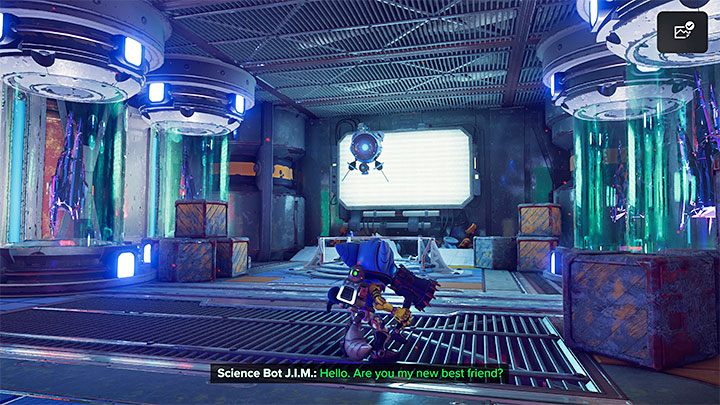 Head west and expect more fighting along the way. In the new location, locate the path leading to the blizon and hit it.

In the post-cataclysm dimension, listen to the Mysterious Stranger's message and score a march to the next new blizon. When you return to the dimension before the cataclysm, you will meet the second bot. 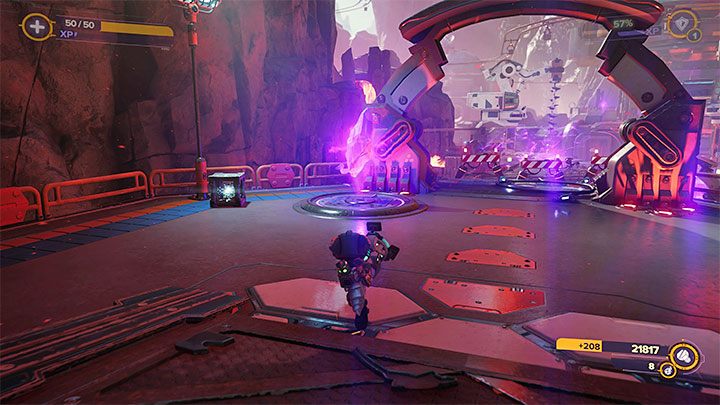 Return the same way east and expect to encounter a group of thugs on motorcycles as you approach the cave exit. Deal with them.

After the battles are over, take interest in the northern blizon shown in the screenshot. It was previously surrounded by a force field, but now you can hit it. 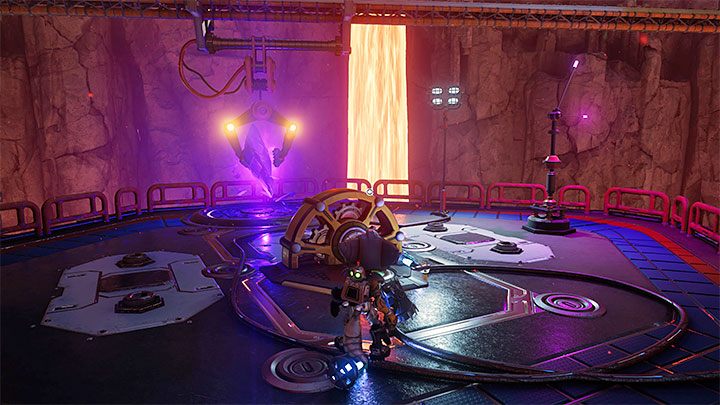 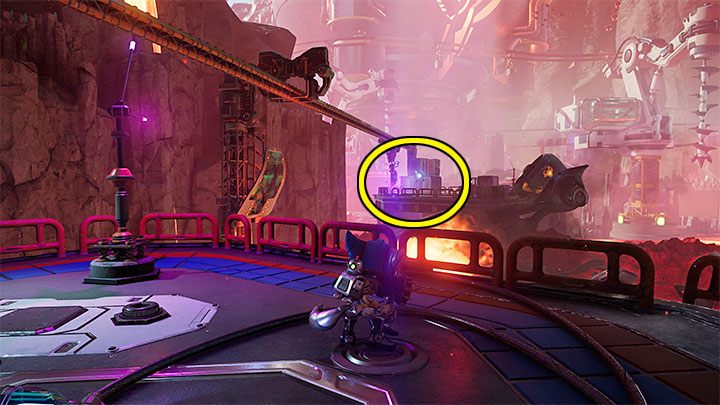 Once you are in the dimension after the cataclysm, you must complete the crossing to the north, which involves using new magnetic paths. Eventually you will reach a blizon that allows you to return to the location before the disaster.

Defeat the group of small monsters and reach the crank in picture 1. Interact with it to move the local blizon to the nearby round platform from image 2 - the wanted bot will also be visible there. 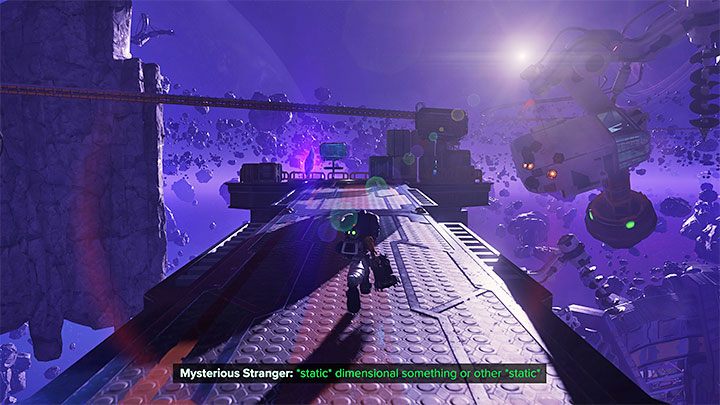 Go back to the previous blizon and hit it. Run north along the metal path shown in the image - in the distance you should be able to see the rift that you moved in the previous dimension. 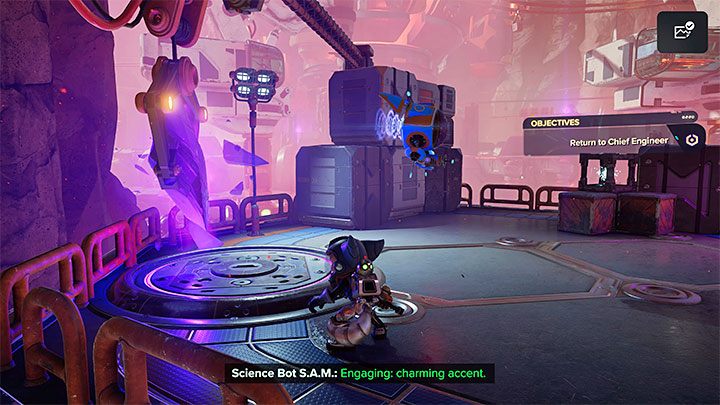 After hitting the blizon, you will find yourself next to the third bot. 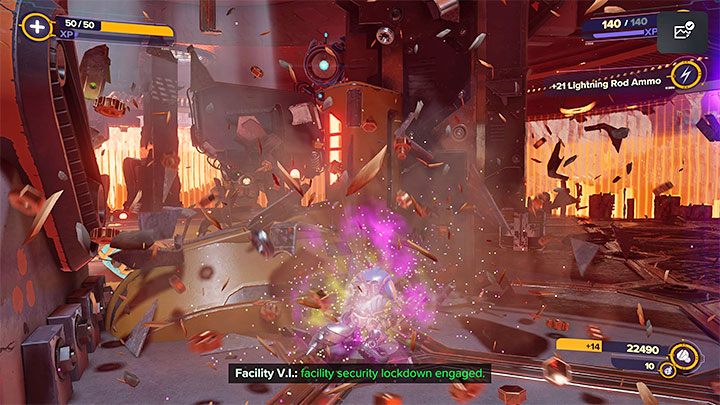 You can set off back to the central location where the Chief Engineer resides - to reach your destination, pull yourself to the rifts and use the moving platform.

A bigger battle awaits youat your destination. Before it begins, it is worth looking around for boxes where you can find ammunition and health (don't destroy the latter if you still have a lot of health points). 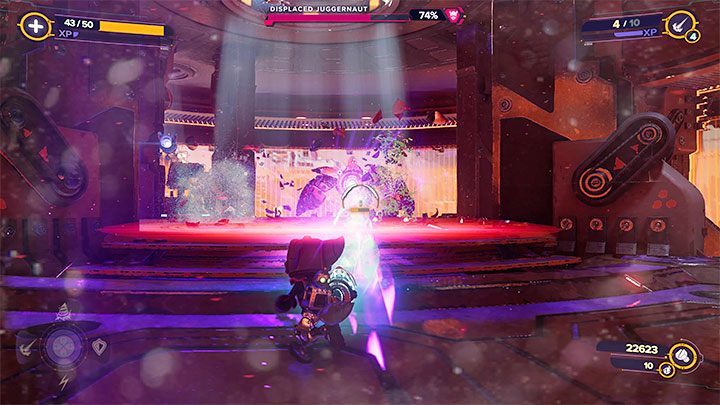 Most notably, a mini-boss , the Displaced Juggernaut, will appear in the area. It has identical attacks to all other such mechanical opponents, so you have to watch out first and foremost:

"Ordinary" monsters will also appear in the arena, but deal with them only if they clearly interfere with attacking the jaggernaut. After winning the battle, you will learn from the engineer that you will be able to use the big drill.