On this page of the Ratchet & Clank Rift Apart game guide, you will find a detailed description of all 3 parts of the Emperor Nefarious final boss battle. You will learn how to fight a giant walking machine, how to destroy the heart of a mech, and how to defeat Emperor Nefarious in a direct confrontation.

Unlocking the final battle of the game 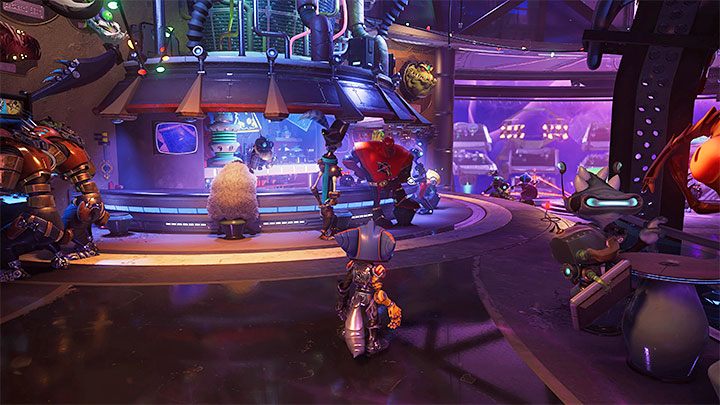 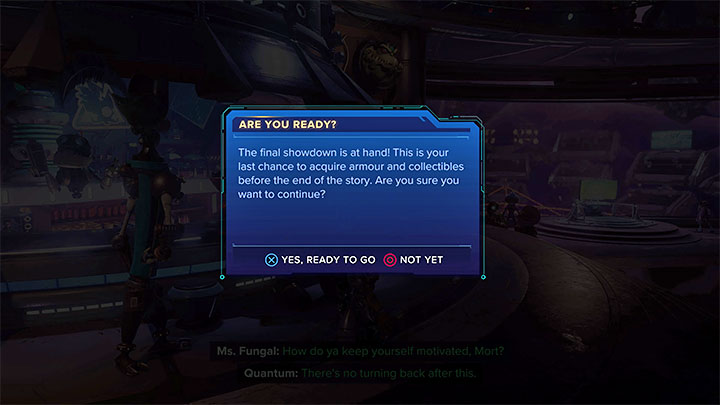 You will be able to reach the final confrontation with Dr Nefarious and Emperor Nefarious after you have safely returned from the planet Viceron, where the prison was located.

Once you reach the Gastropub in Scarst Debris Field you must meet Captain Quantum at the bar and confirm your desire to begin the campaign's finale.

The game will allow you to return to your pre-final state after completing the main storyline. We have described that in detail on the Point of No Return page - is there one? in the FAQ section of our guide. 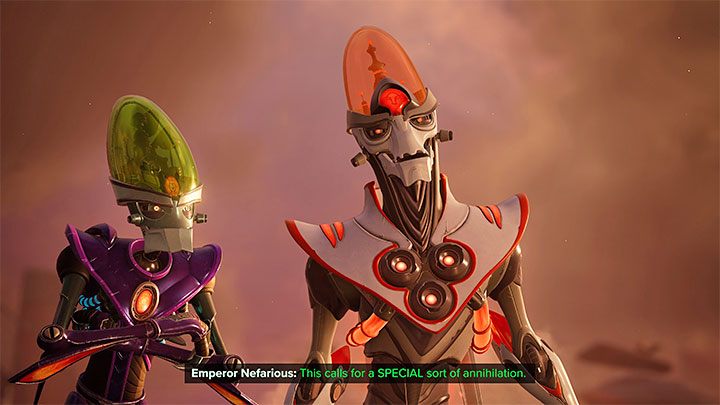 Once you reach the area where two Nefarious bosses reside, a cut-scene will launch. After that the chase will begin. This is only a partially interactive scene where you can select targets for Trudi to fire at. 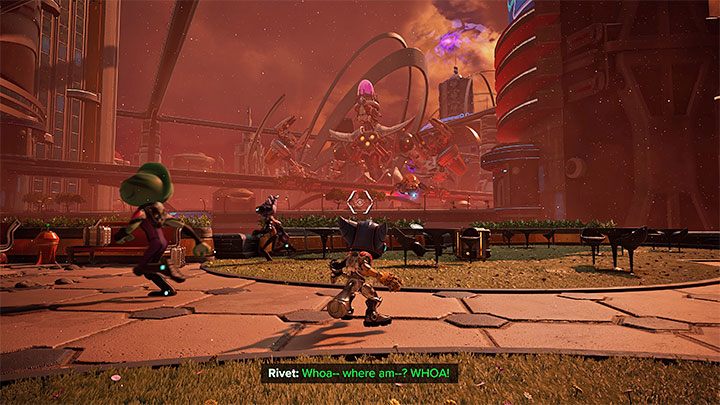 After some time you will reach a point where a large walking machine controlled by Emperor Nefarious will appear in the distance. This machine will be your first opponent in the final boss battle. 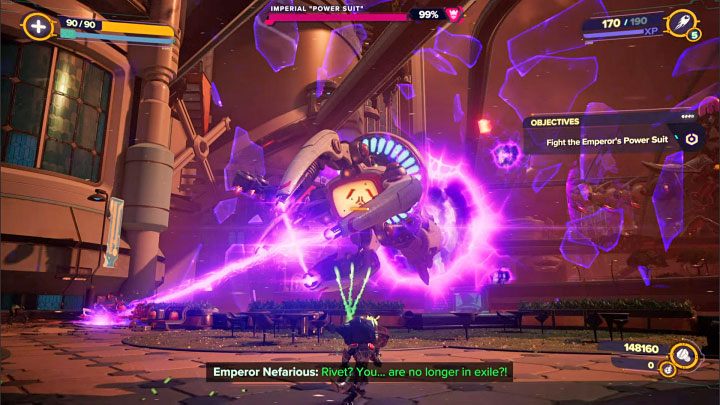 The most important tip - don't try to aim at the large machine visible in the background. Your task will be to attack the particular body parts of the mech appearing in the foreground. Only then the machine can be weakened.

Most of the time, you will have to attack the monitor mounted on the limb of the mech. However, be careful as it shoots purple beams that move from left to right and change direction from time to time. You must skillfully use the Phantom Dash and use it just before the beam approaches. 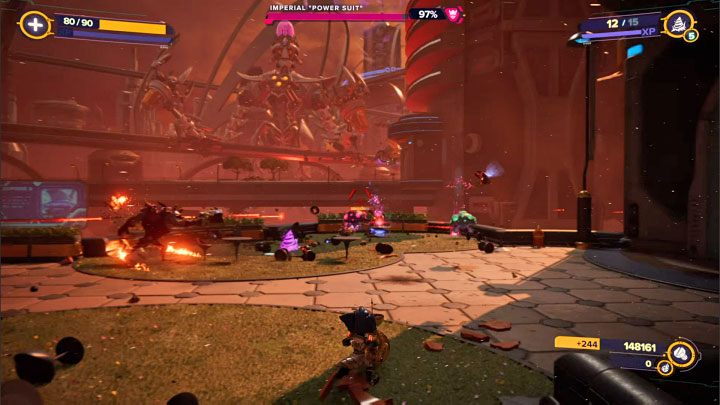 Emperor Nefarious will summon small machines during the battle. Summon your own minions (Bombardier, Mr. Fungi, Glove of Doom) to get some help in the battle. They will be able to attack standard enemies and, above all, effectively distract them from the controlled character. 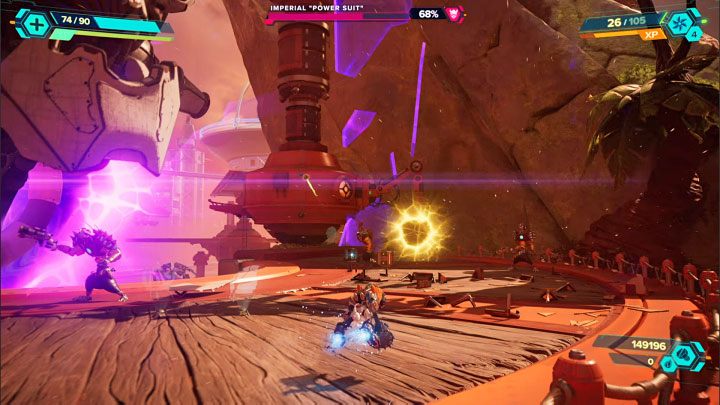 You will advance to the next phase of the battle after the Imperial Machine has lost 25% of its health points. It's worth to look around and check the new battle arena. Pay attention to the side Rifts so you can escape to new places if necessary. You will also find crates with supplies and some health in the area, but don't use them up too quickly. 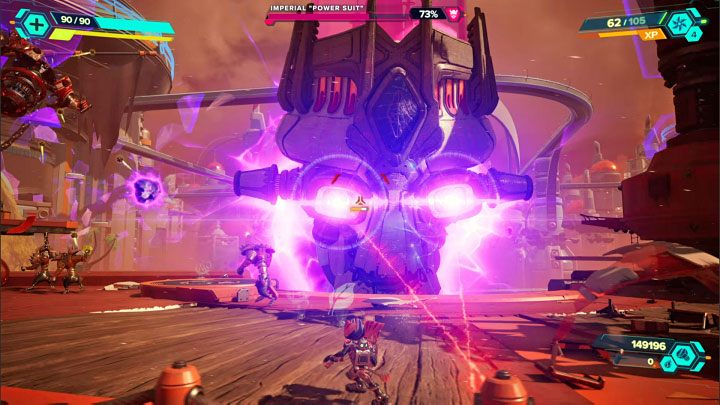 Focus on attacking any eye of the Imperial Machine. Once again, you must evade the purple beams of the boss. The best option for avoiding damage is to rely on Phantom Dash, Hoverboot or to use Rifts around you. 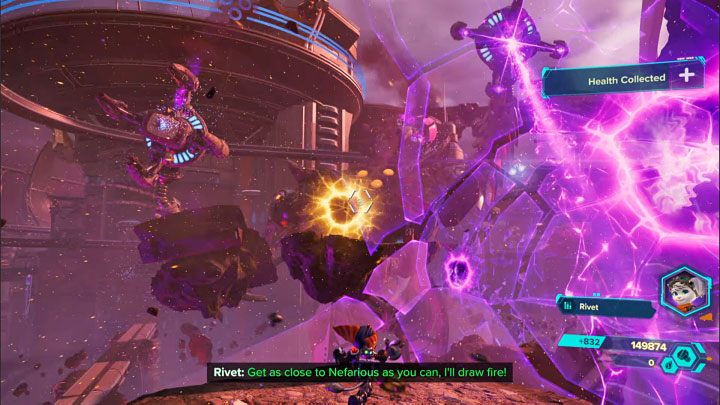 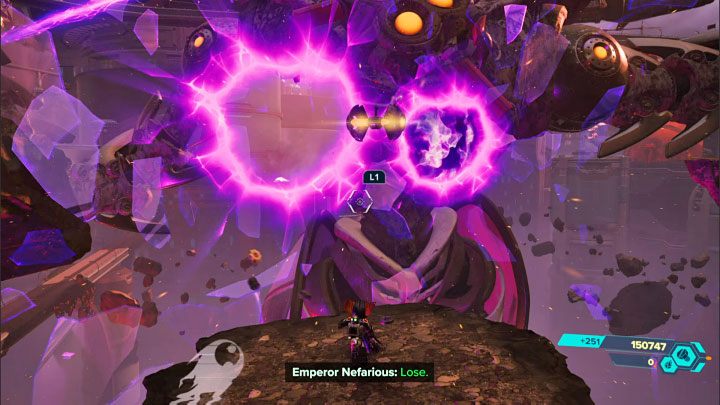 You must take turns while attacking the boss' eyes and new monitors until his health bar drops to 0%. The game will force you to pass the section of running up to the boss. Jump on consecutive platforms suspended over the chasm (it's a good idea to help yourself with double jumps) and use Rifts along the way. Ultimately, you must reach the ledge located closest to the boss.

Hold down L1 to grab the hook, swing on it by using the Hurlshot and catapult yourself towards the Imperial Machine. The action moves to the mech's Heart chamberand you will advance to the second part of the final battle. 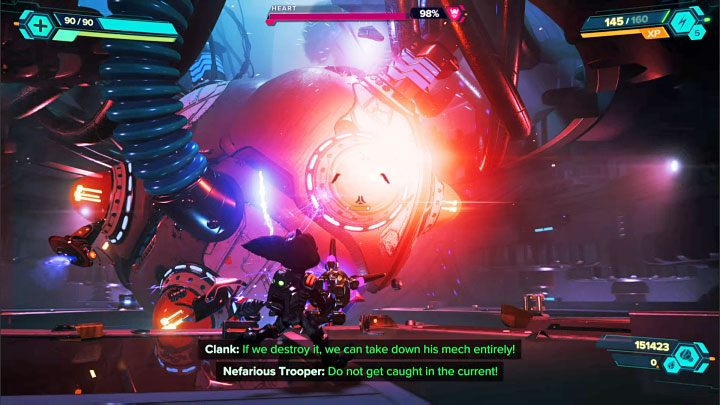 The second battle will take place next to the large mechanical heart of an Imperial Power Suit. The first task is to destroy 6 Heart Nodes, which are red objects installed on the heart.

You can attack the nodes in any order and run around the heart to find more. Consider using better weapons to deal more damage and destroy nodes faster. 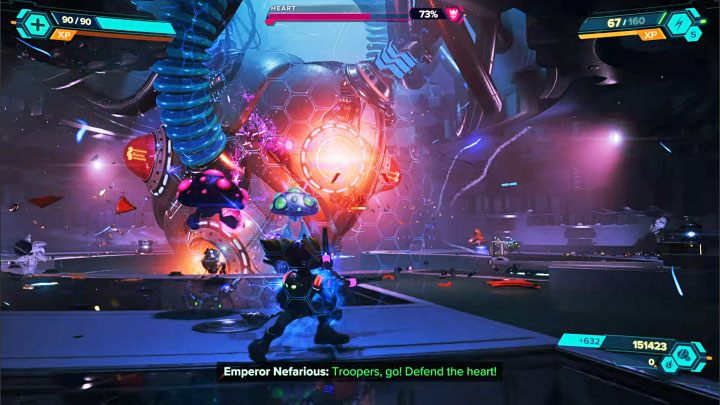 On the ledges surrounding the heart you will again meet standard opponents and as before the best tactic is to summon allies such as the Glove of Doom or Mr. Fungi. This will allow you to focus on more important targets. 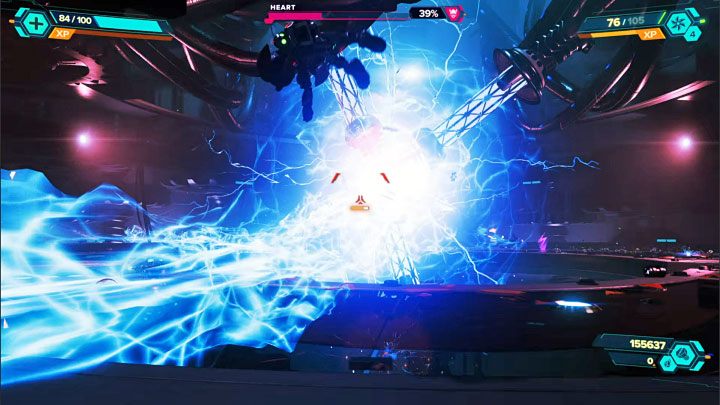 Once the nodes are destroyed, the more difficult phase of the battle will start. You must destroy the heart by depleting its health bar to zero.

While attacking the heart, you have to jump over the waves of electricity - work out the right rhythm by making double jumps. Launch your attacks in between the jumps. 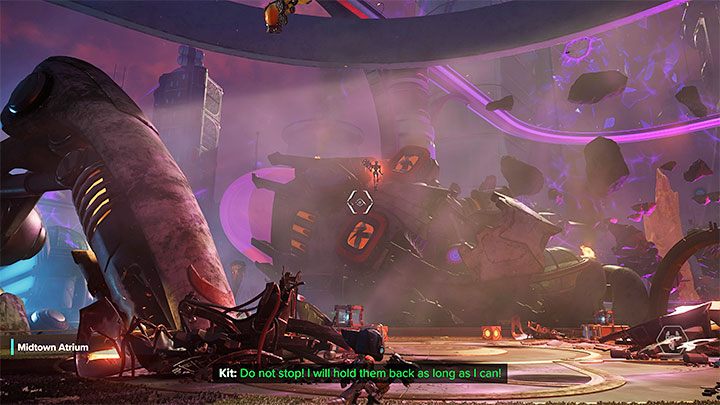 In the final third battle, you will engage in a direct duel with Emperor Nefarious in the atrium. The boss will personally fly over the battle arena.

The final stage of final boss fight is similar to the confrontation with Dr. Nefarious from earlier stage of the campaign. However, you have to reckon with the fact that the Emperor is very durable. Try to use your best weapons to attack him right from the start, and if possible, try not to miss in order not to waste your ammo. At the same time, avoid losing too much health in this duel, as there are not too many crates with health supplies around you. 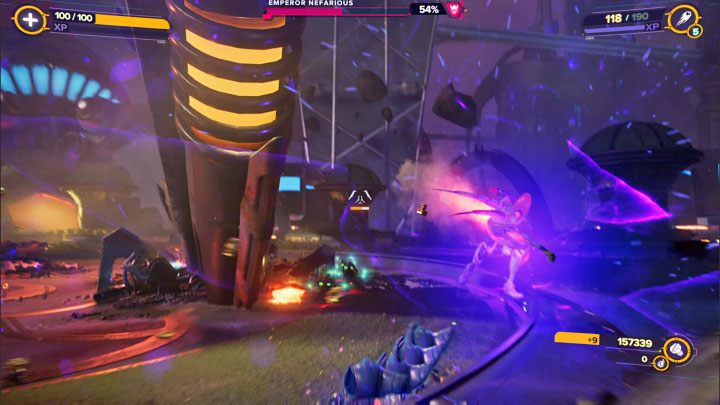 Emperor Nefarious, just like the Doctor, performs dangerous melee attacks after quickly approaching the hero. You must perform flawless dodges by using the Phantom Dash skill. It is worth noting that after a missed attack the boss will stay in the attack spot for a short while and this can be a good opportunity to strike him with short range weapons. 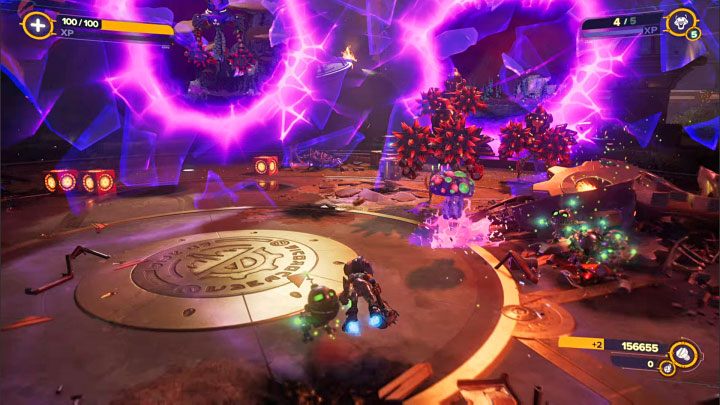 After the Emperor summons smaller monsters, respond by using the Bombardier, Mr. Fungi, and Glove of Doom gadgets. With summoned allies, you'll be able to worry less about common enemies and focus more on further weakening the main boss. 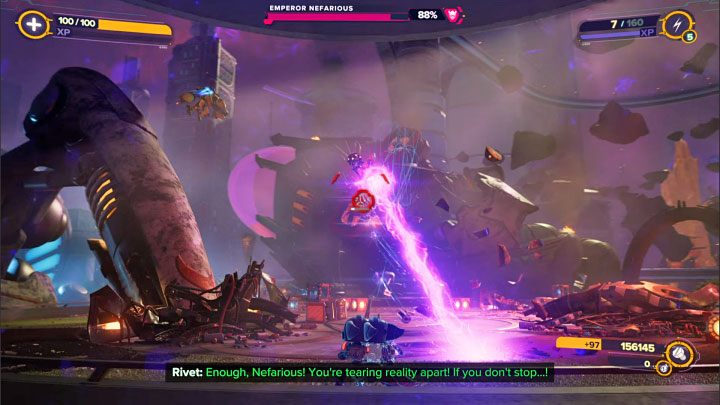 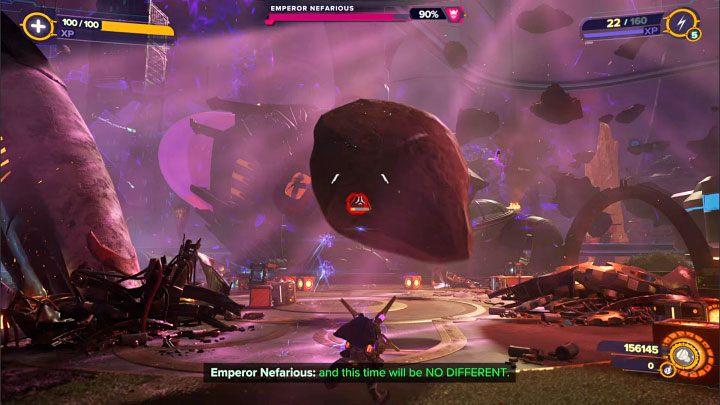 Emperor Nefarious can also use ranged attacks. You need to watch out for:

In both cases, use Phantom Dash and Hoverboot while running. 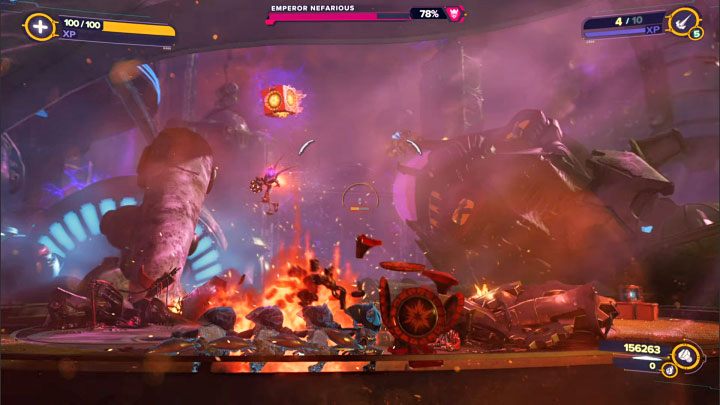 Nefarious may also occasionally pull explosive crates to himself in order to hurl them at you. You can use Phantom Dash or you can try to destroy the explosive crate before the boss makes a throw. 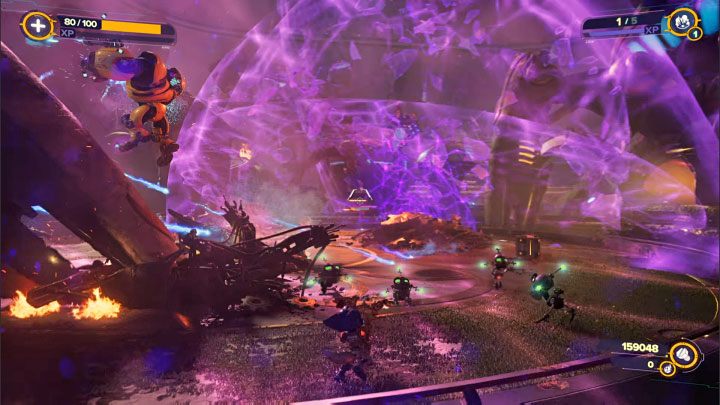 After Nefarious loses his entire health bar he will summon a large amount of reinforcements. This is the perfect time to take advantage of all the powerful area of effect weapons, as you will no longer need ammo for them. 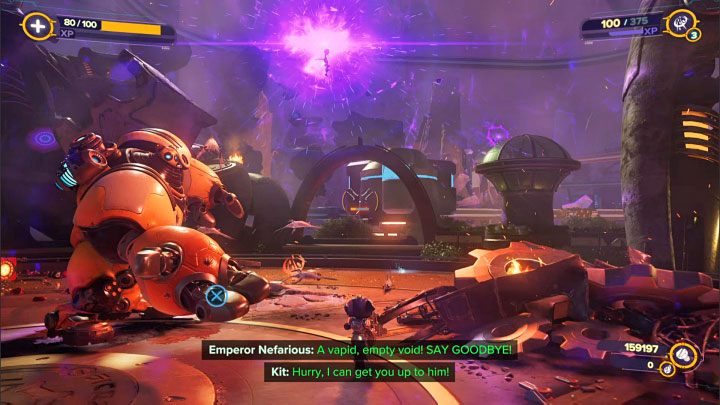 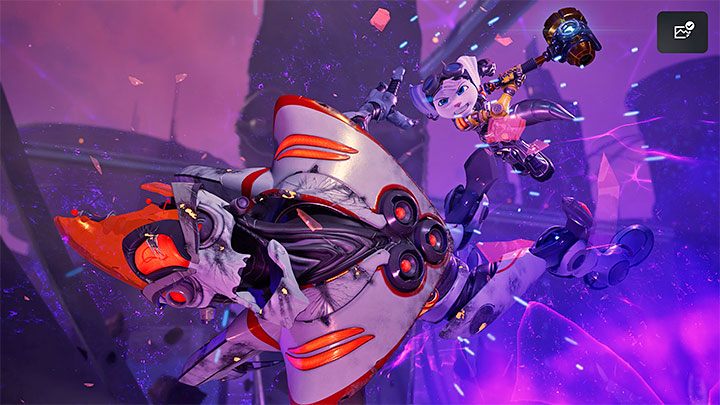 Look out for the moment when you can walk up to Kit and press X in order to be catapulted towards the boss. The only thing left for you to do is to watch the final videos.