Once you find the 3 bots for the main engineer from Blizar Prime as part of the main storyline, you will able to encounter the new anomaly requiring Clank to solve more puzzles.

You will have to return to the miners camp in the dimension before the catastrophe (on Blizar Prime, the blizons allow Kit to switch between two dimensions) and reach the northwestern part of the camp, where you will have to tackle 3 new logic puzzles as part of the mission objective to fix the anomaly. 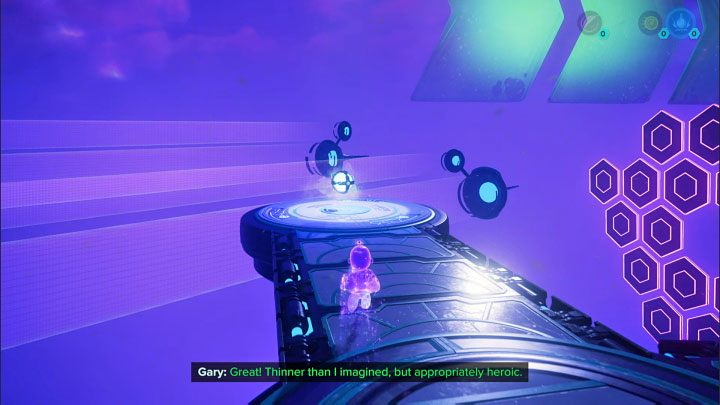 Once you start the puzzle, run all the way straight, then go to the left where you will find a Heavy Sphere. 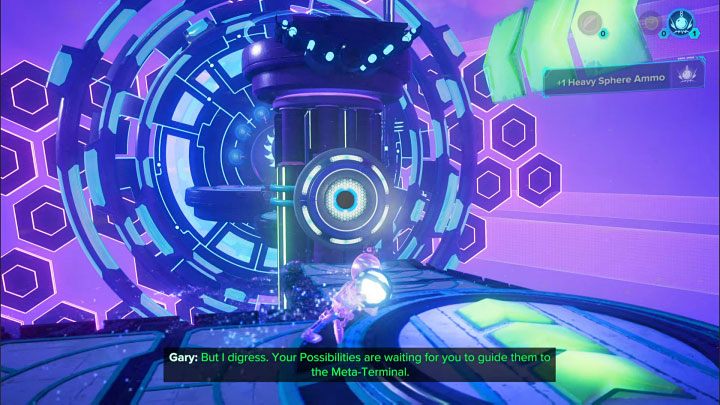 Use the heavy sphere immediately on the lift next to it - throw the sphere into the slot shown in the picture. 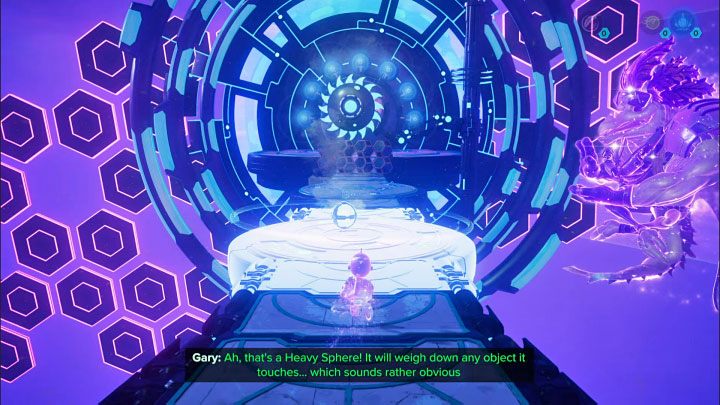 By lowering the lift, you will be able to take the other heavy sphere that was lying on top of it. 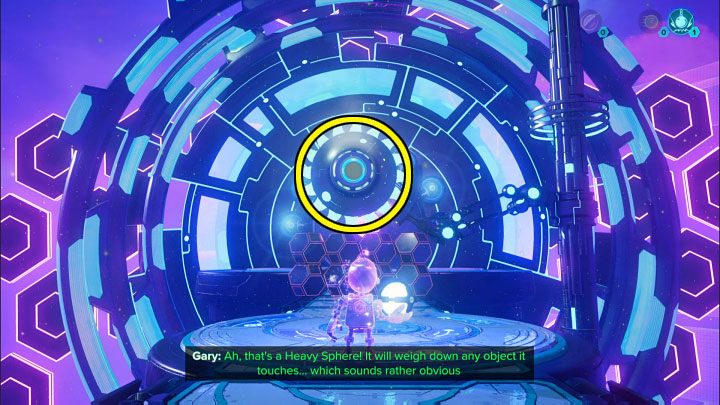 Stay in the area where you obtained the second heavy sphere and throw it at the top slot of the working fan marked in the picture. This will lower the fan and destroy the obstacles beneath it.

After doing this, remove the heavy sphere from the fan to return it to its original top position. 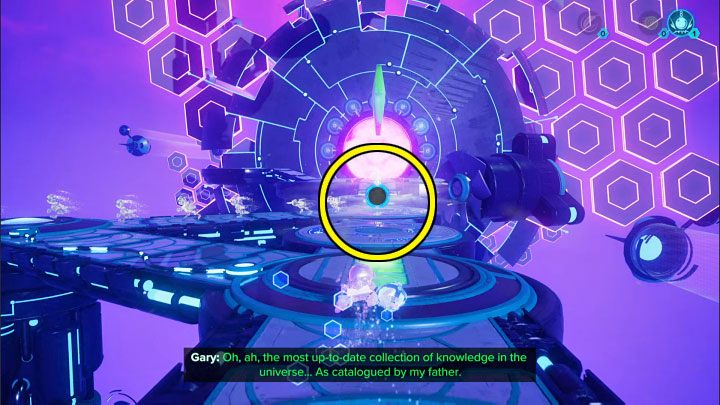 Return near the starting point with the second heavy sphere. Throw it into the slot marked on the picture, in front of the working fan. 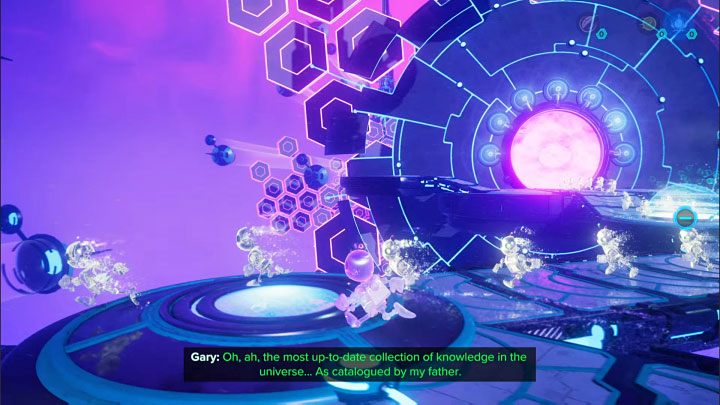 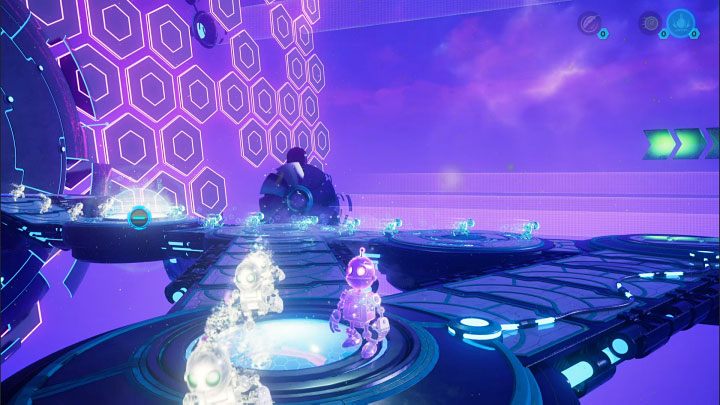 Now steer Clank to the pressure plate located on the left. By stepping on it, you can change the direction of the projections. The placement of the heavy sphere allows the projections to run past the moving fan without further issues. 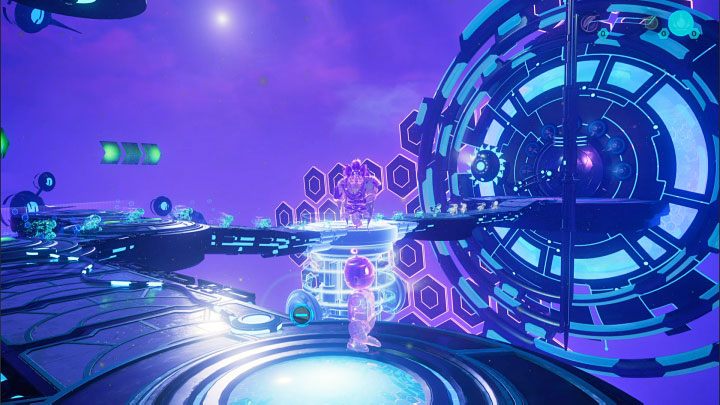 Now you just have to wait until enough projections reach the meta-terminal and unlock the exit. You can teleport to it. 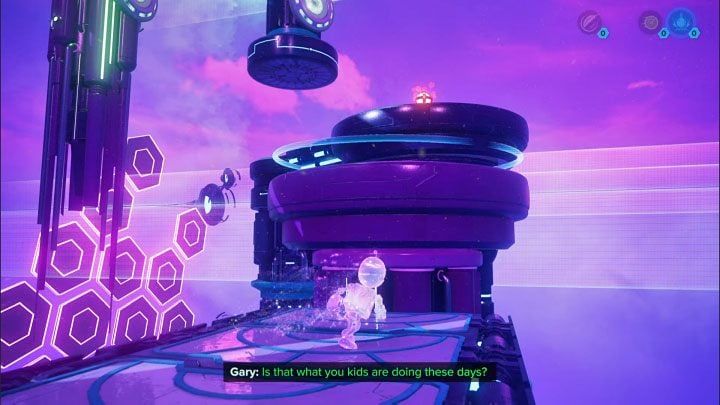 Run straight and turn right at the first opportunity. The working machine pictured above is located here. Jump on it when it gets low enough. On the adjacent, circular platform, you will find the Lift Sphere. 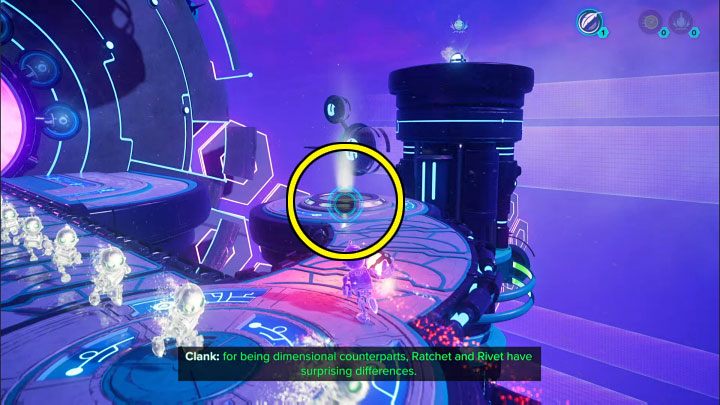 Bring the lift sphere near the starting point. This time, head to the left and throw the lift sphere into the slot marked on the picture. Catapult Clank to the top platform to obtain a Heavy Sphere. 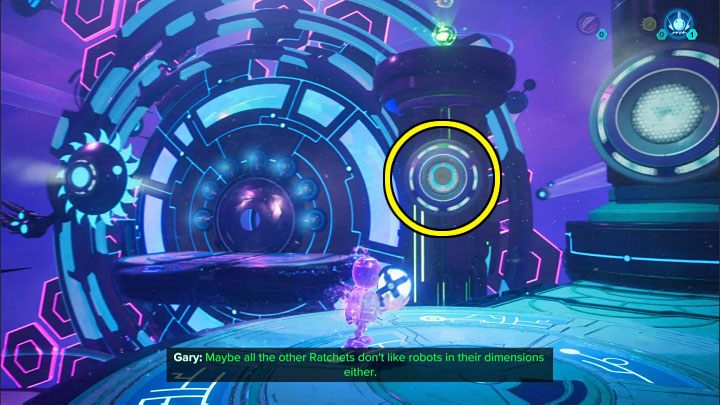 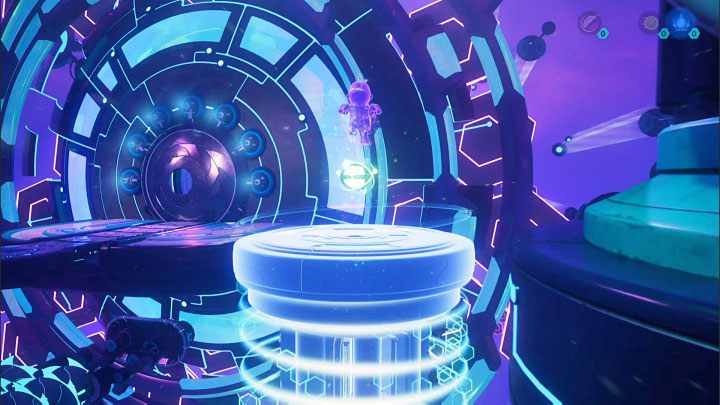 With the heavy sphere, return to the area where you found the lift sphere earlier. Throw the heavy sphere at the remote slot of the working machine with the green sphere, which is marked on picture no. 1. Make a double jump towards the lowered platform to acquire a Speed Sphere. 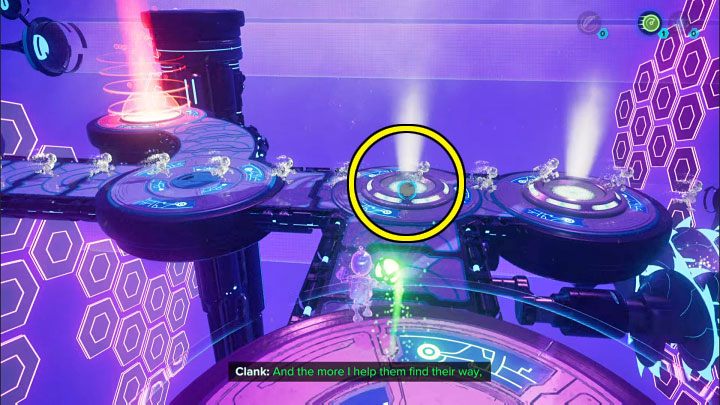 Return with the speed sphere to the main path taken by the projections and throw the sphere in the slot marked on the image. 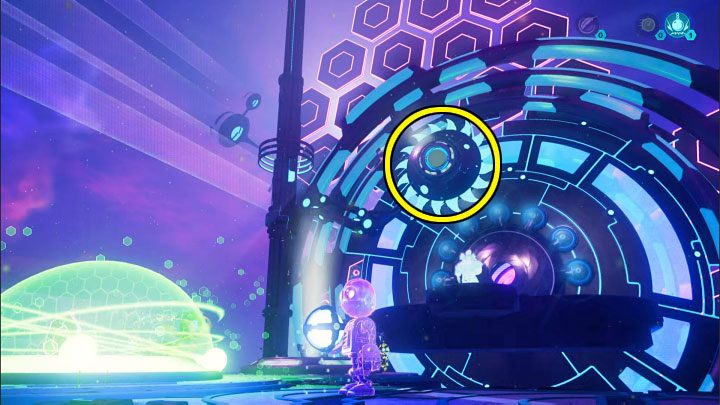 Remove the heavy sphere from the machine on the right (you can do this from a distance) and throw it at the fan marked on the picture, located directly in front of the meta-terminal. This will lower it. 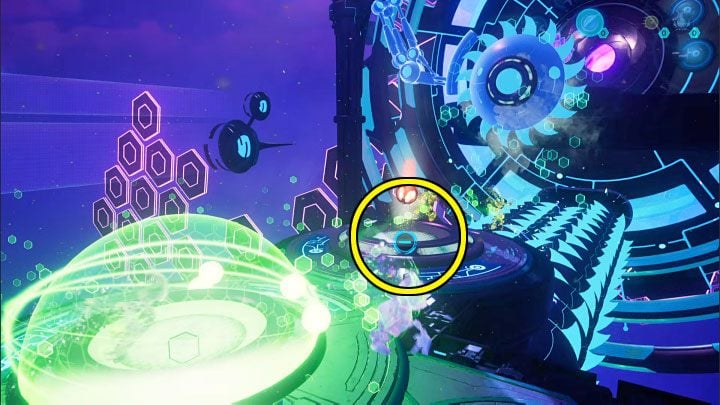 Return to the left path, pull the lift sphere towards you and place it in the slot in the image above. 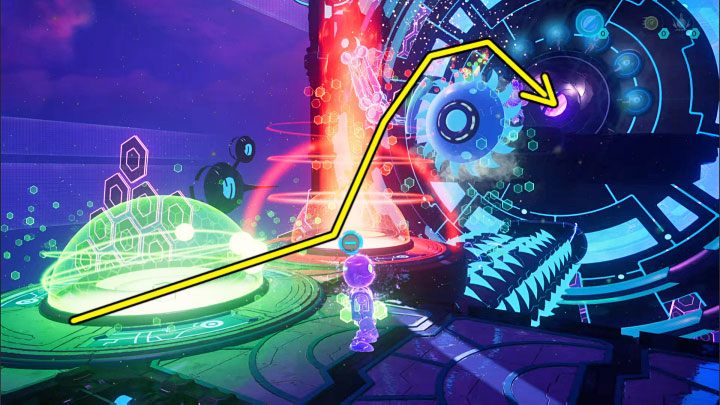 If you have followed all the steps correctly, the projections should:

After unlocking the exit, teleport to it to proceed to the final puzzle. 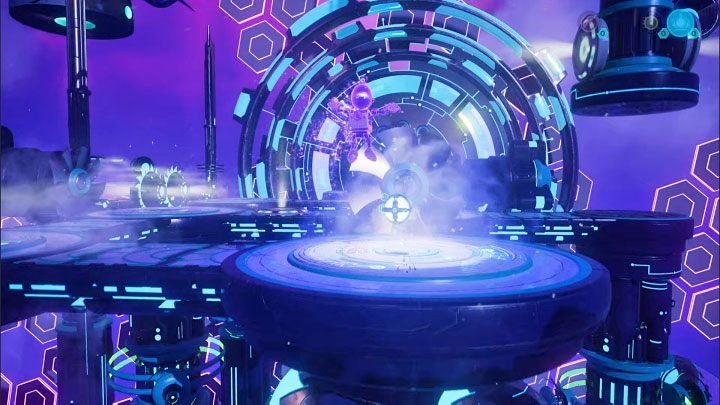 Head forward and jump to the circular platform with the Heavy Sphere. 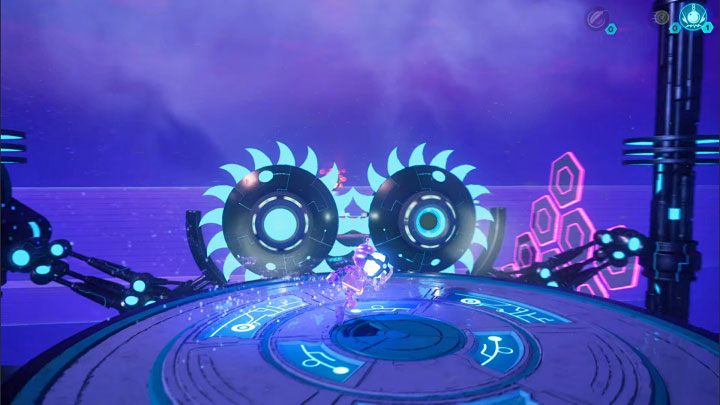 Grab the heavy sphere and go straight ahead and then to the left. At the location pictured above, use the sphere on one of the slots to lower the two working fans. This will allow you to jump to the shelf behind the fans where the Lift Sphere is. 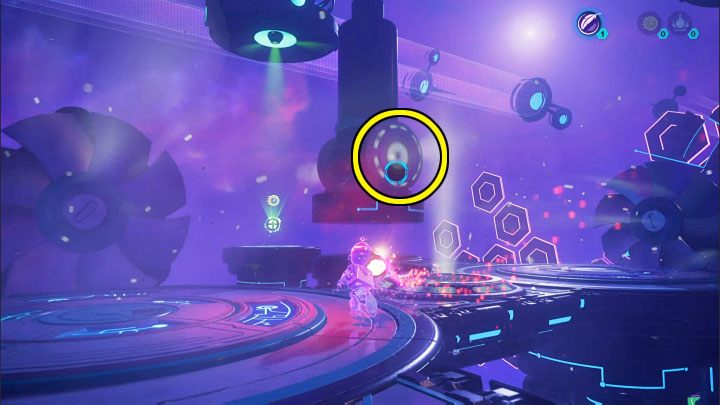 With the lift sphere, head to the opposite end of the area and throw it into the slot of the working machine from the picture to make it stay in the top position and stop crushing the path. This action will earn you the Speed Sphere. 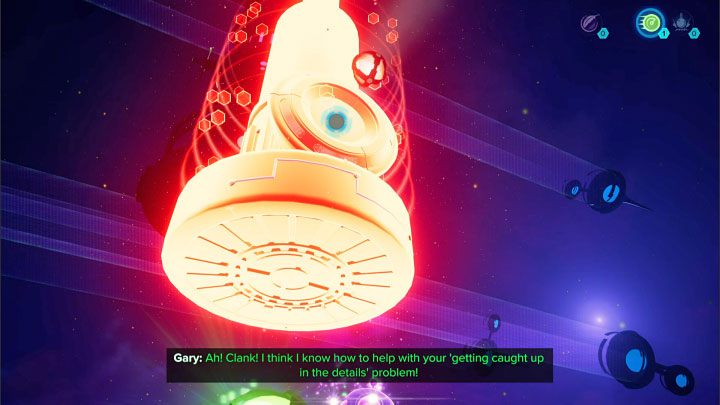 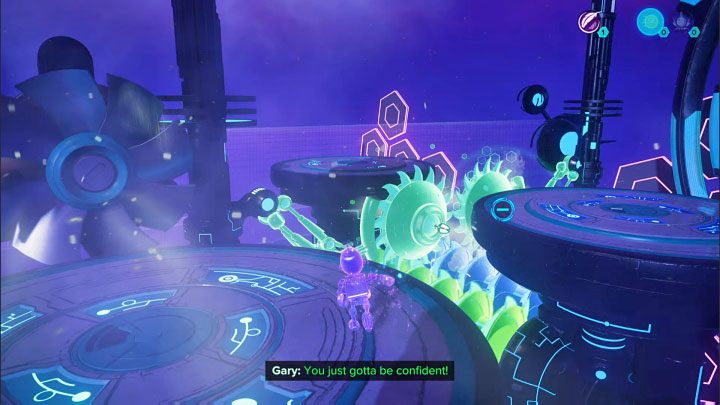 Grab the speed sphere and return to the central part of the location, then take the previous two spheres out of the slots you placed them in earlier, that is:

You should end up with 3 spheres in your inventory - one sphere each of speed, lift and heavy. 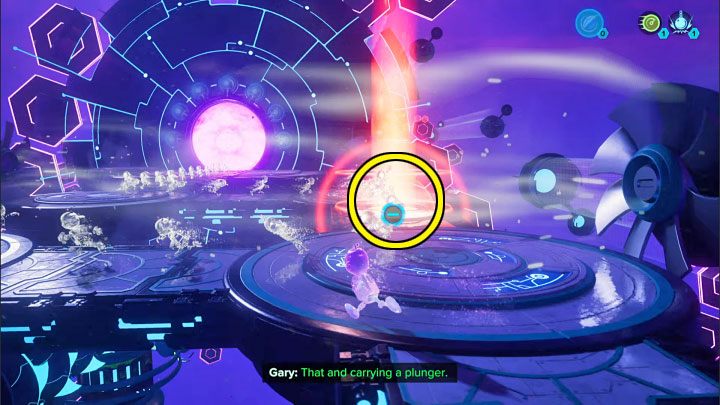 Set off towards the starting point and place the lift sphere in the slot marked in the picture, i.e. where the projections are running though. This will allow them to jump over the working fan. 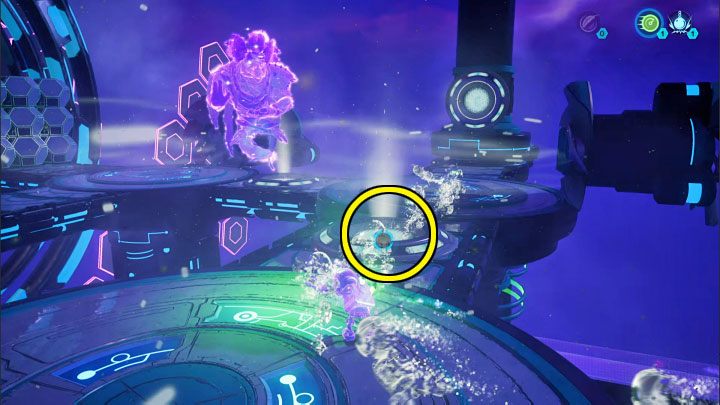 Go a bit further along the projection path and place the speed sphere in the slot from the picture - it is located between one of the fans and the crusher. 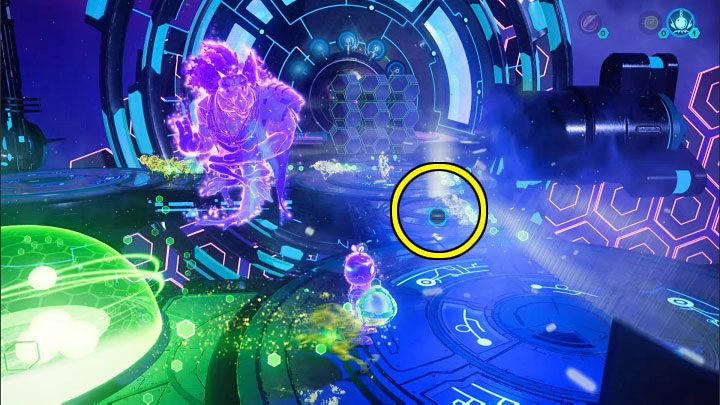 Finally, place the heavy sphere in the slot nearby that is shown in the picture. 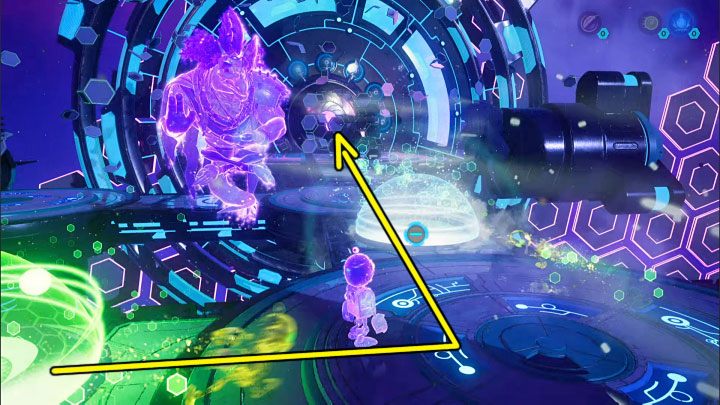 Once all the spheres are placed correctly, the clones will smash the wall blocking the path leading to the meta-terminal and then they will unlock the exit after hitting it for a while.