On this page of the Ratchet & Clank Rift Apart game guide, you will learn how to solve all 3 of Clank's puzzles on planet Sargasso - the first of four locations containing puzzles. You will learn how to manipulate spheres during the puzzles on Sargasso and how to lead the other Clanks to the meta-terminal. This will allow you to resume your main missions on planet Sargasso.

Starting point of the puzzles on Sargasso and basic info 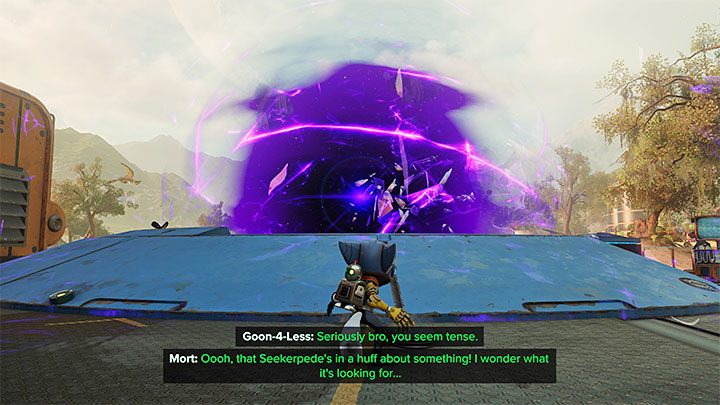 During the game, there will be four situations when you will need to solve logic puzzles. All of the four puzzles are quite similar, although their level of difficulty will gradually increase.

The first series of puzzles occurs on planet Sargasso, which you will initially visit early in the campaign. Reach the gelatonium factory and, after your encounter with Mort, investigate the dimensional anomaly shown in the picture. Once you interact with it, you will hear back from Clank, who will want to investigate it further. 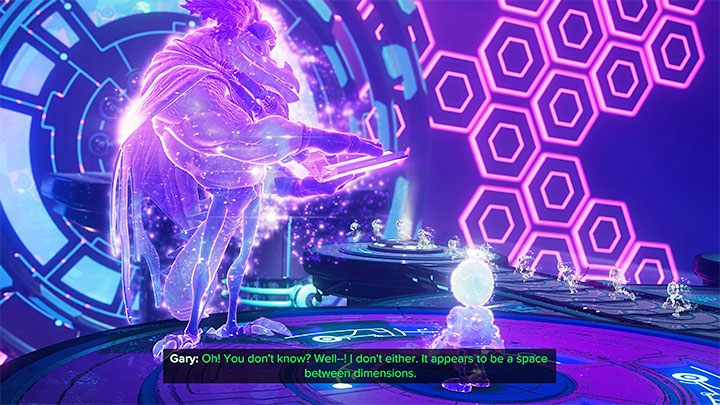 This will be the first time Clank is transported to interdimensional space- a safe place where you will meet Gary. Your task will be to solve logic puzzles that require you to lead Clank's "projections" / Possibilities to the meta-terminal, a portal-shaped object at the very end of each area. Once enough projections hit the meta-terminal, the exit will unlock. Each time, you will need to solve three of these puzzles.

You won't encounter any enemies in the puzzle locations. Moreover, even if you fall into the abyss, the riddle will not be restarted, but you will resume the struggle not far from where you fell.

Clank will use Orbs with different actions to solve the riddles. You need to find the spheres, which you can then store in your inventory to carry more than 1 at a time. You can freely select the gathered spheres from the drop-down menu (by holding down the Triangle button).

You can throw the spheres at different interactive slots and the end result will depend on the type of sphere used and the object/device it was attached to. Spheres can also be easily removed from slots (even at range) to be used in other places. 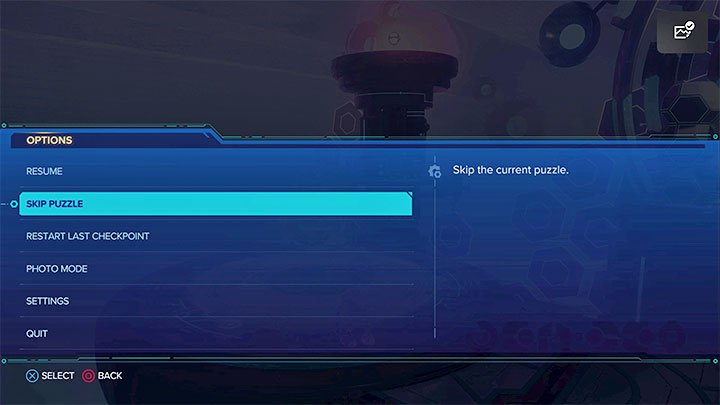 It is worth noting that the game allows you to skip Clank's logic puzzles from the pause menu. However, we don't recommend doing this, especially during the first set of puzzles on Sargasso, which is simple. 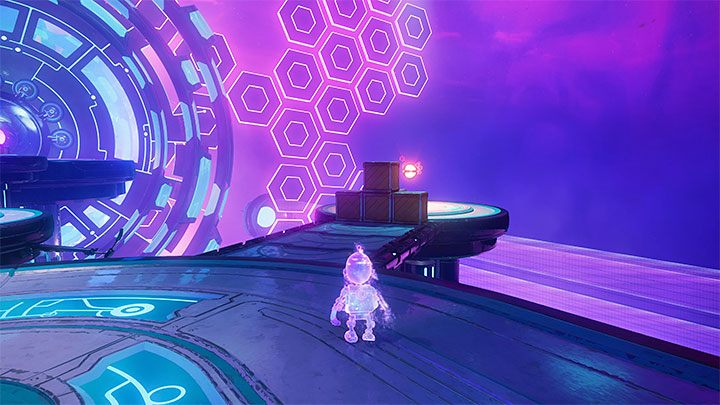 Start by destroying the crates, behind which you will find the Lift Sphere. 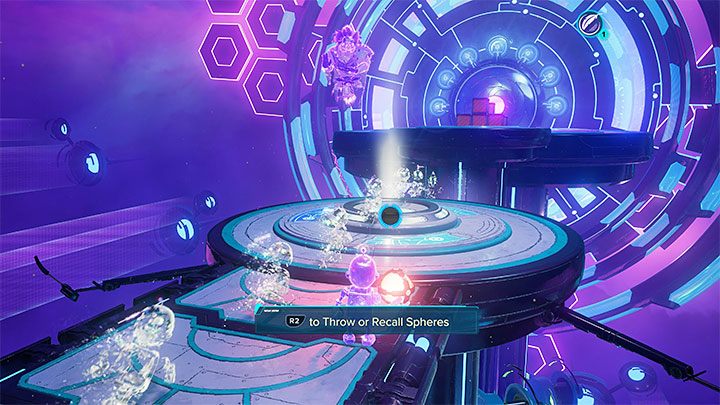 With the sphere, reach the place shown in the picture. Throw it into the hole in the floor, then run on that spot to catapult Clank and land above. 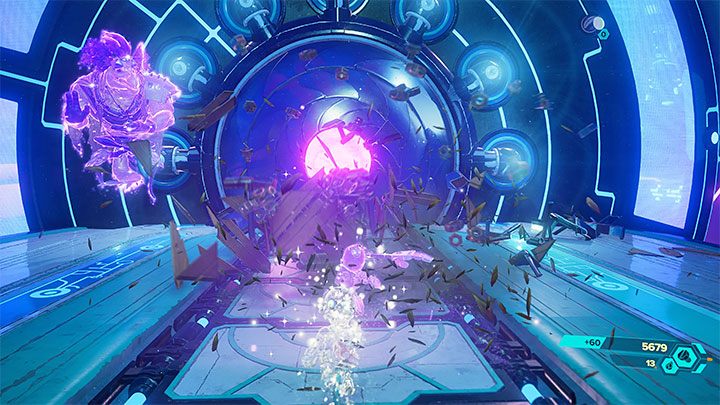 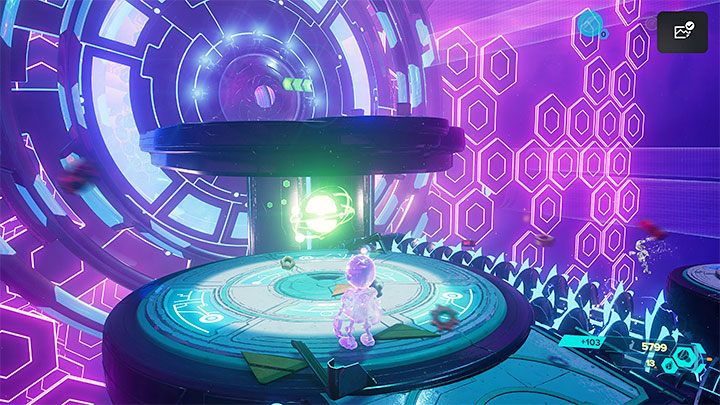 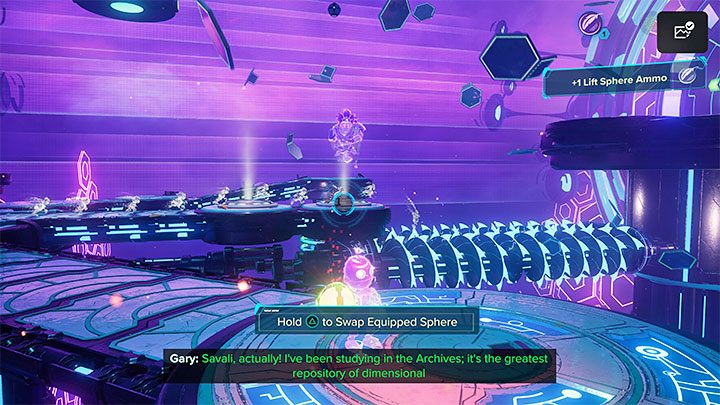 Start by getting two spheres: 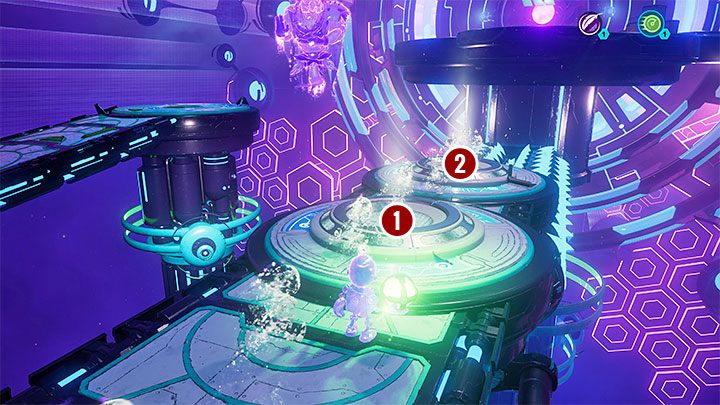 Take the speed sphere back and with both spheres reach the spot in the screenshot where the projections are running: 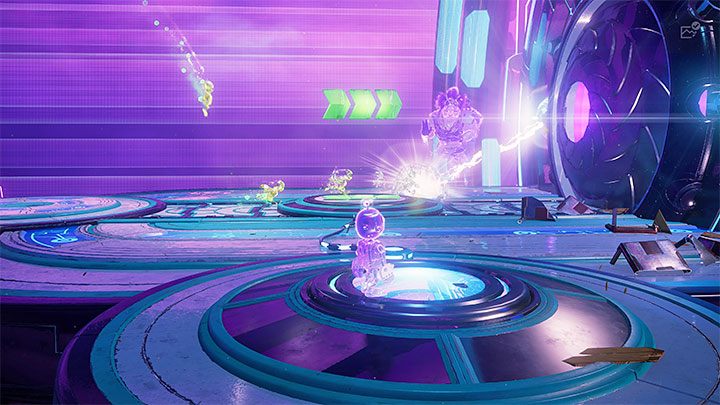 Catapult Clank to the top. Once you are on the upper level, step on the pressure plate to the right to change the direction in which the projections are running. After a short while they will smash the exit, and you will complete the second puzzle. 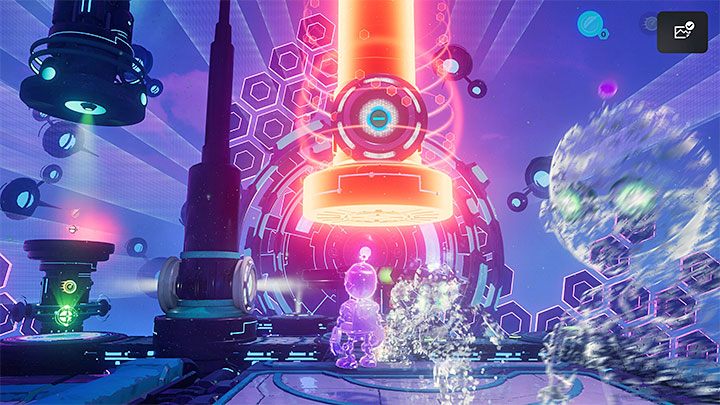 Start by taking the lift sphere located on the right side. Use the sphere on the first working mechanism to make it rise and lock it in place.

After running under the locked mechanism, turn towards it and pick up the lift sphere, as you will need it elsewhere. 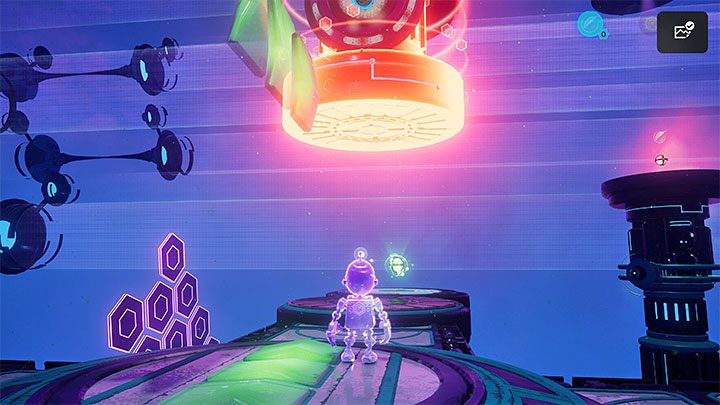 Take the lift sphere to the working machine on the left in the above picture. Block this machine with the sphere and you will gain access to a circular platform with a speed sphere. 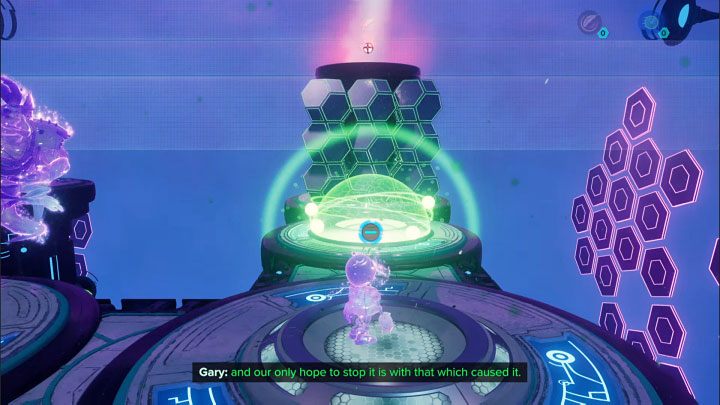 Reach the barricade shown in the picture and place the speed sphere in the slot just in front of it. Run through the sphere to break the obstacles. 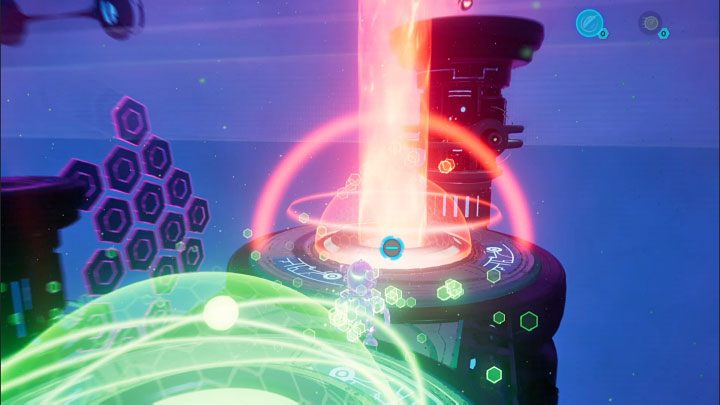 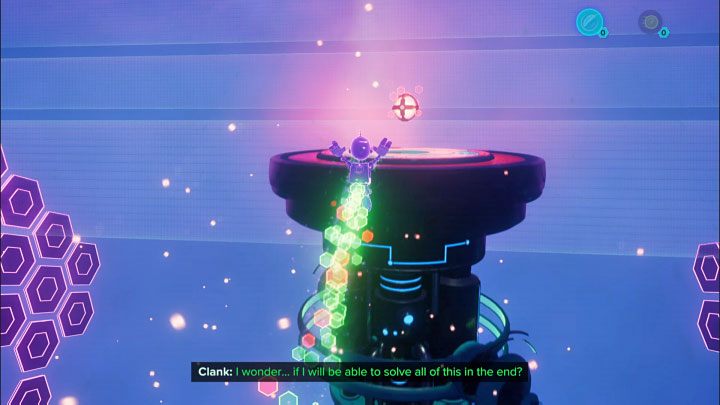 Go back to where you used the lift sphere. Pull it towards you and bring it to the recently broken barricade. Throw the lift sphere in the no. 1 slot shown in the image. Use both spheres (speed and lift) to catapult Clank and fly him to the shelf shown in picture no. 2 with the second lift sphere. Pick it up. 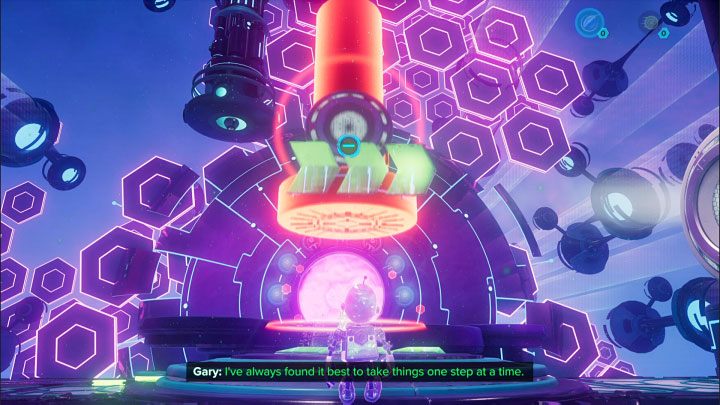 Return to the bottom and remove the spheres from the slots. You should have 3 spheres in your inventory at this point - 2 lift spheres and 1 speed sphere.

Use the first lift sphere to stop the machine blocking from the path of the projections from the starting point. 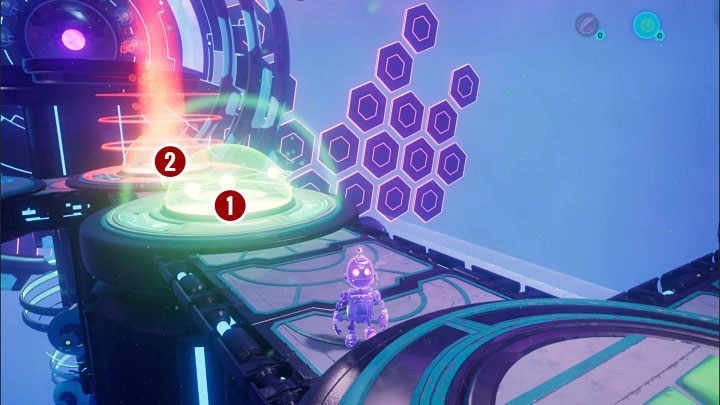 Place the other two spheres further down the main path: 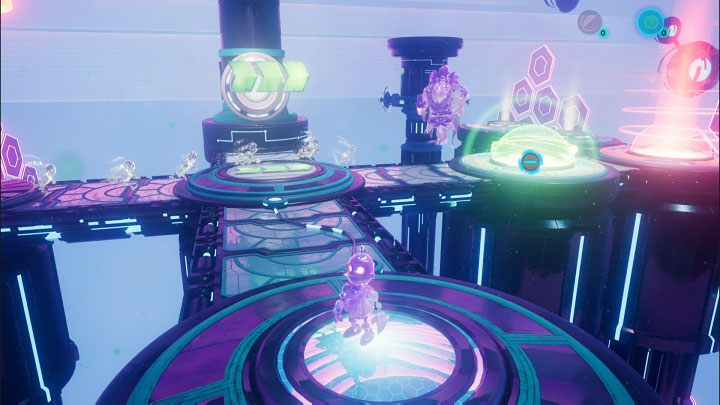 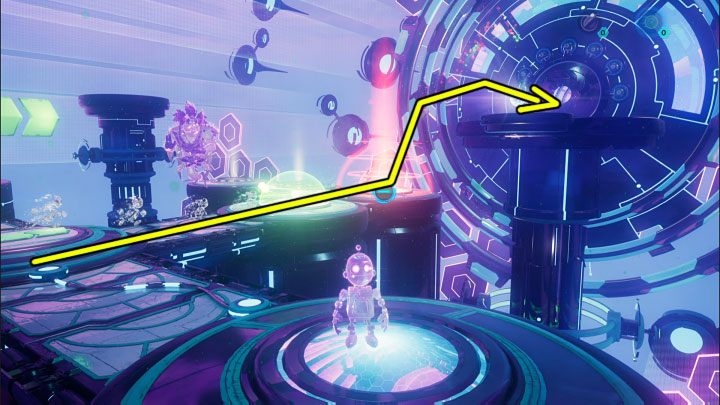 Reach the side pressure plate shown in picture no. 1 to cause the projections to start running straight ahead. They should be accelerated by the speed sphere and catapulted by the lift sphere.

Teleport Clank to the upper level and wait until the last meta-terminal is smashed.