This page of the Ratchet & Clank Rift Apart game guide covers the second part of the Nefarious City exploration walkthrough. You will learn where Club Nefarious is located, how to get to there, and how to catch up with a character called the Phantom.

Find the Phantom at Club Nefarious 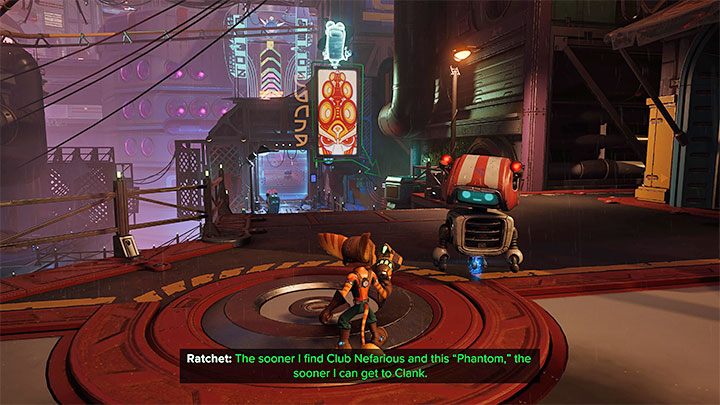 You will learn about the need to visit the Nefarious Club from Mrs. Zurkon, whom Ratchet meets at the marketplace. You can go search for the club before or after the optional factory visit. You must start by reaching the east exit of the marketplace. The hero will encounter an active energy barrier at this location. It is not possible to cross these barriers, until you unlock Phantom Dash (described below). 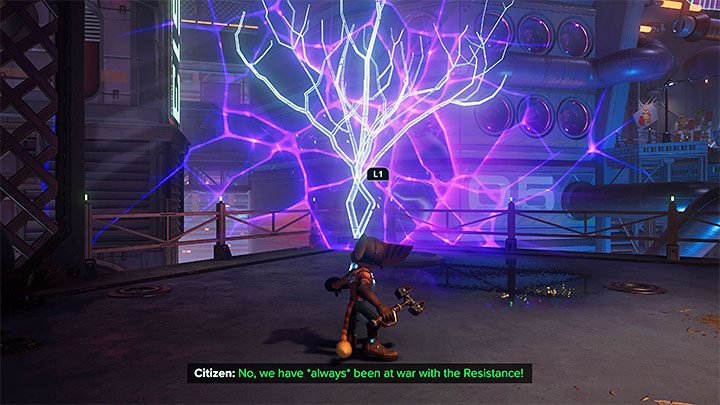 We propose to first explore the northern pathway. This will allow you to find the first Dimensional Pocket. These are places where you can open rifts and move into other dimensions. Use the L1 button to open the pocket.

Each location behind the dimensional pocket is small and should be thought of as an obstacle course of sorts. In this particular case, pocket exploration is very simple and involves bouncing off large balloons. Carefully make further jumps, helping yourself with a double jump if necessary. You will meet enemies along the way, but you can easily get rid of them by firing from a long distance 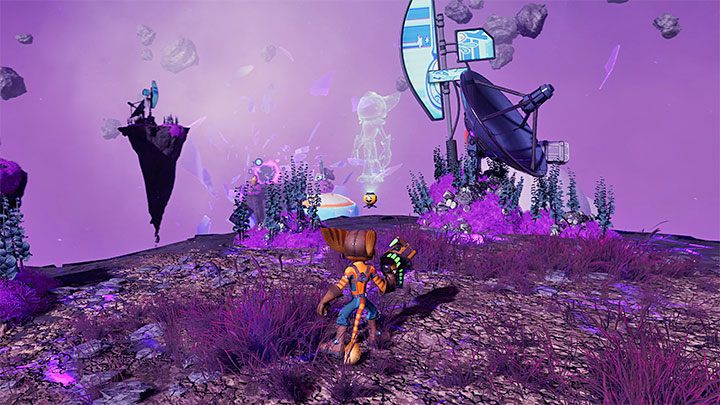 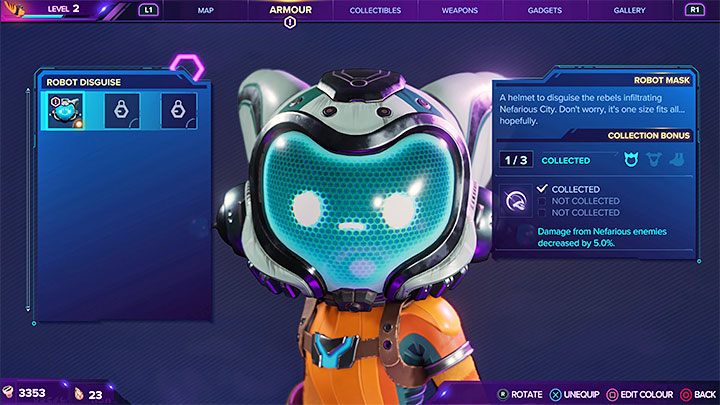 At the very end of the path you will find a unique secret - a Robot Disguise Helmet. Every found piece of armor automatically adds a permanent bonus to your stats - you don't have to wear armor to get the bonus. In this particular case, the bonus will be the weakening of attacks made by enemies subordinate to Nefarious. The difference is not large (-5%), but finding other pieces of armor from the same set later in the game can increase the difference.

Return to the dimensional pocket exit to resume exploration of Nefarious City. Rifts are always helpful in getting to the exit faster. 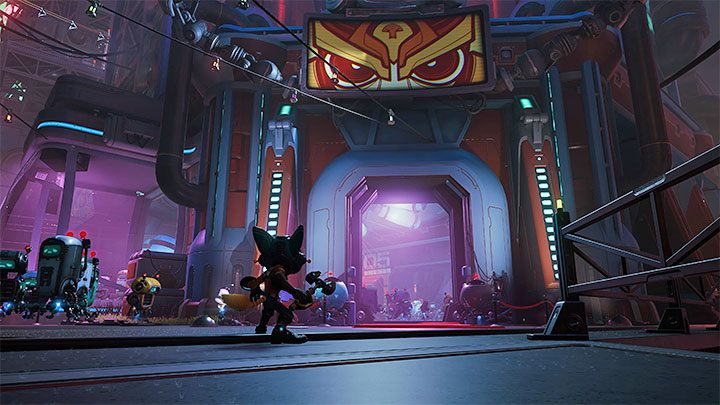 Return to the energy barrier and this time head south. You will reach the entrance to Club Nefarious fairly quickly. You can use it right away (Ratchet won't be stopped by bouncers) or look around the club first.

Inside, start squeezing through the crowd. You will see the cutscene with the protagonist noticng the Phantom, who then escapes. 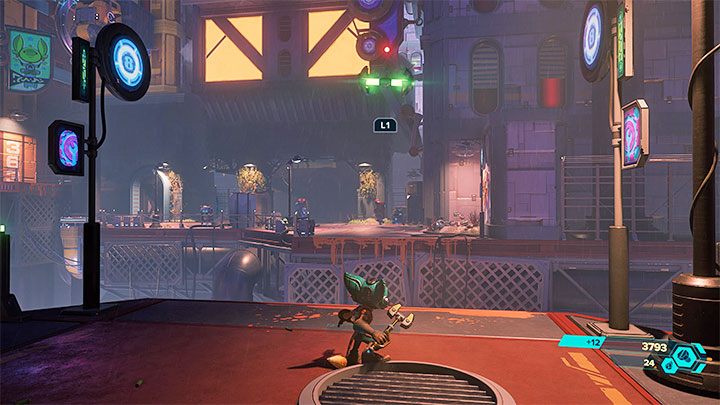 You must start by defeating a group of robots that have appeared inside the club. The club's guests will thankfully not interfere with this.

After clearing the area, use the new clubhouse exit. You don't have to be afraid that the Phantom will escape you. While following the fleeing character, you can engage in optional exploration of the area. In order to bypass the small chasm, you have to grab onto the hitch and rock extra - hold down L1 instead of a single button press. 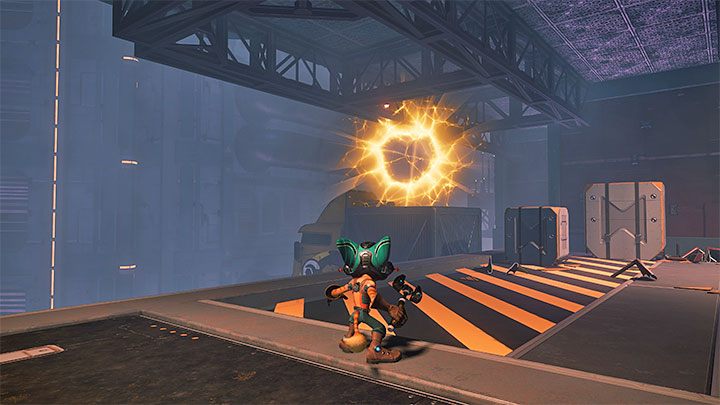 Bounce off the levitating platform and be ready to deal with a group of enemies in the next location. You can attack enemies from a long distance by shooting from a higher range, although this is not mandatory.

After the fight, jump down and explore the area on the right (this is optionally). At the place in the screenshot, the hero can pull himself to the first rift. Once you reach the container, you will notice a second rift, which in turn will lead you to a gold bolt. 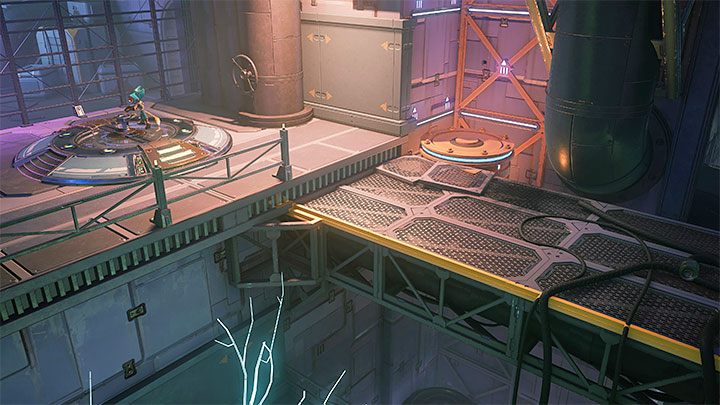 Return to the place where you fought your last battle. In order to continue, you must reach new vertical walls for bouncing. Get to the next level with them.

At the top you will find an interactive crank mechanism . Interacting with it will lead to the activation of a platform on the right, from which you can jump up. There are new bounce walls above this platform. 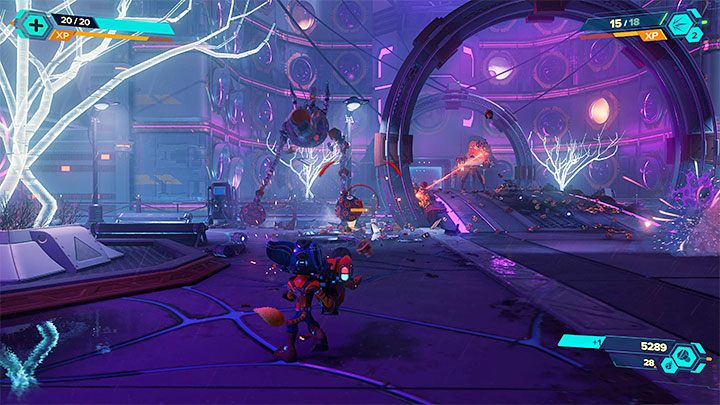 After completing the climb, you will find yourself on the other side of the energy barrier you encountered earlier. Collect loot, jump down to the main path and head east. Enemy machines will appear in the new larger area. Take advantage of the fact that there are lots of explosive boxes in the area.

After winning the battle, walk a bit east to meet the Phantom. With this encounter, the Phantom Dash ability will be unlocked. Its two main uses are described on the next page of the guide.