This page of the Ratchet & Clank Rift Apart game guide covers the first part of the Nefarious City exploration walkthrough. You will learn what attractions await at the marketplace, how to get to the factory, and how to complete the optional mission objective to explore the factory. 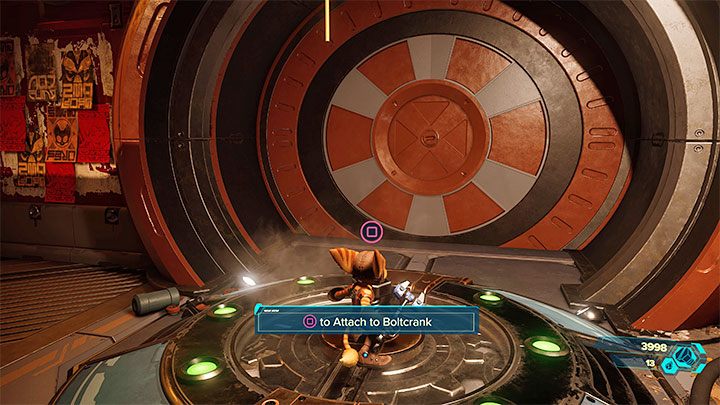 You will start in one of the side alleys of the futuristic metropolis Nefarious City. Start exploring the area and reach the place where you can use the elevator. Locate where to use the boltcrank - you must hold the Square key and use the left analog knob to unlock the passage. 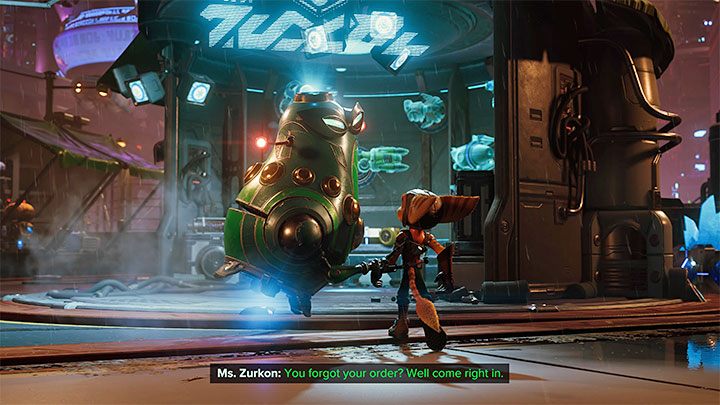 You will reach the vicinity of a large marketplace - jump and glide towards it. Reach Mrs. Zurkon's stall and talk to her.

Leave the full exploration of the Nefarious City map for later. It's best to deal with it only after you get the Phantom Dash - this ability will help Ratchet reach some previously inaccessible areas. Apart from that, we recommend taking a look at the Secrets and Collectibles chapter of our guide, where you can find detailed information about where to find unique treasures in the city. 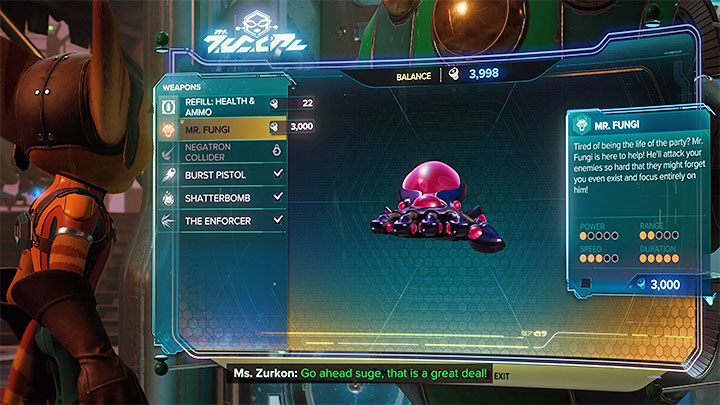 You will learn from Ms. Zurkon about the need to visit the Nefarious Club. You can go there right away (go to the next page of the walkthrough description) or first tackle the optional objective described below, revolving around investigating the factory.

Ms. Zurkon has a new gadget for sale - Mr. Mushroom. You can purchase it for 3000 bolts (now or later). This weapon allows you to summon the titular character for help. Mr. Mushroom can assist the hero in attacking enemies. This is a useful gadget because the helper works completely independently and does not need to be controlled.

Note - Investigating the factory is an optional mission objective. If you'd rather focus on the main story right away, then go to the next page of the walkthrough - Visiting the Nefarious Club. 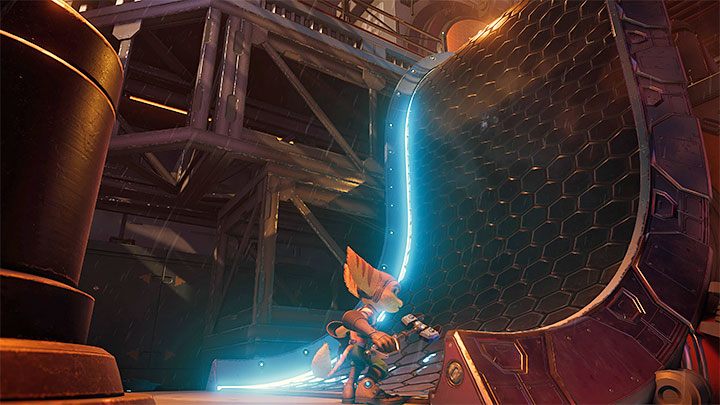 You can investigate the factory as soon as you arrive at the marketplace for the first time. Walk around the market to collect raritarium (the one behind the security barrier is temporarily inaccessible) and locate the magnetic path shown in the screenshot. Use Magneboots to get to the upper balconies. 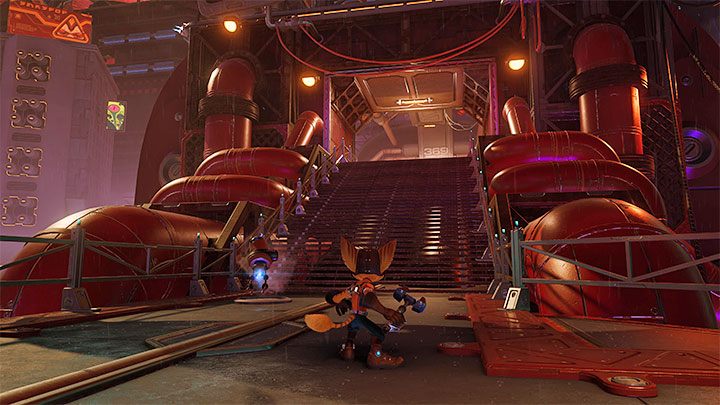 A linear path will lead you to the factory entrance. It consists of several large areas that you will be able to explore one at a time.

In the first area of the factory, Ratchet will be attacked by several hostile robots. Deal with them without worrying about the surrounding NPCs, who will not be harmed. 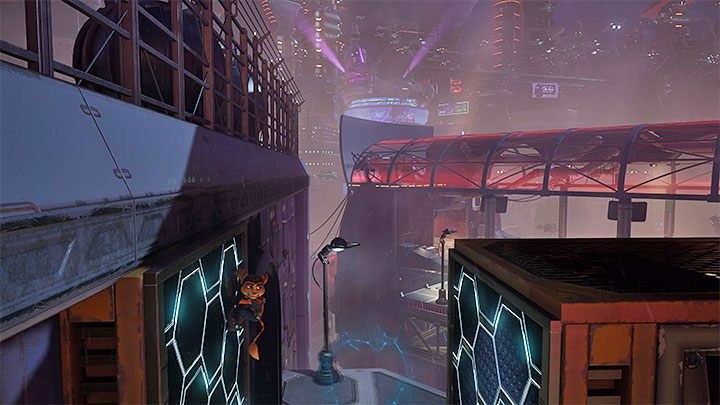 After the fight, look around for a rift to pull yourself to. You will reach the walls you can jump from for the first time. It's very simple - press X at the right moment for the hero to bounce off the wall. Reach the very top this way.

You will find yourself close enough to the new rift to pull yourself towards it. On the new ledge, you will find a place to use the crank - this will unlock the entrance to the first large hall of the factory. 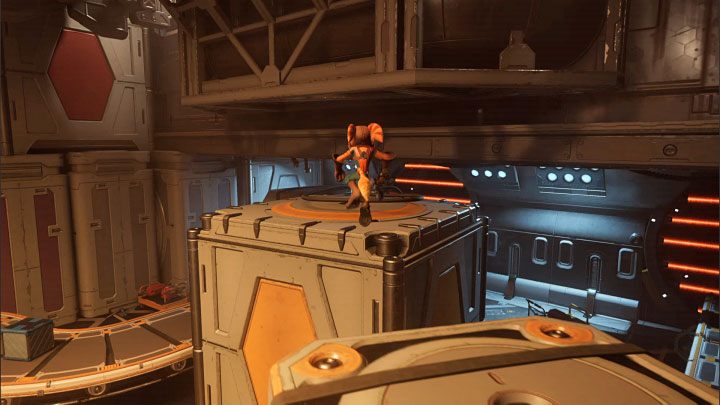 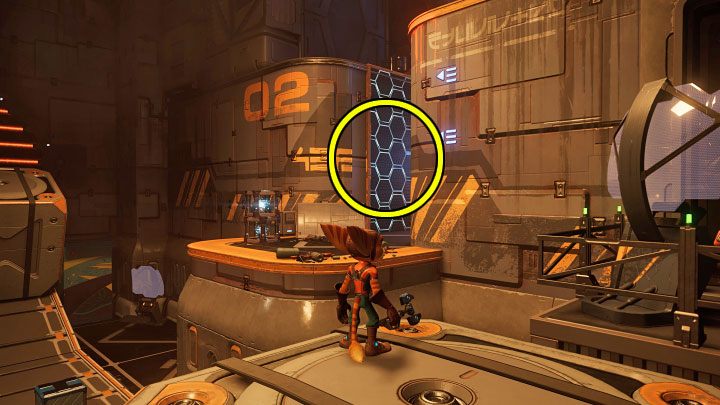 In the first hall, your task is to reach the vertical bounce walls visible in the distance. Take advantage of the conveyor belts and large boxes that travel on them. Be careful not to bump into any of the barriers with red lasers though, as this would lead to losing Ratchet.

Initially, head to the right and reach the stationary container shown in screenshot 1. You will be able to jump over to one of the crates from the other conveyor belt and with its help, reach near the bounce walls. 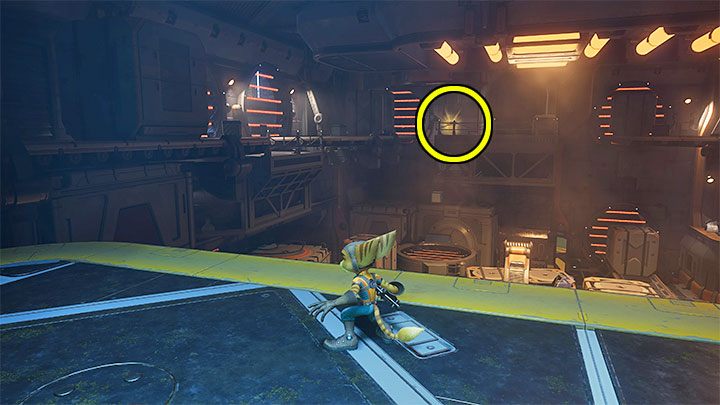 Bounce off the walls to reach the upper level of the hall. In the distance you can see the first gold bolt that can be picked up. If you want to get your hands on it, you can run down the new conveyor belt, avoiding the big boxes along the way.

To continue through the warehouse, use the south passage near where you bounced off the walls. 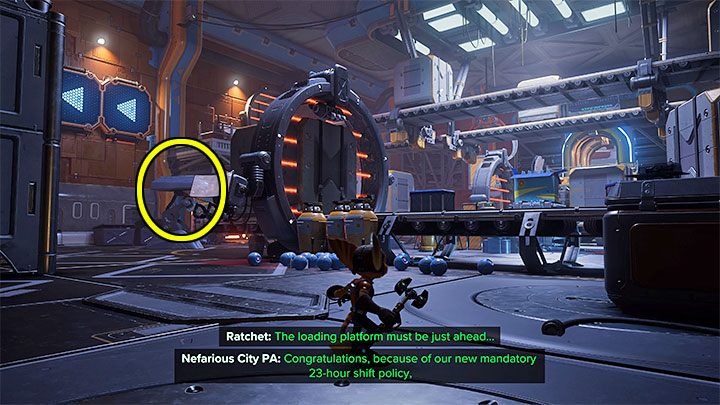 Soon you will reach the second large hall of the factory. As before, your first task will be to get to the upper level of this location. You must climb at the place marked in the screenshot, that is, to the left of the starting point and to the left of the transmission belt.

Note the location of the wall with arrows. It's worth revisiting here after unlocking Phantom Dash. Reaching the ledge in the corner of the hall will allow you to get a large supply of raritanium. 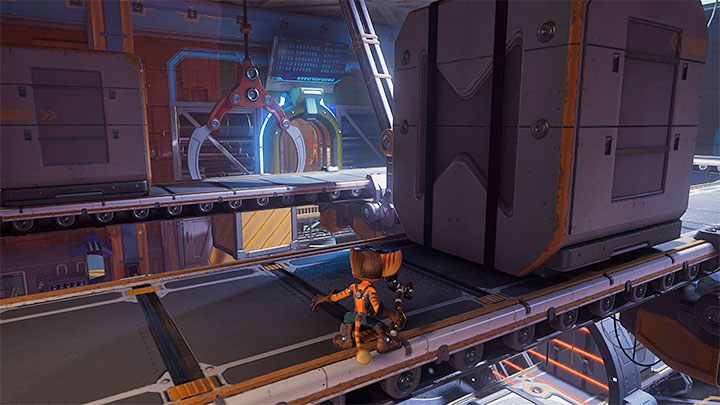 Head north and use the conveyor belts operating on the upper level, though be careful not to let the hero get pushed down. Next, defeat new robots.

You will reach the Shipping Depot. More battles will begin here. Watch out for enemies that can attack from long distances. It's worth to eliminate them first. 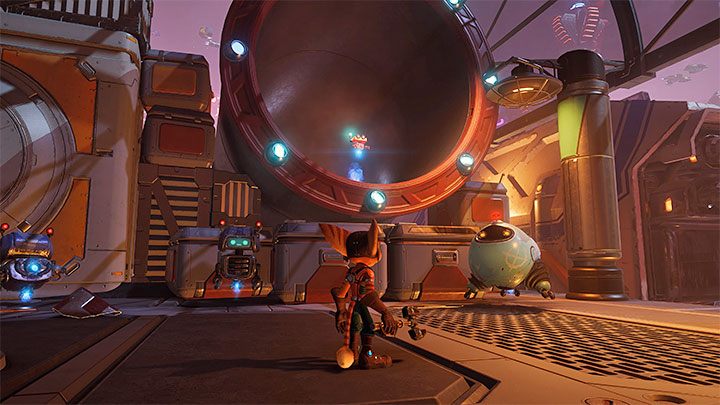 Continue through the warehouse and fight next battles. In this case, watch out mainly for turrets that shoot lasers. Get rid of them first. Also, don't let enemy Sluggers get close to Ratchet, and attack them from a distance.

The reward for going through the entire warehouse is finding a Spybot - is one of the collectibles in this mission. Next, the hero will automatically use the tunnel and after going down you will return to the market area.