On this page of the guide, you will find a walkthrough of the prologue of Ratchet & Clank Rift Apart. You will learn how to perform all the required actions during the parade on Corson V, as well as how to reach Doctor Nefarious and his thugs.

Travel to the front of the parade 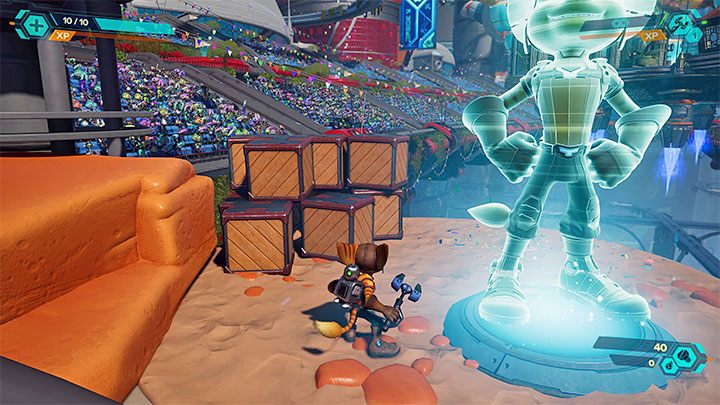 You play the prologue as Ratchet. He is accompanied by Clank. Reach the area where you can pick up a wrench - this is Ratchet's primary melee weapon.

Stand on the small platform - you will be transported to a new location. Use your melee weapon to destroy crates - they can contain Bolts (local currency), but later in the game, you will also gain health and ammunition this way. You can use the wrench on the cannons to fire confetti. 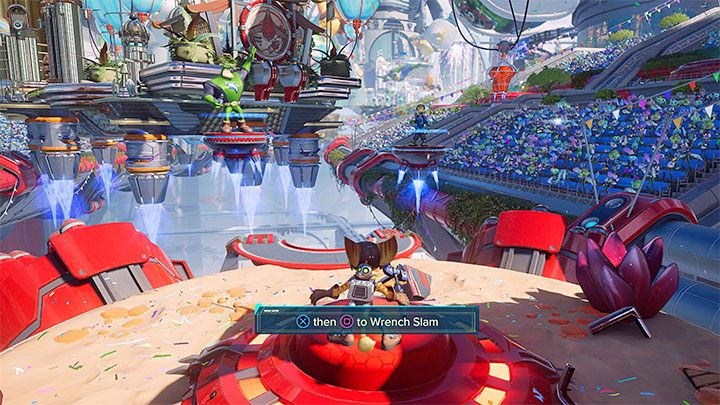 Keep following the linear path. Use double jump to reach higher ledges - press X again when you are in the air.

When you reach the pressure plate, perform a Melee Slam - jump up (when standing still) and press Square while in the air to use your melee weapon. With this attack, you can, e.g. destroy groups of crates faster or defeat weaker opponents. 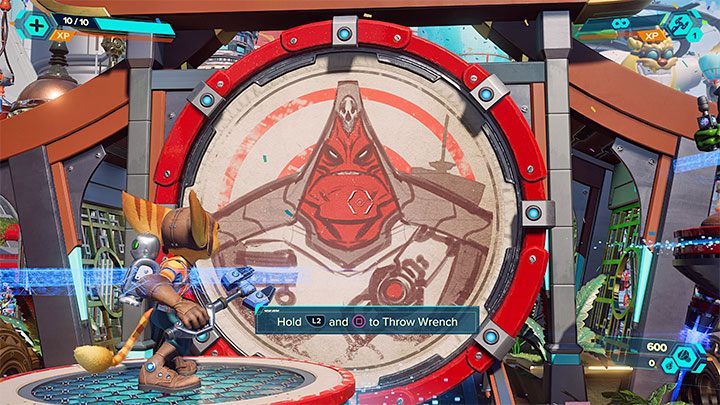 Stand on the next circular platform. After completing the ride, you must throw the melee weapon at the large shield - hold down the aim button (L2) and press Square while aiming at the shield. This action can come in handy in later stages - you can attack enemies or smash interactive objects from a distance. 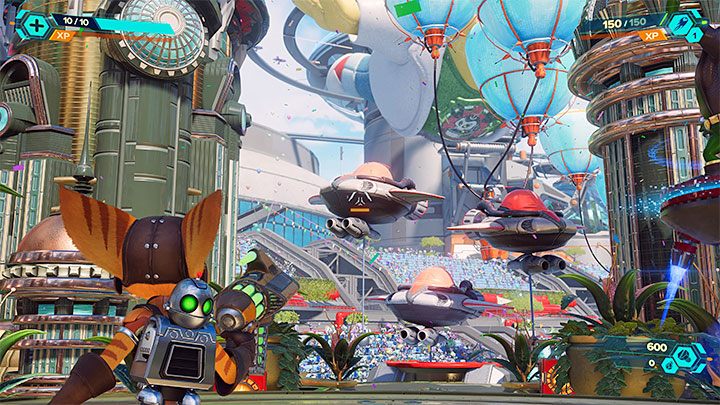 In the next location, you will find your first firearm - Burst Pistol. This weapon resembles a submachine gun. It's worth destroying the surrounding crates to replenish your ammunition. Watch out for red exploding crates. Destroy them from a distance and preferably only when opponents are standing next to them.

You can test the new weapon right away - you can fire at blarg ships. Thugs will also appear. Attack the thugs from a distance or get close to them and use the melee weapon. After the fights, use the new moving platform. 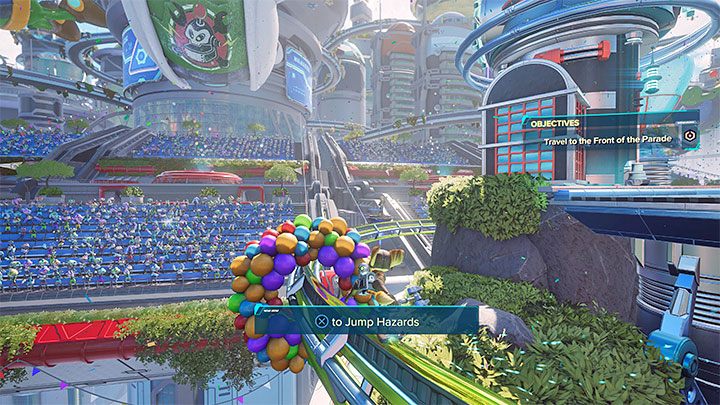 After a short cut-scene, you will begin your first grind on a rail. Avoid obstacles by doing double jumps. You won't get any penalties in the prologue, but later in the campaign, you can die this way. 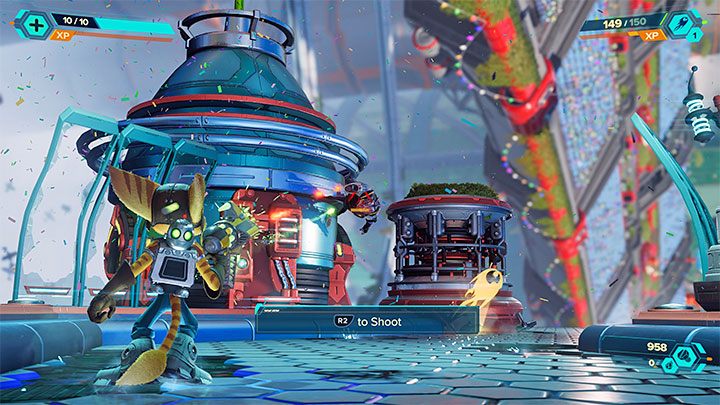 In the next part of the parade, you will be able to test the Magnebootsknown from previous Ratchet & Clank games. Thanks to them you can stick to shiny metal surfaces and move upside down, for example, without the risk of falling into an abyss.

Keep moving and defeat all enemies standing in your way. 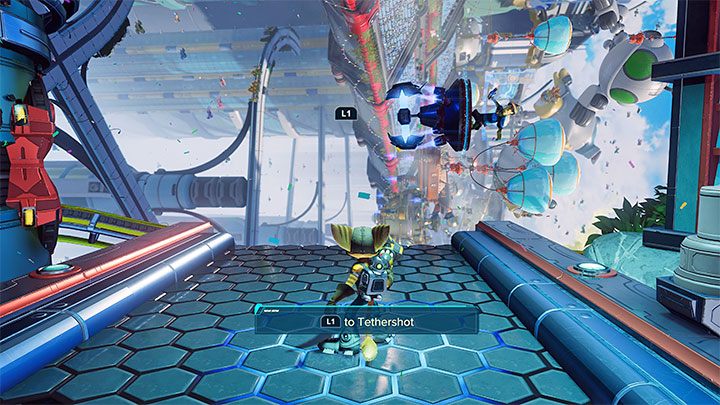 The magnetic path will lead you to the first Tether. They work similarly to anchor points. You can press or hold L1 to catch them. Watch a cut-scene. You can use some of the tethers found later in the game to swing and move further. 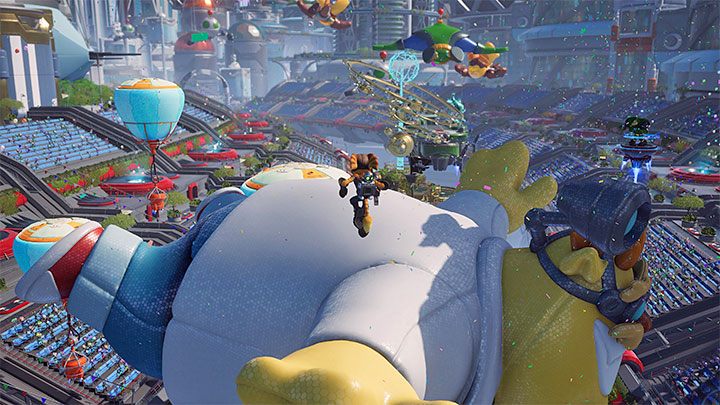 In the next location, you can test the ability to bounce. Here, you will have to bounce off of huge balloons. Remember that you can press X again while in the air to double jump. This may reduce the risk of falling into an abyss. 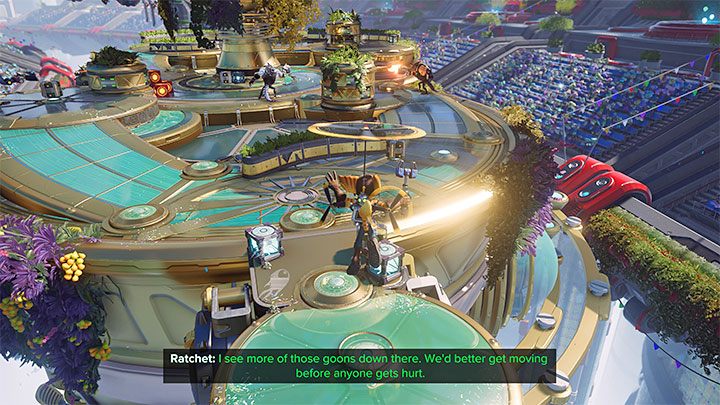 After landing on a small beach, be ready to fight more enemies. Remember to aim at red objects to detonate them at the right moments.

You will reach a point where you have to Glide to a lower platform. After bouncing off something, hold down X to activate this ability. There are two versions - Clank's propeller or verniers in your shoes. However, their effects are identical. 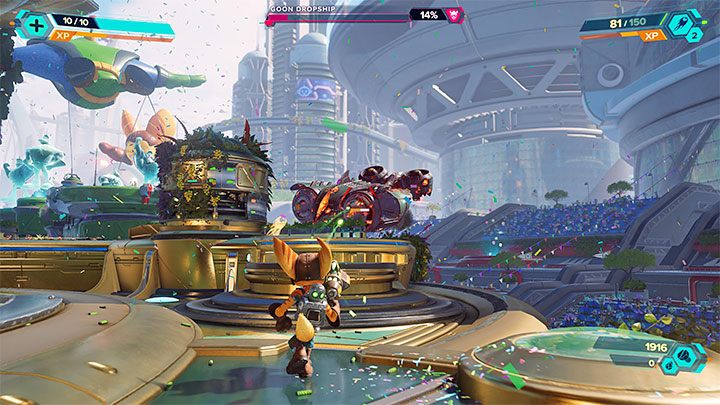 Fight more enemies on the larger platform. Stay on the move and remember to destroy red exploding crates when there are enemies standing nearby them.

You will also face a mini-boss - Goon Dropship. This fight is not very difficult. Keep firing with the Burst Pistol and smash the crates if you run out of ammo. Move around a lot to avoid being an easy target. Also, quickly attack any reinforcements, preferably right after they arrive. After winning the battle, move forward and watch a cut-scene starring Dr. Nefarious.