This guide to Railway Empire contains a number of hints and descriptions that will help you manage the railway monster in a professional way. Here, you will learn many basics, including how to lay down tracks and establish new connections. You will learn how to use railway signs, as well as the more advanced methods of building railway lines. This guide also provides information on other aspects of the game, such as research, personnel management, and financial management.

How do I start?

The game guide provides a handful of hints that will prove useful at the beginning of the game and later on. You will learn how to best invest research points, how to use your personnel and what to pay attention to.

Laying down tracks and establishing lines

This is bread and butter in Railway Empire. It's worthwhile to learn useful information on how to build and design railway lines. In itself, establishing of lines is not difficult, but this will change as you own more and more trains. This is why, the skill to plan and establish new lines is indispensable and it helps you handle your network of connections effectively.

Signaling equipment and storage - the advanced art of track laying

As soon as you have mastered the basics of establishing simple connections, you will find yourself in need of more advanced ones. Signaling equipment makes railway transport easier. This way, more trains will be able to operate in smaller areas. Storages will make it easier for you to transport materials to cities - they are intermediary stops. They will come in handy while supplying many factories, towns and cities.

How to earn money?

Money is the key to success here and you will earn it predominantly from trains. Some of your profit will originate from other sources, but this is only a small percentage of what you will earn from railway transport. In the following chapters, you will learn about the best ways to earn money and the best practices you can employ for that purpose. Just as important is the development of cities and factories, thanks to which your profit will rise.

...as well as all the minor issues that will prove useful during the game. Personnel mainly affects specific trains and your company. Special rail cars are unique elements of your trains that provide you with specific bonuses. Thanks to research, you will be able to upgrade your trains and unlock railway engines. You will learn how to buy out your competitors, as well as how shares and bonds work.

In this part of the guide, you will find walkthrough and hints that will make it easier to complete all five chapters! 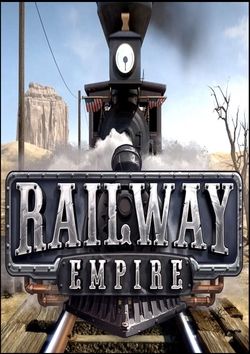 Railway Empire is set in the United States and the starting point is in the year 1830. Our goal is to create a railway empire and eliminate our competition. The game spans throughout many years allowing us to even play in the 20th century.

Railway Empire, released on PC / Windows, is a classic economic strategy game  that means that the game revolves around developing our company and finding a balance between the incomes and expenses. Our responsibilities are: creating new railways, buying and upgrading trains as well as transporting people and goods. We also need to invest in train stations, buildings in which we can repair our vehicles, factories and even tourist attractions for passengers.

This site is not associated with and/or endorsed by the Kalypso Media or Gaming Minds Studios. All logos and images are copyrighted by their respective owners.