On this page of our guide to RAGE 2 we have prepared a detailed description of The Signal story mission. This is the second mission of the main storyline and commissioned by John Marshall. During this mission main character has to investigate two hostile places and defeat a lot of Shrouded units. 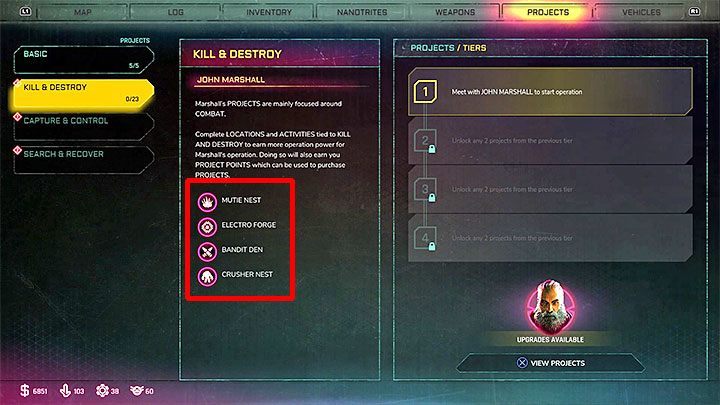 You must first complete the first story mission commissioned by John Marshall - it is a quest called Blackout - the description of which can be found on a separate page of our guide.

To unlock the described task, look only for the above types of sites. Completing and exploring other locations will not bring you any closer to unlock John Marshall's story mission. 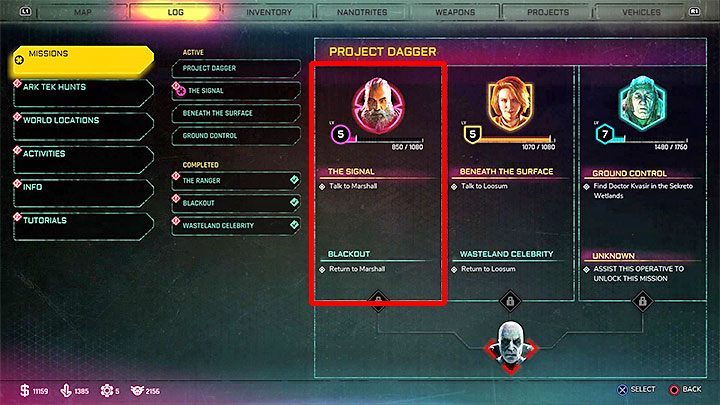 You can check your progress in gaining reputation, among other things, on the story missions tab (example shown in the picture).

Once you find yourself on the fifth level, wait until Marshall will contact the hero on the radio and ask him to meet. Go back to the Gunbarrel city and once again get to the room located under the bar. Talk to John Marshall to find out the details concerning the new mission. Also take a new gadget (Locus) from the table. 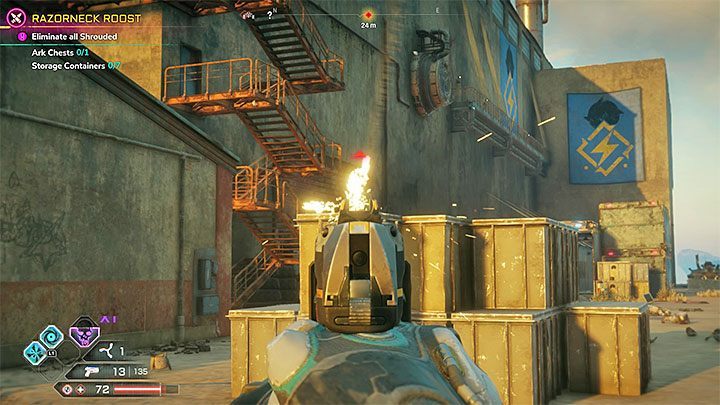 Go to the bandit den called Razorneck Roost located to the south-east of the city. In the site you don't fight with ordinary bandits, only with Shrouded soldiers. You can encounter the first opponents even before you get into the main building.

Shrouded use armor, so it's good to have a shotgun and other weapons with a greater force of destruction. Instead of having to aim in their hats try to target around the chest, to deprive them of successive fragments of armor. Some Shrouded can use camouflage. They do not become completely invisible, but it becomes, unfortunately, much more difficult to notice them. Wait until the disguise is turned off, or rely on rocket launcher and grenades to kill them "blindly" (this, however, is rewarded with the achievement Peek-a-boo). 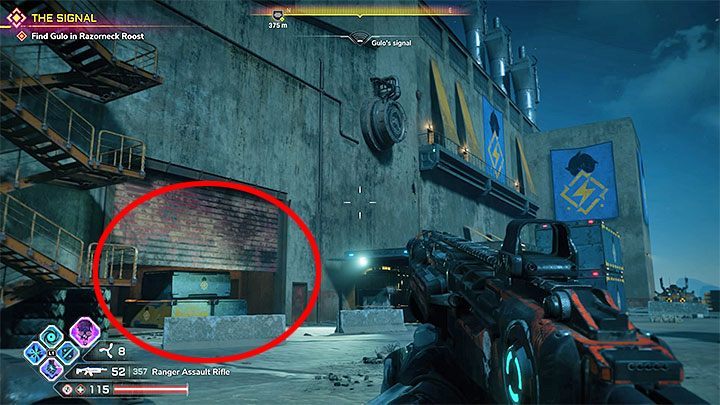 You should be interested in the largest building in the area. Find the side entrance to it (check the image) and then make your way to the top balconies. This will allow you to get into a huge room where you will be engaged in the elimination of other Shrouded soldiers.

During the battles beware of the elite soldier with energy weapons, which can go down the hall on the Elevator. It is best to use Hyper-Cannon, rocket launcher, grenades or other similar means. Fight the enemy in heavy armor at a distance and run a lot on the sides, so as not to get hit. 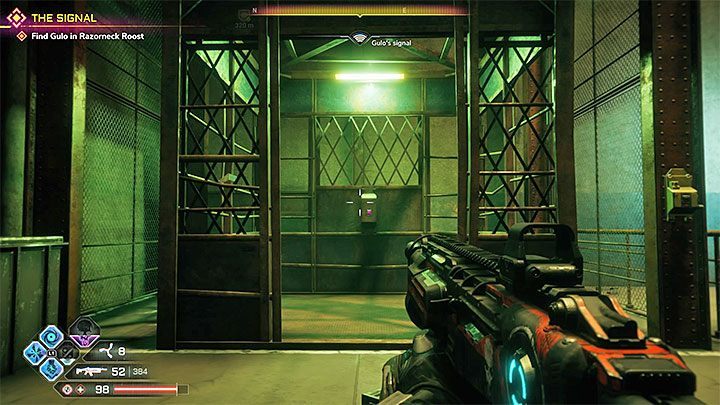 After the battle, get to the elevator, which the enemy in heavy armor has taken. Enter it and go to the top floor of the building. Find the nailed corpse of Gulo. Go to them and click the interaction button to loot them. Listen to Gulo s Last Recording.

You will receive another objectives from John Marshall, this time, regarding the exploration of Abandoned Authority Base. You don't need to use the elevator again. You can go out on the roof and use the zipline to quickly move down. 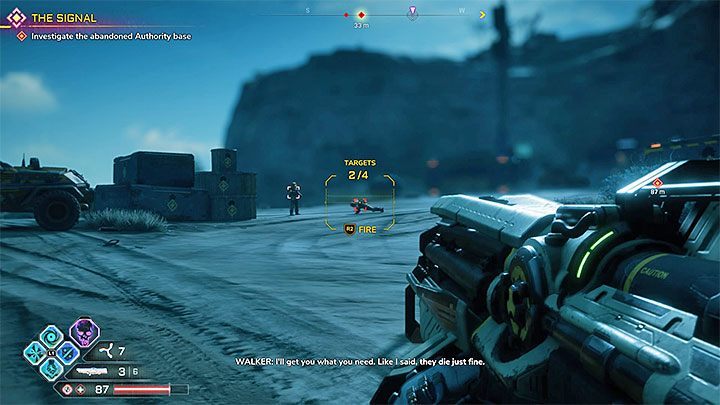 The new purpose of the trip is Abandoned Authority Base, located in the southern part of the map, in the region of Twisting Canyons. There's only one way that may take you there (check your GPS).

Start by defeating new soldiers standing in front of the base. Then go inside and start to explore it. You will meet new opponents here on a regular manner, and some of them can be attacked by surprise. You should rely on this, for example, if you have a rocket launcher that can simultaneously shoot at more than one target. 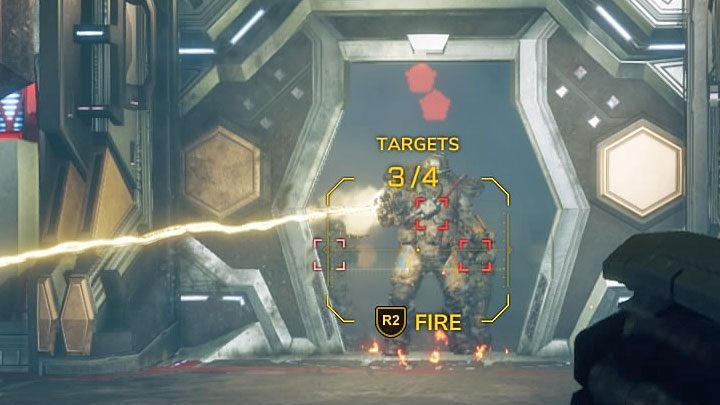 You need to get to the main room of the base. Look around it and go to the interactive post to extract the data.

The room will soon fill up with strong opponents. They will destroy the doors shown in the picture. It is necessary to prepare to repel this attack and use a rocket launcher or throw grenades as soon as the doors are blown up.

Return to Marshall and complete the mission 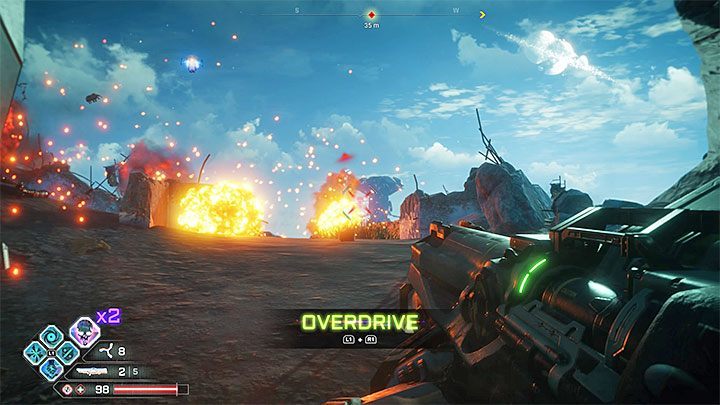 You can use the path destroyed and cleared by enemies. Consider, however, that on the way to the exit from the base you will fall into another pack of soldiers. The last battles will happen on the surface. Rely on strong weapons and skills to emerge victorious from this clash.

You can use fast travel option to quickly return to Gunbarrel city. Go down to the bunker under the bar to talk to John Marshall. At the end take the Scrambler from the table.

For completing this mission you will receive a bronze trophy - The Signal.