Best car: Just as before, it doesn't really matter which vehicle of the Drift category you'll decide to choose for this event. I would recommend having a car with a lower Grip value, so you won't have any problems performing massive drifts. If you're a less experienced driver, choose a Toyota or a Nissan.

Hints: You will have to win four runs in order to achieve victory in this tournament. Thankfully, you'll be the only car on the track, so you'll be capable of performing cool drifts without having to worry about other drivers. As you've probably noticed, this is a narrow track, so you won't be allowed to move too much to the outside once you've started drifting. You will also have to be careful near some of the sharper corners, especially when you plan on getting closer to the cones. Each run will require you to gather at least half a million points. It shouldn't be too difficult, especially if you've increased your multiplier a few times. 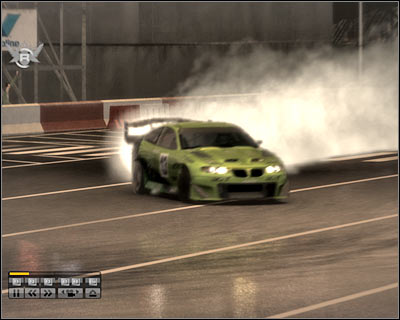 Best car: This is a GT1 class event, so you should be familiar with the fact that you'll be presented with a lot of interesting vehicles. Saleen S7R and Aston Martin DBR9 are some of the best cars in the pack. Saleen is easier to drive and Aston is faster. The choice is yours. :-)

Hints: The first track of this tournament is located in Washington. It won't be easy to win here, since you'll be struggling in the first section of the lap. Nevertheless, you should focus on having a perfect start. Choose sharper corners for places to perform overtaking maneuvers. Don't forget that you'll be allowed to cut through some of the corners (screen) without having to worry about losing control over your car. Avoid ramming into other vehicles, because these crashes may send you somewhere outside the track.

The second race is in Shibuya and you shouldn't be surprised to hear that it's going to be the easiest one. Use the fact that your rivals are slow here and attack them from the inside whenever you're close enough to them. Watch out near the roundabout, because it's easy to crash there. 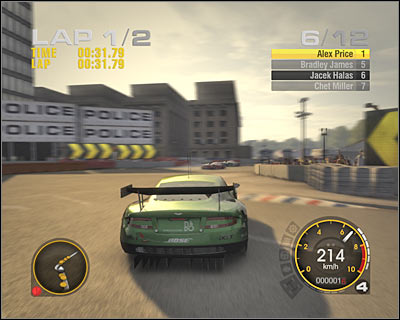 Istanbul Park is an easy track, however you'll be going in an opposite direction, so it'll make your life more difficult. Watch out for the hairpins which can be found near the start. The most difficult section is the sharp right turn (screen) which is located in the middle of the track. You'll be travelling at a high speed there and you won't notice it if you don't know that it's there. Look on the minimap and brake once you're close enough to it. Some of the other corners are also quite challenging, however you should be able to reach the finish line without any major problems.

Jarama circuit is one of the easiest events of the tournament. There's nothing you should be worried about while racing here. Try cutting through most of the corners and maintain optimal speed while going through both hairpins. You're probably familiar with the layout of the track, so you'll know where to brake and where to accelerate. 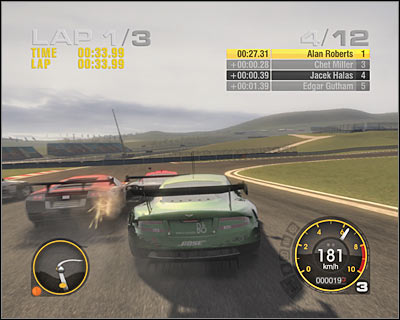 It's been some time since you've last raced in Long Beach, so you should take it easy, especially since there are a lot of difficult corners here. Choose these bends for places to overtake other players (screen). I wouldn't recommend cutting through smaller chicanes. You should also stay away from the barriers, because you may hit a tire wall instead. 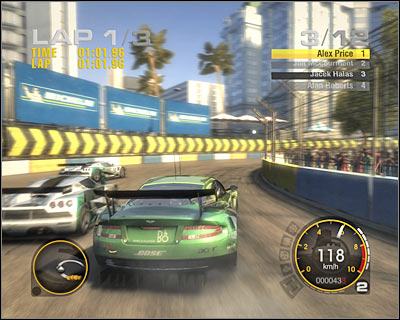 Best car: Since you're capable of choosing LMP1 class vehicles as well, there's only one vehicle you should be interested in. Obviously I'm talking about an Audi R10 TDI. You've probably used this car many times before, mostly during Le Mans 24 Hours events. If by any chance you don't like the car, consider choosing a Ford Doran JE4 instead. It's slower than the Audi, however it's easier to control.

Hints: This is going to be a quite challenging tournament. The biggest difficulty is that you'll have to take control over an extremely powerful car. Some of the tracks are going to be narrow, so you'll have some problems navigating through the corners. Also, don't forget that all the vehicles from the LMP1 class tend to become unstable at lower speeds. Prevent them from sliding or you're going to crash. Winning in all five events is possible, however you won't have to fight so hard to be the first one in each event. Try winning at least three times. As for the remaining two races, podium finish is going to be more than enough to succeed in the overall standings.

The first race of the tournament is going to be one of the most difficult ones, especially since you will have to deal with a large number of tight bends. Also, you won't be allowed to crash into other vehicles, because you can't win a race in a damaged car. Thankfully, you will have a few opportunities to overtake other vehicles (screen). Watch out for a few narrow sections, including the tunnels.

Washington also has a challenging circuit. It's important that you don't make any mistakes here, especially after the race has started. Watch out while going through some of the fasters corners, because you may lose control over your vehicle for a split second. There are some hairpins and tight corners on the track and that's when you'll have to perform overtaking maneuvers. 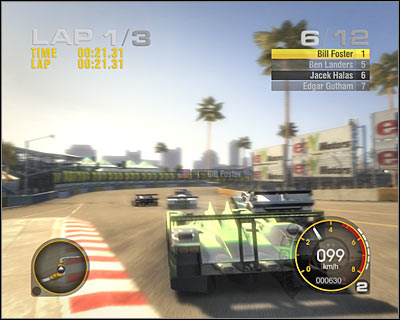 The third race in the calendar is on the Nurburgring circuit. It shouldn't be a problem to win here, especially since AI drivers are moving slowly. Use the first hairpin to overtake as many vehicles as possible, however don't try cutting through this corner too aggressively or you'll lose control over your car. The second area where you have to be careful is the final chicane.

Action of the fourth race of the tournament takes place in Milan. This seems to be the most difficult event of these series, mostly because you'll be dealing with a very narrow track. You won't be allowed to make any mistakes. Watch out near the finish line, because you'll be travelling at very high speeds. You won't be allowed to slow down, so you'll have to adjust your driving line constantly (screen), especially since exceeding a top speed of 340-360km/h isn't something out of the ordinary here. As for slower section, watch out for the area near the roundabout and prevent your car from hitting the barriers or the tire walls.

Spa circuit is the final event of this championship. It's not going to be too difficult, however knowing the track and the capabilities of your vehicles are key points to success. Cut through the first corner and start accelerating. Be careful in the middle of the track - you won't be allowed to slow down there. The final section will require you to travel at a full speed. Thankfully, even if you'll end up outside the track, you'll still remain on the asphalt, so you won't have to worry about anything else. 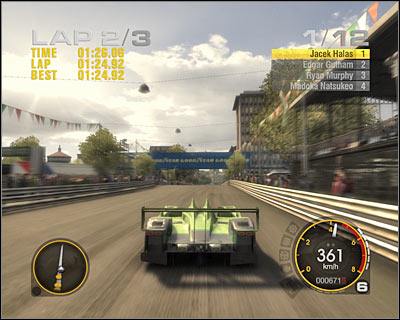