Best car: The title of this tournament suggests that you'll be allowed to choose between two vehicles. Nissan Skyline GT-R Z-Tune is a much better choice, because it's easier to handle than Dodge Viper SRT-10.

Hints: I'm certain that it's going to be very easy for you to win in all of these events, mostly because computer players won't be as fast as you would expect them to be. Additionally, Skyline is perfect in these conditions. Controlling the vehicle through tight bends is going to be very easy. Your only concern is going to be the second run in each race, because you'll be starting there from second place. Don't forget that you aren't allowed to hit your competitor, because you would be punished with a few seconds added to your overall time. Try overtaking your opponent as soon as you've started the second run (screen). It shouldn't be a problem, especially if you've started without the wheels spinning. Doing this will allow you to catch up to him quickly. Once you've taken the lead, focus on defending your first place, but don't crash into any barriers at the same time. 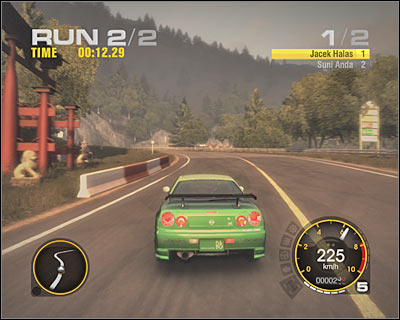 Best car: Once again, you will be dealing with cars made by Nissan. You will have to choose between Skyline GT-R and 350Z. I would recommend taking the 350Z for a quick spin, however you can also choose a Skyline, as long as you're comfortable with how this vehicle handles on the road.

Hints: You've been to this track before, but probably only once (during a drift event). As you've noticed, both tracks in this tournament are very wide, however you won't be allowed to perform any risky maneuvers, because it's easy to end up outside the track.

The first race of the tournament is slightly easier than the second one, because you won't encounter too many difficult corners. You will have to go through a very long curve once you've started. Don't even think about slowing down here. Instead, try sliding a little bit. Overtake at least a few cars, but avoid hitting them. Watch out for the first tight bend (screen). Stay on the inside, because otherwise you would have ended up being caught in the gravel trap. 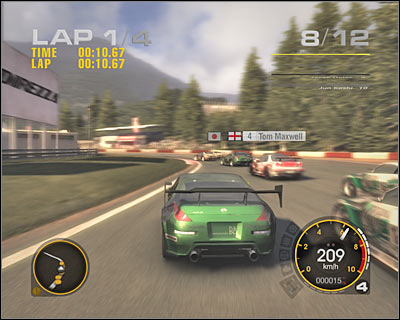 You should be able to reach a new set of corners very soon. You will have to maintain a correct racing line here, so you won't slow down too much and you won't end up outside the main track. The final sector of the lap will require you to turn left (screen). Stay on the asphalt road and you should be fine. You've got three more laps to go. Try closing the gap to the leaders and watch out while going through some of the trickier corners. 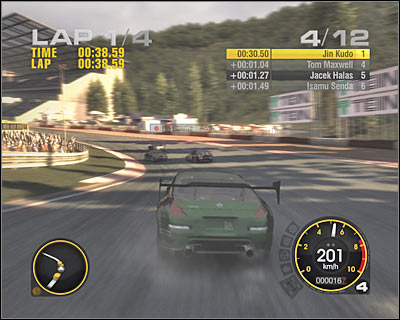 The second race takes place on a slightly more difficult track. You'll revisit the same place, but this time you'll be going in an opposite direction. As a result, it's going to be harder to go through some of the corners. You will also have to slow down more often. The most difficult corner of the race is the second one (screen). Start moving right even before your see it, because otherwise you'll end up going straight and you'll be overtaken by all other drivers. 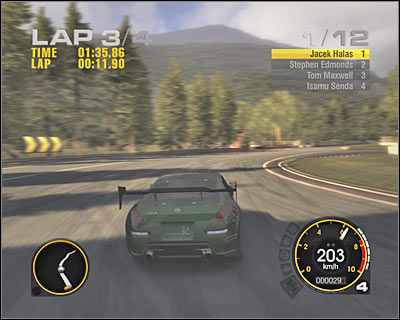 Hints: This duel is going to familiarize you with new types of events, called Midnight Touge. The whole idea for a race is very similar to Pro Touge, so you'll have a canyon road and your task will be to get ahead of the second car. The only difference is that the race is going to take place at night. You will only have to win one run, however reaching the finish line in this head to head challenge is going to take you more than three minutes.

As you've probably suspected, even if you manage to pull off a perfect start, your opponent will take an early lead. It's up to you to take that lead away from him. As a result, you will have to go through the first set of corners flawlessly and eventually you'll end up going side by side (screen). Block him, however avoid crashing into his car. Thankfully, you won't have to worry about him fighting back, because it's a very narrow track. 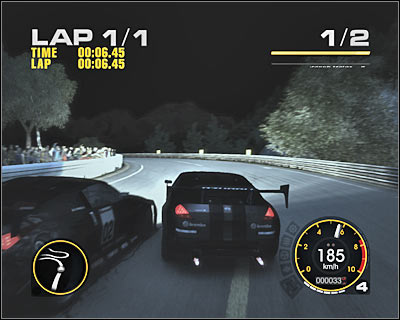 I guess it won't come as a surprise to you that the track is going to be quite challenging. There are a lot of hairpins, as well as tricky fast corners. I suspect that you may have some problems using the brakes in few areas (screen). Push the brake button early, so you won't end up hitting the wall. Leaving the asphalt road will also give your rival an opportunity to take the lead, so you can't allow that to happen. 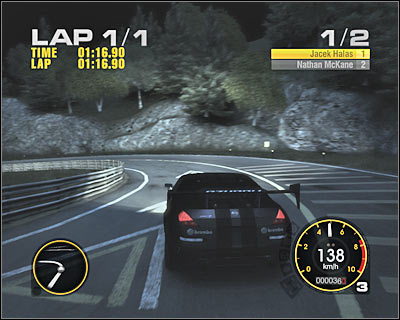 The final sector of the track will force you to deal with a large number of very sharp turns. You've got three choices here - you can try drifting, you can try maintaining an ideal racing line by going from one side of the road to another or you can try slowing down immensely each time you approach a new hairpin. Either way, you should stay in the lead. Watch out for a few fast corners (screen). Block your opponent here if you see him on your minimap. The final section is identical to the one from Pro Touge, so you should be able to pull off a safe win. 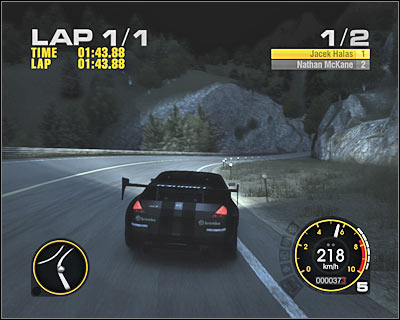