Best car: I guess you may be surprised a little bit by the fact that you'll be allowed to choose between many different vehicles. If you think you're an experienced driver, consider purchasing one of more expensive cars. Mazda RX-7 FD3S should do the trick, however it's difficult to drive. I think that you should consider buying Toyota Corolla GT-S which is the cheapest car in the lot. It's not the fastest, but it handles great and you'll be able to pull off some cool maneuvers with it.

Hints: All three races are going to be quite challenging, mostly because you'll be racing on closed circuits which weren't built to host these types of events. It'll make your drifting more difficult, because each contact with the barriers will purge your current account. The event you're about to participate in is a combination of drift and a standard race. This means you'll have to stay somewhere in the lead, because otherwise you'll earn less points for successful drifting. I would recommend that you aim for a third or a fourth spot. Don't try overtaking the race leader at all costs. Instead, focus on performing good drifts. You should also take your time once the race has started, because it always gets crowded near the first corner and you won't be able to slide the car properly if other vehicles are blocking your path.

The first race will allow you to perform a good slide once you've reached the first corner (screen). You should be able to earn a lot of points here, as long as you stay away from the right wall. Remember to get as close to metal poles as possible, because then you'll be rewarded with large bonuses. Maintaining a high multiplier is equally important, so you can't take too long between the drifts. Watch out inside the tunnels, because it's very easy to hit something there. Later on you'll come across more open areas, however you should try maintaining a perfect line, especially if you want to get closer to the poles. Additionally, you could lose control over your vehicle as a result of straying off the main track. 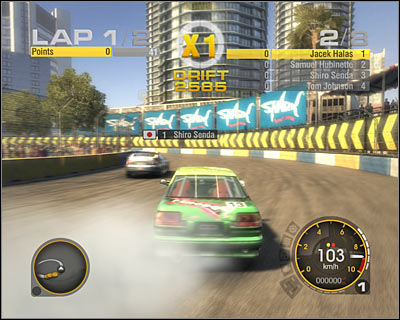 The second race in the series seems to be even harder. Don't focus on the first corner, because it's very tricky and you'd have to restart the race many times to achieve something here. Instead, approach the left turn properly (screen). Try scoring points mostly for long drifts. There are a lot of mild corners here, so it shouldn't be a problem. You should also pay attention to other drivers. Prevent too many of them from overtaking you, because you won't be able to score many points from the back of the grid. Avoid hitting tire walls. Thankfully, you won't have to worry about the grass, because leaving the track for a second or two doesn't necessarily mean that the race is over. You will have to finish three laps, so don't use up all the flashbacks right away. 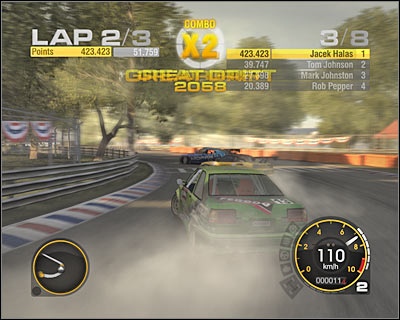 The third race takes place in the same location you've visited earlier, however the biggest difference is that you're moving the other way. As you've probably noticed, you will have to learn all the corners from the beginning. Focus mostly on longer bends and tight turns. Just as before, you'll also have to be extremely careful inside both tunnels (screen). You can earn a lot of points here, but you also may lose them if you push too much. The final corner is easier to get past from this side, so you won't have to worry about it. 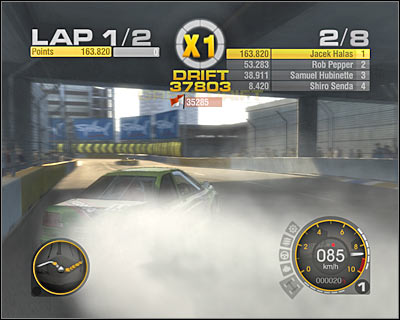 Best car: Zonda R seems like a much better choice. Not only does this car accelerate faster than the Koenigsegg but it's also easier to drive. Koenigsegg is only better at achieving large speeds, however it's very easy to spin the car by mistake.

Hints: Theoretically it might seem that these races should be fairly easy, however both cars in this class are very fast and it'll make your run a lot harder. You won't be allowed to cut through the corners and you'll have to maintain high speeds while going through some mild curves. The first race will require you to be very precise, especially in the middle of the track. Maintain a perfect racing line in order to avoid any crashes. Watch out for the right turn. Also, slow down near the last chicane (screen), because both cars are wide and you would have some problems fitting in. Slowing down a little is always better than crashing and damaging your car. 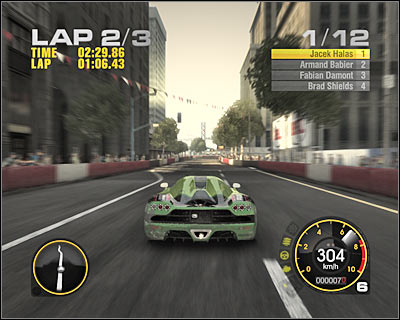 The second race seems to be the easiest one of all three. As you probably remember, it's important to find yourself on the inside while taking the first turn. This should allow you to advance a few places. Next up, focus on going through the slowest section without any crashes. Once this is done, speed up and start chasing after the current leader. You should be able to win this race, as long as you're fast enough in the second section of the track.

The third race is quite simple, however you must take under consideration that you're driving a fast car which is also unstable at lower speeds. Watch out for the first section of the track. Thankfully, other players will also slow down here, so you'll have plenty of opportunities to overtake them. Watch out for the chicanes, especially the one that's been displayed on the screen. Use tight turns to your advantage, however slow down once you've arrived at the final two chicanes. 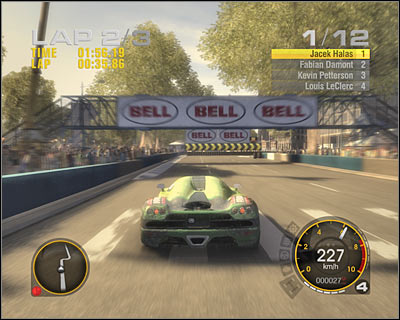