Best car: You will be allowed to choose between two GT2 class vehicles. Spyker C8 Spyder is a little faster, however it's very difficult to drive and it has poor brakes. As a result, you should consider purchasing an Esperante which is a much better choice. You'll notice the difference between these cars very soon, because the first track will require you to brake a lot.

Hints: I'm sure that you're familiar with all three tracks of this tournament, however you will have to take under account the fact that both cars from this group are very difficult to drive. Panoz and Spyker tend to slide a lot and they're very unstable at higher speeds. I would recommend that you practice driving a Panoz in the Race Day mode, so you won't be surprised by how bad it really is once you've entered this event. You should also know that vehicles from all four classes will participate in this tournament. Obviously you will have to win in the GT2 class. This means you will have to finish at least eleventh (if none of the faster vehicles suffers from a crash). You could try overtaking cars from the GT1 class, however it's not necessary. Focus only on winning your group.

The first race should allow you to take an early lead, however only if you went through the first chicane at a maximum speed. Watch out while going through tight corners and chicanes, because it's very easy to spin a car. Don't try cutting through these corners. There's a possibility of losing control over your vehicle, so you shouldn't risk losing your lead. Instead, drive a little slower and block your opponents. The middle section of the track is by far the most difficult one. You will come across two fast corners here (screen). Maintain a perfect racing line and prevent other vehicles from taking the lead away from you. Once this is done, focus on moving as fast as possible. Brake hard once you've reached the chicane. Thankfully, the finish line is located ahead of the hairpin, so you won't have to worry about it as well. 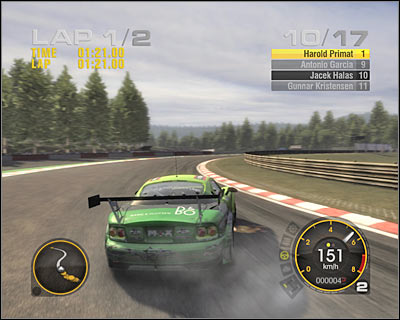 The Istanbul Park track seems to be the easiest one of all three, however this doesn't mean you shouldn't be careful. Some of the faster corners of the track will require you to slide a little. Doing this will prevent other drivers from extending their lead. Thankfully, you'll have a lot of opportunities to overtake them. Watch out near the end, especially while going through three hairpins. It's very easy to spin a car out there and you can't allow that to happen.

The third race seems to be a little harder than the second one, however you should also be able to pull off a win here as well. Just as before, the key to success is to go through some of the corners at a higher speed (screen). You will have to prevent the car from sliding too much at the same time. The final part of the lap will require you to go through a well-known chicane. Maintain a perfect racing line here, so you won't have to worry about losing control over your car. 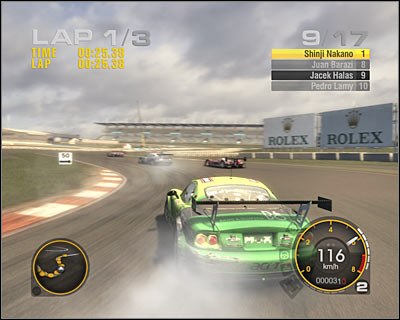 Best car: All the competitors are using Formula 3 cars (Dallara Formula 3), so you won't be allowed to choose a vehicle on your own. Sadly, acquiring a Formula 3 car means spending more than 300000 in cash.

Hints: You've probably dealt with a Formula 3 race event before (while trying to complete the US branch of the career tree). If not, you should picture them as a much faster version of Formula 1000 races. You'll still be dealing with a massively increased grip, however you will have to be extremely careful at lower speeds, especially while going through tight corners and hairpins. Spinning a Formula 3 in such conditions is a very easy thing to do. Like I've already said, these cars are much faster, so you'll also have less time to react to what's happening on the track. Consider spending some time in the Race Day mode before proceeding with this tournament.

I'm sure that you're familiar with all three tracks of the tournament, however you will have to change your driving style a lot in order to prevail. The first race should begin with a perfect start. This will allow you to overtake a few vehicles near the first corner. Now you will have to focus on going through some of the faster corners of the track. Don't make any mistakes. Try overtaking other vehicles near sharper corners, however avoid hitting them at all costs. Not only you would have damaged your car, but you would also end up outside the track. You may have some problems with four mild curves (screen). It's possible to go through them at a maximum speed, however you would have to be extremely precise and you wouldn't be allowed to hesitate. The final part of the lap consists of a large number of sharp corners, so this is your final chance to overtake other drivers. 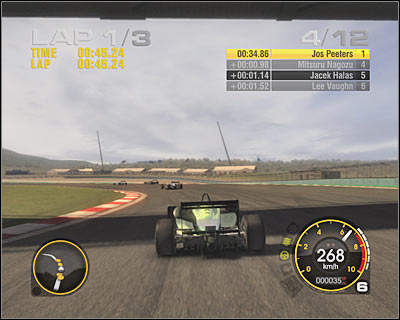 The second race is by far the easiest one, mostly because other driver tend to slow down a lot. This occurs for the first time after the start, once you've reached the first set of corners. Use this opportunity to get ahead of the competition. Be careful while going through slower corners and stay on the track.

The third race is going to be more difficult, however winning here is possible as well. Slow down before the first turn, because you can't afford damaging your vehicle. Head over to the hill and go through the chicane at a full speed. You can also consider moving to the left here in order to overtake other vehicles. The middle section of the track has to be done faster than usual. You can't use the brakes too often. Watch out for the first fast corner (screen). You can approach it at a nearly full speed. Also, don't forget about a tight chicane which can be found near the finish line. Maintain a perfect racing line there in order to avoid unnecessary spins. 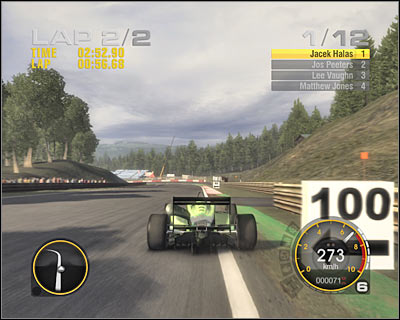