Advancing in the career mode

The career mode is built on a mechanism which simulates completing full racing seasons. It'll be up to you to decide where you want to race. You'll be dealing with two types of sporting events. Tournaments will reward you with a large number of respect points, however it's going to be difficult to raise a lot of money here, however this won't be a problem later during the course of the game. If you don't have enough money to buy new cars, consider participating in Driver Offers challenges. Here you'll usually be given a task to win a single race and you'll be rewarded with a lot of cash. The downside is that you won't earn too many respect points from these challenges, so you should ignore them once you can afford new vehicles. At the end of each season (which is about 8-10 races long), you'll be given a chance to participate in Le Mans 24 Hours race. Check the final section of this chapter for a more detailed description of this event. After that, you'll be presented with the statistics window. Here' you'll find out exactly how much money and respect you've earned. Thankfully, you won't receive any penalties for not being good enough, so may as well ignore these summary windows.

There are many different strategies to finish the career mode. By choosing racing events from the same class you won't have to worry about the difficulty level spiking up. The downside is that you won't earn a lot of money. I would recommend that you choose one class and focus only on finishing it. Doing this will allow you to earn more money quickly and you'll also receive better sponsorship offers. Check the following subsection of the guide for a more detailed description on how to handle with that problem.

You can choose from many types of races, but I think that you should be more focused on cars. I would strongly recommend purchasing one good car in each group in order to use it to win all races. The second chapter of the guide will point out the best cars, so you should head over there right now if you're having some problems finding good vehicles on your own. Additionally, it's important to buy ONLY new cars. Don't buy used models, because there's always a possibility that there may be something wrong with them and they're only slightly cheaper. 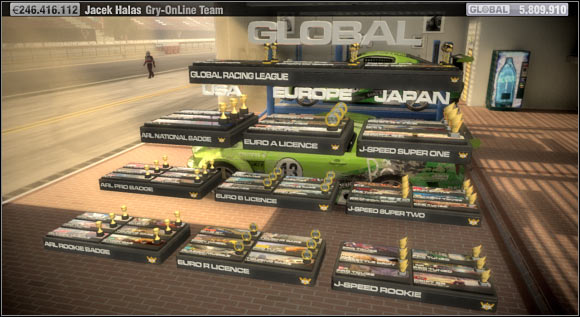 Winning all career mode races is going to take you A LOT of time, but it's doable. Good luck!

Once you've won a few racing events, you will be given a chance to choose between sponsorship offers for your team. There are two types of sponsors you'll be dealing with. You can only have one major sponsor, but such a company must pay you twice the amount of money it offered you in the first place. Additionally, you can have up to seven minor sponsors and they'll pay you exactly the amount they were offering.

The key factor here are the requirements of each sponsor. Early during the course of the game you'll be dealing mostly with companies which are interested only to see your cars reach the finish line. Sadly, the requirements are going to get bigger over time. I would recommend choosing a company which offers more than 100.000 euro for your main sponsor. Additionally, such a brand should only be interested in you finishing in the top two or the top three. As for other sponsorship offers, focus on choosing companies which are interested in podium finishes. Avoid firms with a first place or a no damage requirement. Thankfully, their offers aren't attractive enough for you to reconsider.

The amount of money offered by the sponsors is based on the class you're racing in. This is why it's very important to advance to the highest level of the race tree as soon as possible, so you can stop worry about raising enough money to purchase new vehicles. You should also try winning all race classes in the 24 Hours Le Mans race. Start with the lowest class (GT2) and finish in the highest class (LMP1).

Acquiring a fourth license will also unlock a new feature of the game - you'll be allowed to manage your team from now on. This means you can hire a second driver, so you can compete in the constructor championships and you can both earn money from the sponsors. Sadly, most of the AI drivers aren't too skilled. Hiring the professionals, on the other hand, is equal to a lot of expenses. You would have to give them a few million euros as a starting bonus and you'd also have to share a lot of your winnings with them.

The key elements of a good driver are his skill, aggressiveness and consistency, so he won't have any problems scoring a lot of podium finishes. Only then you can think about gaining other bonuses, as well as receiving a lot of many from your sponsors. You should take your time to analyze a racing speciality of your potential teammate. Be careful, though. If he's very good in winning races where you can't manage, you may have some problems acquiring these cups. Take this under consideration before you decide to hire him.