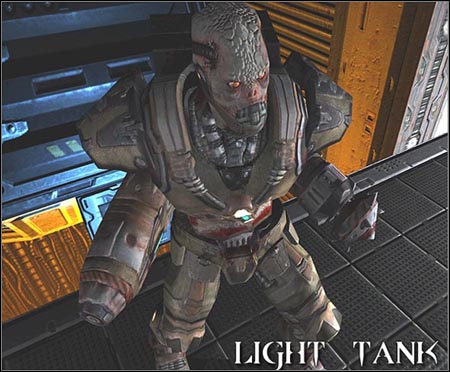 Very dangerous creatures, one of the toughest (750 health points) soldiers in Stroggos' army. They usually appear rarely (first time in Recomposition Center), but in the game's ending you'll fight lots of them. Light Tanks are very fast and really hard to defeat in hand-to-hand combat. They also use flame throwers and plasma rifles.

Light Tanks are stupid. They'll run in player's direction no matter the cost - you can easily retreat and bury them with grenades. The real task starts when Light Tanks attack in groups. In case of a real danger, use your best weapons, including Dark Metter Gun.