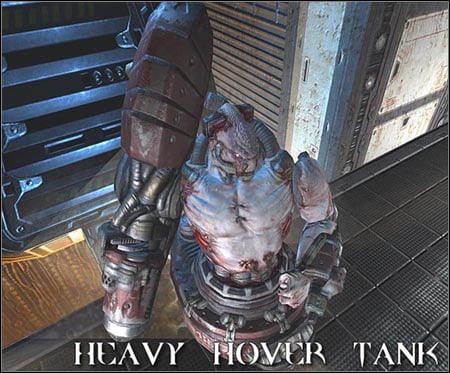 Soldiers with the ability to levitate, equipped with standard Blaster and Rocket Launcher. For the first time, you'll run into them in aqueducts, but it won't be a hard challenge - you'll have tank with heavy cannon on your side. True problems should appear in game's ending, when Heavy Hover Tanks will be defending Strogg's main complex. They occur in two types: smaller (800 health points) and bigger (1200 health points).

As I mentioned above, Heavy Hover Tanks can be difficult to defeat in the game's ending, when you'll concentrate on fighting with traditional weapons. During fight, try to move all the time. It's important, because Heavy Hover Tank's rockets may heavily damage Kane.