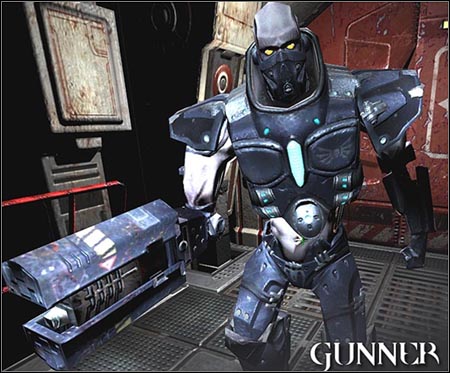 You'll run into Gunner for the first time during the third level (Hangar Perimeter). As tough and fast as Berserkers (300 health points), but they prefer keeping and fighting player at a distance. Gunners have nailed-machine gun and grenade launcher used alternately.

Gunners are very dangerous, especially when they're surrounded by other soldiers and when the situation forces players to attack few targets at the same time. If Gunner stand higher than the player (for example on balcony), he will use grenade launcher (fortunately, shells are easy to destroy in the air/on the ground). Attack with weapons similar to machine gun or Railgun. Accurate shot in the Gunner's head won't double damage, so give it up.