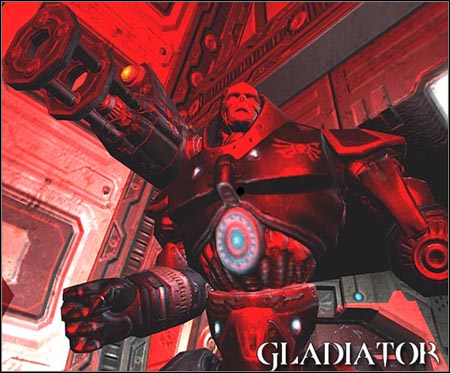 Gladiators don't appear in the game as often as above-mentioned enemies, but they can cause a lot of pain. Regardless of slow movement, they attack Kane with ease, using machine gun or Railgun. Gladiators are very tough (550 health points). Additionally, they posses energetic shield, protecting them against bullets from machine weapons.

The most important thing it not to leave Gladiators without bother. If you don't attack them, they will easily deprive Kane of health points with Railgun. Try to make use of their slow movement and run as much as you can. Machine weapons are no use, when the enemy enables energetic shield. The best way to defeat them, is to attack with Grenade Launcher (hard to miss), Rocket Launcher or Railgun. Accurate shot in the Gladiator's head will double hit damage - it's worth trying after activating Railgun's sight.