This page of our guide to Psychonauts 2 describes a boss fight against the Judges. You'll encounter these opponents in the Compton's Cookoff mission. 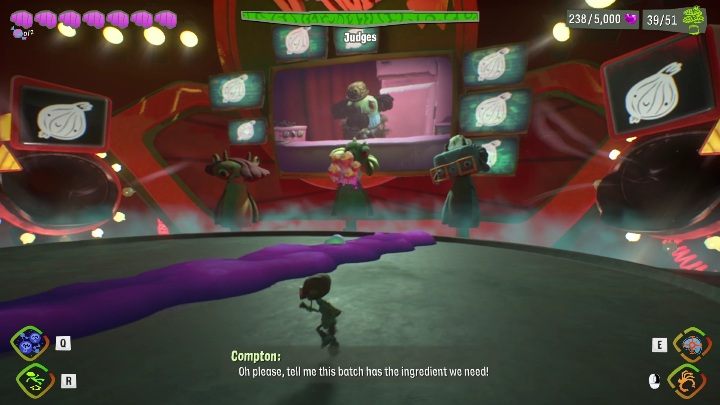 This boss fight is relatively simple and predictable, but if you die, you'll need to start all over again. 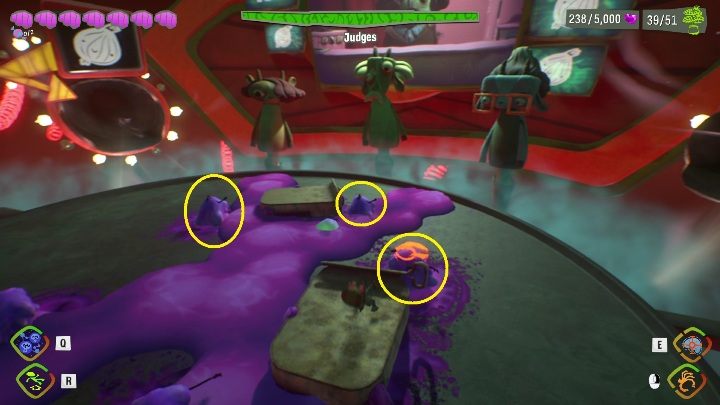 From time to time, the boss in the center will spit out several ingredients covered in sludge. You have to pick them up and choose the ones you need. 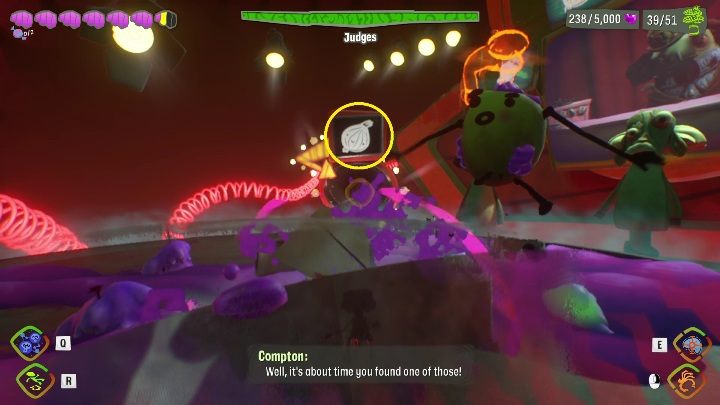 The first ingredient is an onion. Find it and throw it into the place show on the screen. 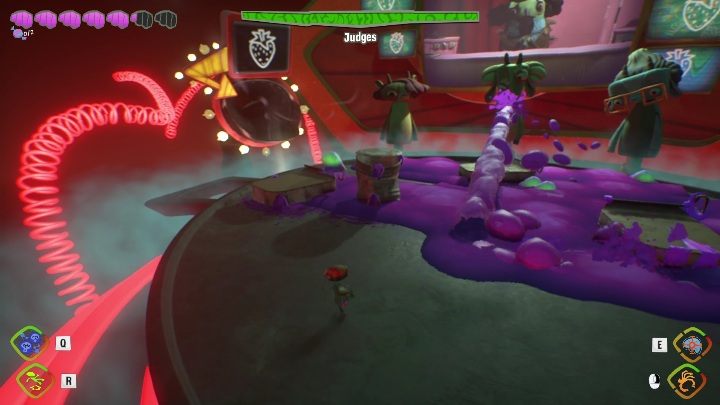 The bosses will attack you each time you supply an ingredient. They attack with bombs and sludge. Additionally they can try to ram you off the arena. 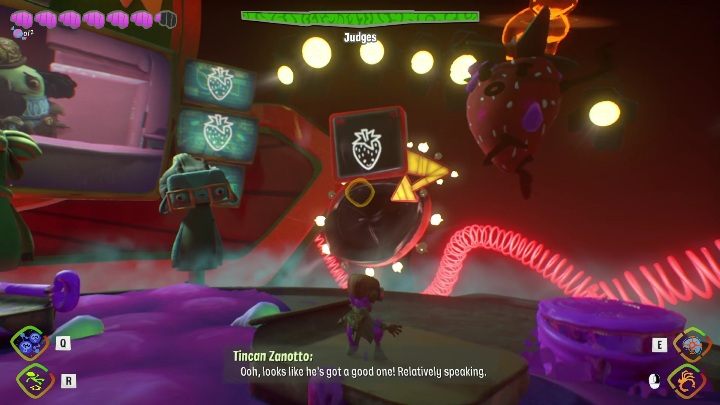 Your next objective is finding and supplying a strawberry. This will trigger a fight against a group of small enemies. 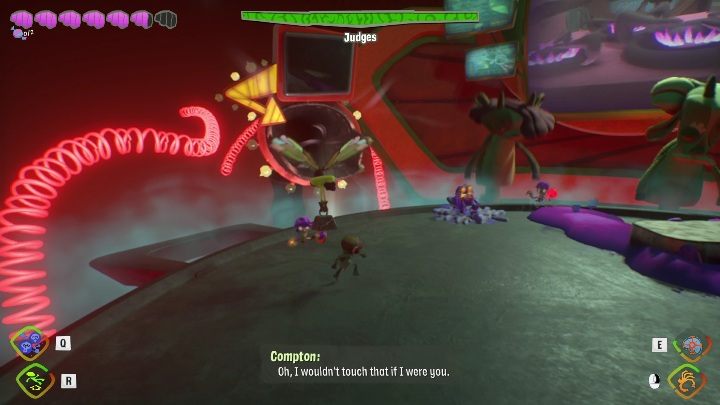 These small enemies can cause large battles in the middle of the boss fight. Additionally they can push you into the sludge the bosses left on the arena. 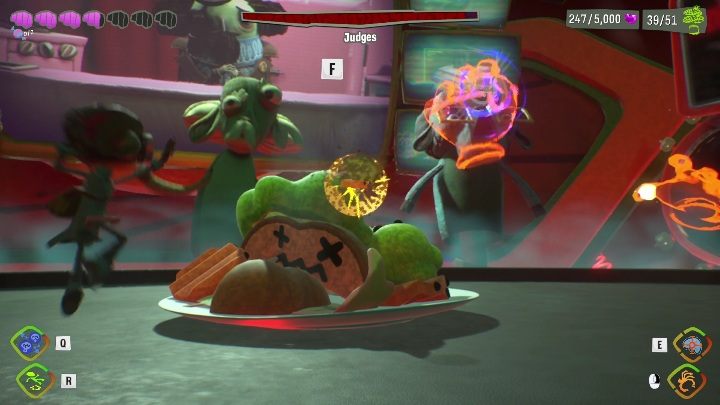 After defeating the smaller enemies, a plate of food will appear on the arena. Get behind it and throw it at the boss. This will finish the first phase. 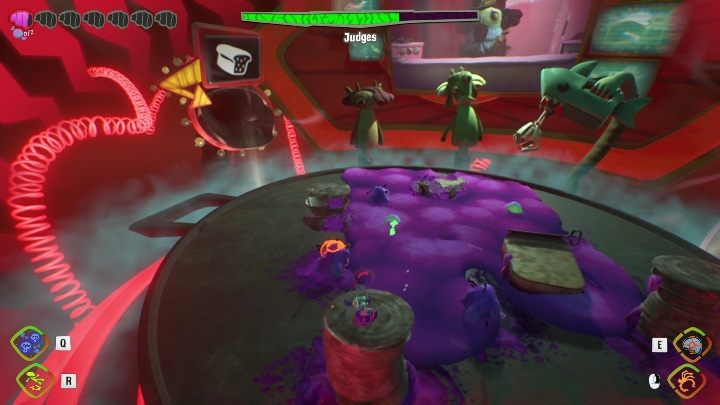 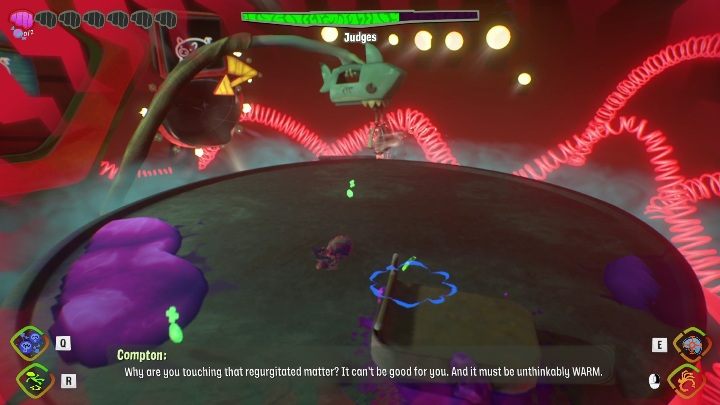 The second phase of the fight is not much different from the first one. Only one of the opponents got any new attacks. As phase two begins, he turns into a mixer and starts destroying the arena. The mixer destroys sludge, health pickups and platforms you can use to hide. 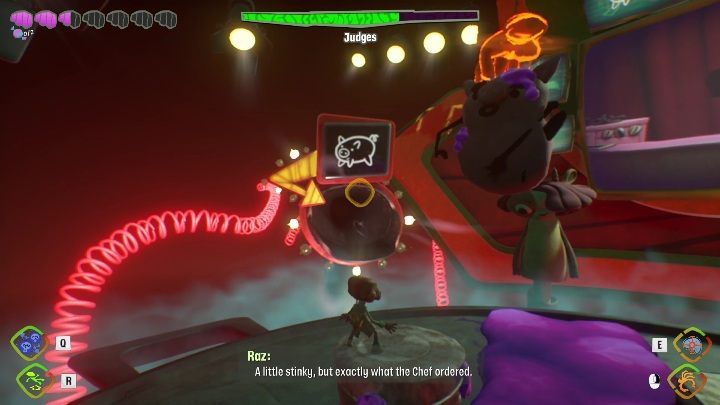 Begin the phase by finding a pig and throwing it into the tunnel. 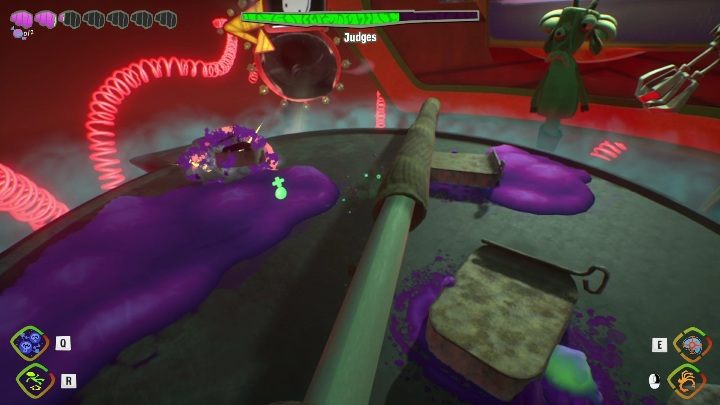 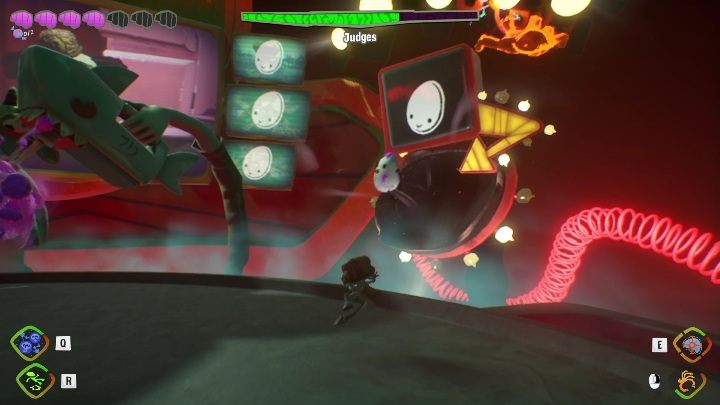 Next, find an egg. Avoid the bosses' attacks while doing so, not letting them take all your health away. 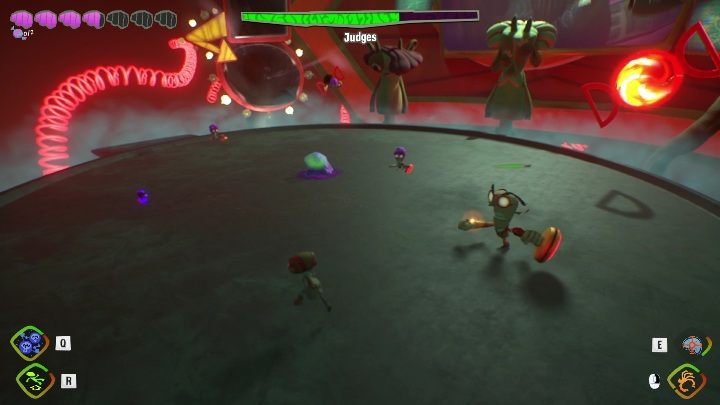 Once again, you'll have to face more smaller enemies. 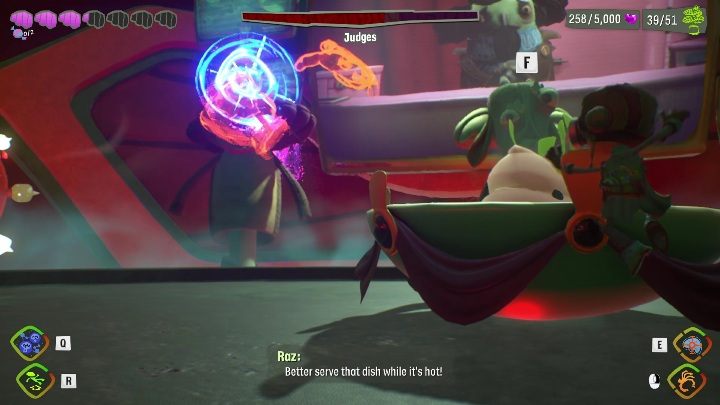 The next dish will appear on the arena. Throw it at the boss to start the final phase. 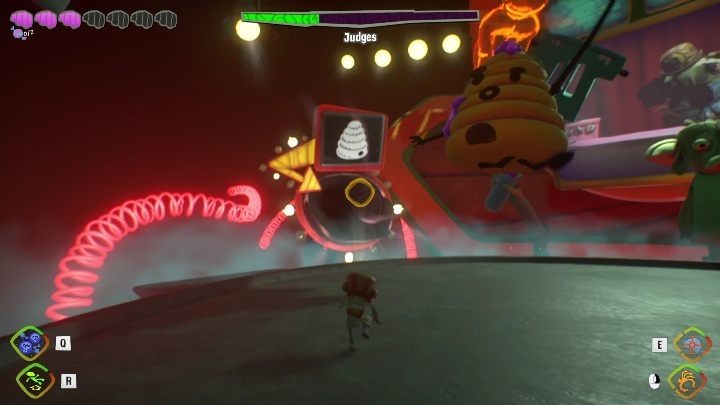 Before the enemies start attacking, grab some honey and throw it into the tunnel. 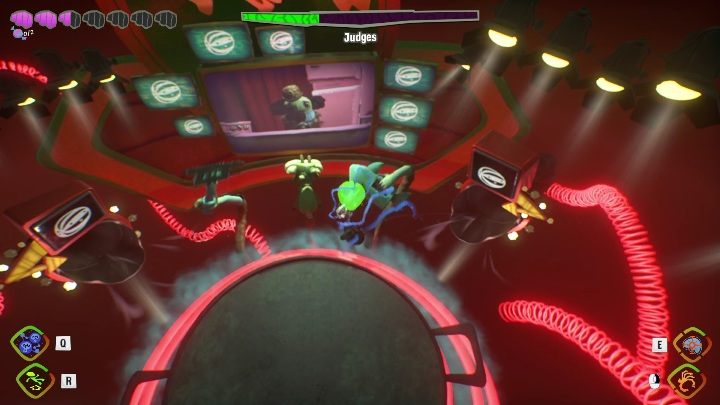 The bosses will gain another new attack. The judge you've defeated in phase two will start attacking you and knocking you up into the air. 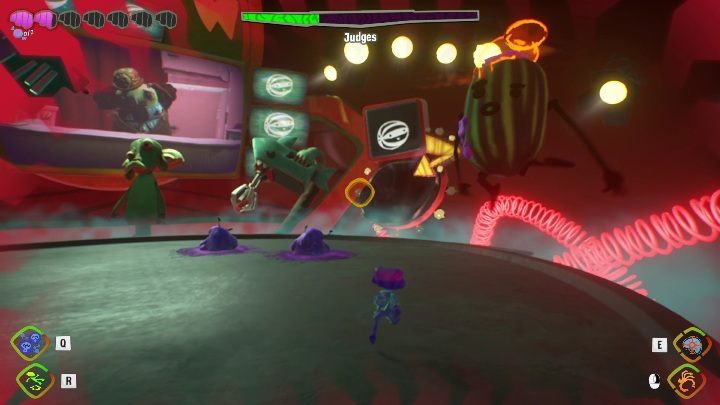 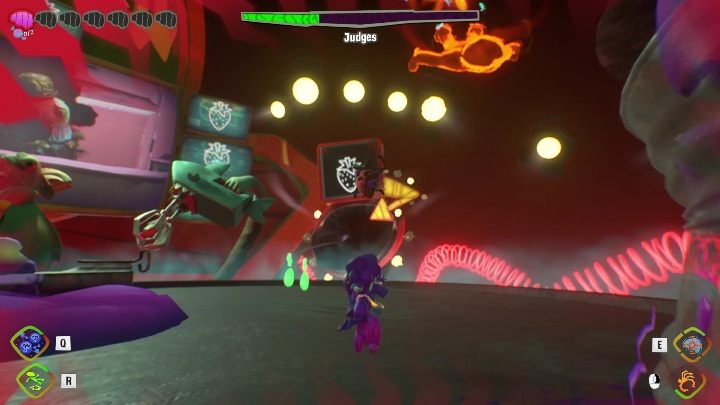 The next ingredients you need are a watermelon and a strawberry. 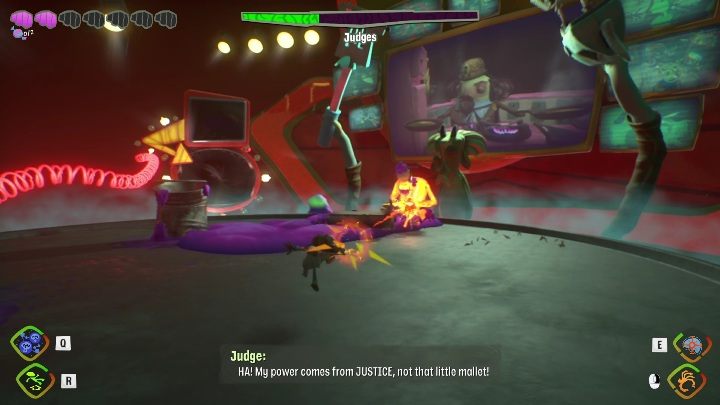 After getting all three ingredients, you'll have to fight normal enemies once again. Defeat them all to reach the finale of the battle. 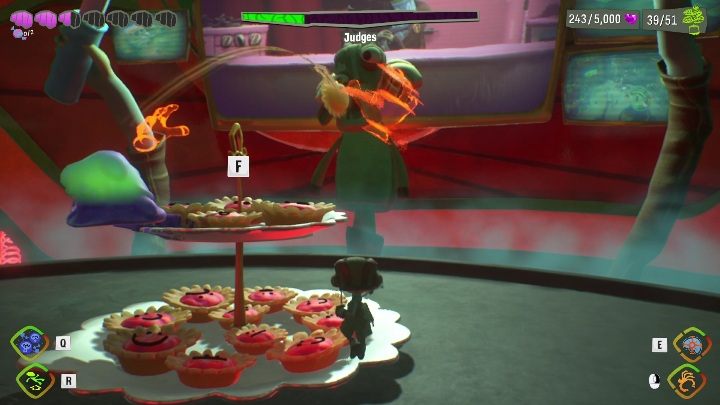 This final section is the same as the previous ones. Throw the dish at the boss to finally kill him. This will end the battle.